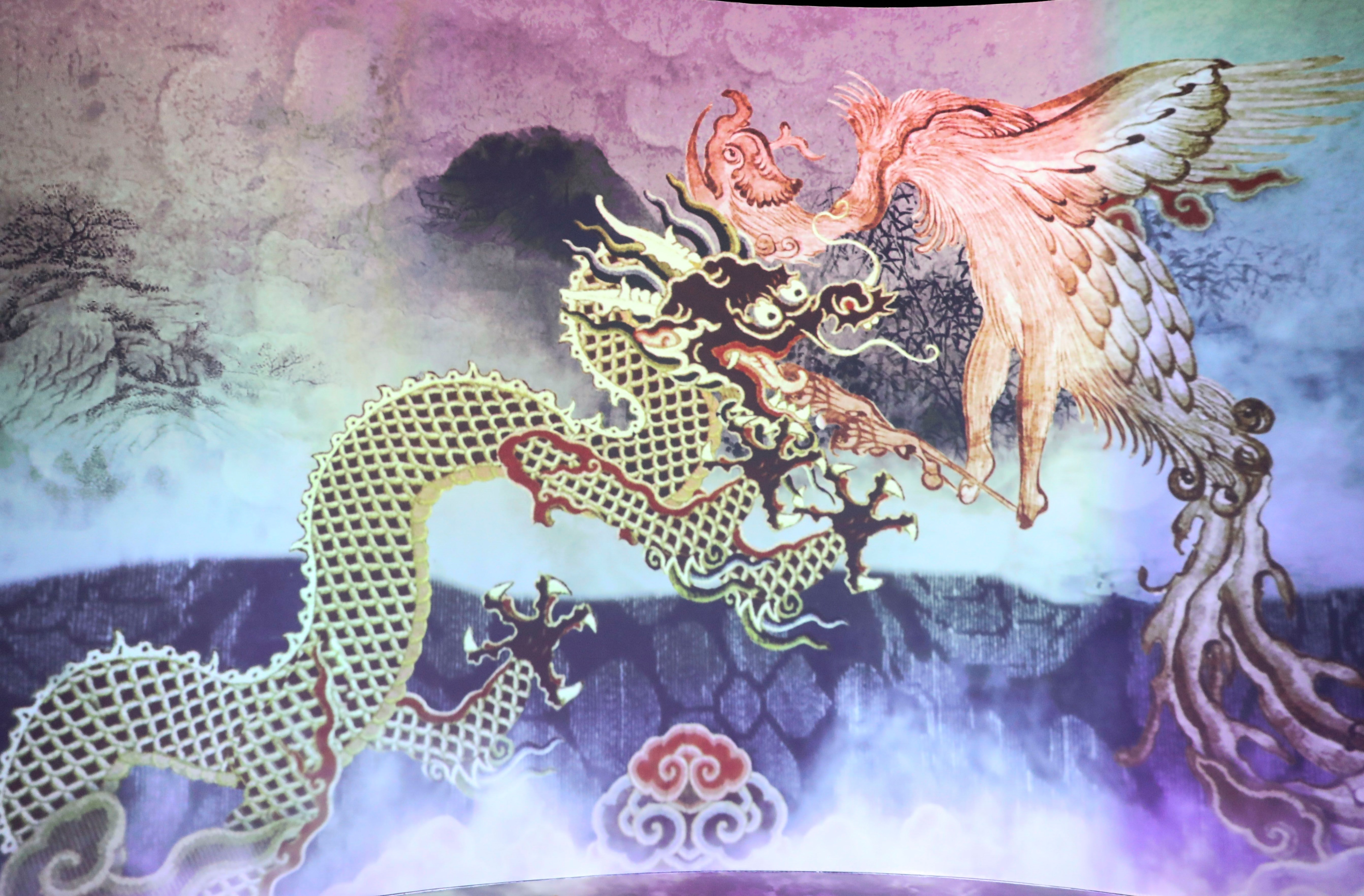 A 14th-century silver-encrusted copper alloy ablution basin stands next to a smaller porcelain pendant in a new exhibit at Louvre Abu Dhabi, which opens Wednesday.

The metal basin, created somewhere within the borders of Egypt and Syria, is a prime example of craftsmanship dating back to the Mamluk era, but with an added hue. Alongside the squat Arabic calligraphy inscribed on the interior and exterior walls of the receptacle are engravings of lotus flowers, a recurring aesthetic motif in Chinese art.

In contrast, the porcelain basin was made almost a century later in China. Adorned with cobalt blue floral designs, the artwork has a unique Islamic shape and color, but with Chinese artistry and porcelain production craftsmanship.

Side by side, the two artifacts echo the centuries-old fascination between the Islamic world and East Asia. Cautious combinations like these are abundant in the exhibition, which features paintings, silverware, glassware, manuscripts and luxury fabrics, showcasing the mosaic of influences the two regions have shared. across land and sea for nearly 1,000 years.

Dragon et Phénix – Centuries of exchanges between the Chinese and Islamic worlds is organized with the National Museum of Asian Arts – Guimet, better known as the Guimet Museum, in Paris. The dragon and the phoenix embody two cultures: China, the dragon, and the Islamic world, the phoenix.

The exhibition brings together 240 works from 14 institutions in China and France to retrace cultural exchanges between East Asia and the Islamic world from the 8th to the 18th century.

“It is the story of two civilizations that meet and exchange by land and sea routes. The history of ideas, goods, works of art and raw materials exchanged along these routes, ”says Souraya Noujaim, scientific, curatorial and collection management director at Louvre Abu Dhabi. The National. “It is an untold story, an extremely rich story between China and Islamic lands.

Organized into five sections, “the exhibition begins in the 8th century, at the time of the meeting between the Abbasid caliphate and the Tang dynasty,” she says.

Noujaim supported Sophie Makariou, president of the Guimet museum, in the curatorial office of the exhibition, alongside Guilhem Andre, also from Louvre Abu Dhabi.

7th century terracotta figurines are the first items visitors see before entering Dragon and Phoenix. Part of the introductory section of the exhibition, the collection shows figures with exaggerated expressions and in a range of colorful clothing – figures one might encounter along the Silk Road. In particular, the collection features figures of camels in polychrome clay, made as burial pieces in northern China during the Tang dynasty.

“The introductory section takes us down the Silk Road,” explains André, chief curator of Asian and medieval arts. “These channels of exchange were not only about the trade of goods but of ideas and religions between China and the Islamic countries.”

The network of sea and land routes that became known as the Silk Road was established around 130 BC, when the Han Dynasty in China opened up trade with the West. The so-called Silk Road, says Andre, was at its peak in the 8th century and would serve as the basis for the flourishing of cultural exchanges to follow.

The first section of the exhibition opens in the 8th century, coinciding with the creation of the Abbasid Caliphate, which ushers in an era of peaceful relations between the Islamic world and China.

There are earthenware from the region featuring the tricolor glaze technique often associated with the Tang Dynasty, while ceramics from China feature intricate patterns of cobalt blue, a pigment used in ancient Egypt but popularized during the Abbasid era.

“The technique was quickly exported to China, which put it to good use,” explains André.

The exhibition then moves on to works of art between the 11th and 13th centuries. This period is particularly interesting, says André, because it marked the time when the overland routes of the Silk Road were cut off due to invasions by nomadic forces. However, this territorial division only reinforced maritime exchanges between East Asia and the Islamic world, stretching from Canton to Basra.

The mid-thirteenth century is marked by one of the bloodiest chapters in the region’s medieval history: the Mongol siege of the city in 1258. The invaders committed several atrocities during the attack, during which tens of thousands of people have been killed. The attack dealt a fatal blow to the Abbasid Caliphate, which had ruled the region since 750. However, the Pax Mongolia (Mongolian Peace) that followed was “conducive to an unprecedented development of commercial and artistic exchanges”, perhaps. we read on the didactic wall panel of the exhibition. .

And perhaps it was at this point in Dragon and Phoenix that the exhibition title really blossomed as the motifs spread along the territories controlled by the Mongol dynasties, which included China and part of the Islamic East. The phoenix and the dragon, representations of the empress and the emperor in Chinese imperial iconography, began to appear in the decoration of the Islamic East.

Among the highlights of this section is a gold cup with a dragon-shaped handle, made during the reign of the Yuan Dynasty in the 13th century. The work is placed next to a larger, more bulbous variation in black jade. Also sporting a dragon hilt, the coin originates from Central Asia or Iran and dates from the second half of the 15th century.

This section also presents Chinese handicrafts specially designed for the Islamic market. These include a large 14th-century porcelain serving dish, which is embellished with geometries often found in Islamic designs.

Business ventures between China and the Islamic world intensified in the 15th century when the Ming Dynasty strengthened its rule over East Asia. The period that followed saw the increased use of sea routes. The Chinese influence on the art of the Islamic East was illustrated by the theme of the fight between fantastic beasts. A flaming chimeric animal known as the qilin was a case in point – found in artwork and brocades throughout the exhibit.

In turn, as trade between China and the Ottoman Empire intensified, artists drew inspiration from Chinese ceramics and textiles, incorporating their own artistic practices into the materials.

“The art of writing is something that is shared between the two civilizations,” says Andre. “The use of calligraphy as an art almost disappeared from the Western world after the increased use of printing techniques. But it has remained as the main form of art in Chinese and Islamic civilizations.

The exhibition ended in the 18th century as European cultural and economic influence began to emerge. By this time, Western explorers had already established an increasingly important position on regional trade routes, even between the Chinese and Eastern Islamic worlds.

But Dragon and Phoenix don’t fade into a conclusion, but rather into an immersive experience that pits viewers against each other in a bestiary of fantastic beasts. Dragons and phoenixes, animated from drawings of artifacts, traverse fiery, aquatic and aerial realms in a fascinating experience for adults and children alike.

“The installation is meant to help people discover these patterns in a new way,” says Andre. “Create an experience that embraces the artwork and leaves a lasting impression. “