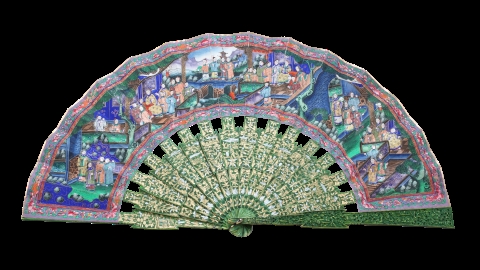 The ancient Chinese transported silk and tea to the West via the maritime silk route amid booming trade and trade by ship.

Under the influence of eminent personalities, including Marco Polo (1254-1324), Zheng He (1371-1433) and Matteo Ricci (1552-1610), mutual exchanges along the maritime silk route reached their peak. Chinese craftsmen produced a large number of products that integrated Chinese elements with Western design for European customers.

Now, the Hangzhou Museum is displaying a wide range of chinoiserie-style antiques and artifacts until May 22. Visitors can learn about the ancient trend of chinoiserie in the West through the exhibits.

Before the 15th century, the long distances and scarcity of Chinese products made Europeans fantasize about China.

Marco Polo, Venetian merchant and traveler, left a detailed chronicle of his experience during the Yuan dynasty (1271-1368) in China. His description of China as a prosperous country would have reinforced Westerners’ desire for the Orient.

In the Ming Dynasty (1368-1644), the imperial court sent Zheng to the Atlantic Ocean with the aim of establishing sovereignty, promoting foreign exchanges, and developing friendly relations with Western countries.

Her seven voyages covered more than 30 countries and regions in Asia and Africa, creating a miracle in world maritime history and heralding the new chapter of the era of exploration in the 15th century.

From the end of the 15th century to the first half of the 16th century, Portugal and Spain took the initiative to open maritime routes to Asia thanks to the efforts of navigators such as Barthélemy Dias, Ferdinand Magellan, Christopher Columbus and Vasco da Gama. European countries also began to trade with the East through sea routes.

Thanks to the boom in trade with China, the chinoiserie style became popular in Europe. Decorative arts, garden designs, and everyday utensils that were iconic Chinese products were characterized by exuberant, asymmetrical ornaments and patterns with distinctive Chinese elements.

A large amount of Chinese goods were transported to the West, which in turn gave a boost to the chinoiserie trend. In order to meet the European fascination with Chinese products, exported crafts were decorated with a variety of Chinese elements.

In 1577 the missionary Matteo Ricci left Italy for his arduous journey to the East. He arrived in Macau in 1582 and finally reached Beijing, the capital of the Ming dynasty, in 1601. He worked with Chinese astronomer Li Zhizao (1565-1630) and scientist Xu Guangqi (1562-1633) the following year to create the Grand Universal Geographical Map, the oldest known world map in Chinese.

The European-style map was 1.52 meters high and 3.6 meters wide. Only six original copies have survived to this day. The map has significantly changed the Chinese people’s perception of the world.

The Qing Dynasty (1644-1911) recruited experienced merchants to establish the Thirteen Canton Hongs in Guangzhou, Guangdong Province, as the only legal organization to trade with foreign countries.

The highlights of the exhibition are the Qing dynasty fans inspired by Manchurian officials. When foreign emissaries came to China centuries ago, they used paintings and literature to record the lives and gardens of local officials.

Over time, the image of Manchu rulers became a symbol of China in the West. Known as Mandarin Fans to Westerners, these featured stylized designs based on European consumer tastes and impressions of China.

They were often mass-produced. According to archival documents, the British East India Company ordered 80,000 fans from Guangzhou in 1699.

At the same time, business cards became popular in Europe. Chinese merchants found a new business opportunity and began producing card cases in a variety of materials, including silver, wood, lacquer, and shells.

Chinese merchants also found opportunity in the tea trade, as the popularity of tea created a demand for teaware in Europe. The displayed pots and cups, which are different from traditional Chinese ceramic tea vessels, feature a rococo style with distinct Chinese elements.

Exhibition “From Hangzhou to London”

Dates: until May 22, closed on Mondays

WHY GOTA MUST GO – The Island

a new stage in the CPEC