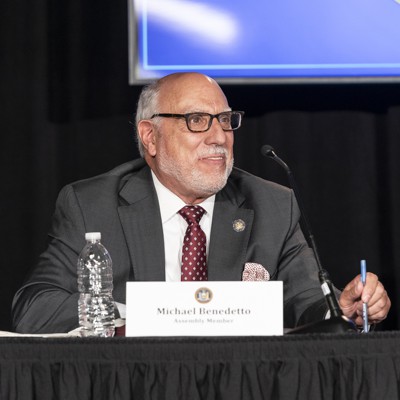 Activists have returned to Albany, and some lawmakers don’t like it

A recent heated meeting between Bronx Assemblyman Michael Benedetto and housing activists showed how in-person political controversies are picking up as public health restrictions are lifted at the state Capitol.

About a dozen people supporting eviction legislation for cause appeared unannounced around noon on March 9 at Benedetto’s office in the newly reopened Legislative Office building in Albany. Benedetto agreed to meet them in a conference room. They asked him why he did not officially support the bill. He said he was still thinking about it. The activists started shouting and singing. Benedetto then left the room, according to the videos shared with the city and the state.

The Good Cause bill has become a cause celeb for the political left because of how it would expand tenant protections statewide by indexing rent increases to inflation and limiting terms and conditions. in which landlords can evict a tenant. Some local governments have adopted versions of the proposal in recent months and powerful unions like 1199SEIU support the idea. Albany leaders like Governor Kathy Hochul, state Senate Majority Leader Andrea Stewart-Cousins ​​and Assembly Speaker Carl Heastie — the so-called three people in a room with the most of power in state politics – have yet to support the proposal in the Legislative Assembly.

The argument did not come to public attention until Benedetto published a provocative video Tuesday, claiming he had been “bullied” by housing activists – who Benedetto said were targeting him as he ran for re-election. His response sparked a new round of controversy over whether he was overreacting or whether activists had overstepped the bounds of political civility.

“Maybe he doesn’t remember how Albany works when people are allowed in,” said Cea Weaver, campaign coordinator for tenant advocacy group Housing Justice for All, who was present at the 9 March, in a text. “It’s not bullying. It’s lobbying. It is a normal part of the political process.

Benedetto told City & State on Wednesday that he did not feel physically threatened by the activists, even though he felt they violated standards of decorum. “All these people chanting – and in my office and demanding that I sign the bill – can rightly be considered a form of bullying,” he said. “Other people, I would suspect, would be rather intimidated by the shouting.” Some of his colleagues have made similar criticisms in the past of activists and colleagues who have used direct action tactics in the legislative organization.

Some lawmakers on the political left say his bullying allegation is misplaced — to say the least. Good Cause Eviction supporters have less power than an elected official like Benedetto and therefore cannot, by definition, intimidate him, according to Democratic Socialist MP Emily Gallagher. “As elected officials, we need to recognize that being on Capitol Hill and having the ability to negotiate bills that impact people’s daily lives and the realities of their families gives us more power,” she said. in a text. “We cannot claim intimidation from our underprivileged voters.”

One of Benedetto’s main opponents — Jonathan Soto, a former campaign aide to Rep. Alexandria Ocasio-Cortez of Queens — aims to use the March 9 incident to his own political advantage. “Tenants and workers create the wealth of our society and it’s time for lawmakers to Benedetto accordingly,” Soto said. tweeted Wednesday morning, while outlining his intention to join activists outside the Benedetto district office in an effort to secure $1 billion to replenish the Excluded Workers Fund. Benedetto said he is still considering his position on this proposal and the law on evictions for cause.

Benedetto, who is white, will run this year to represent a neighborhood abutting the Long Island Sound that is predominantly black and Latino, according to a To analyse by the Center for Urban Research at the City University of New York Graduate Center. He is not among the Democratic lawmakers who have signed on as co-sponsors of the Good cause invoice, which has 22 supporters in the Senate from 63 member states and 58 supporters in the 150-member Assembly. The addition of his name and the names of other legislators targeted by activists would bring them closer to enough Democrats behind the bill to eventually convince legislative leaders to move forward.

Lawmakers disagree on whether activists went too far in pushing the bill, which some activists say is a matter of personal importance. Community organizer Nipa Sarker, an immigrant from Bangladesh, told Benedetto that there were many South Asians like her in her district who needed housing assistance before demanding that he support the project. law on March 9, according to video footage. And if Benedetto or other politicians don’t like the way activists plead their cause — like the lyrics, the shouting, the chants shown on video — so be it, she said. “Every time we raise the grassroots voice…they claim they’re being bullied,” she told City & State. “People are threatened with eviction.”