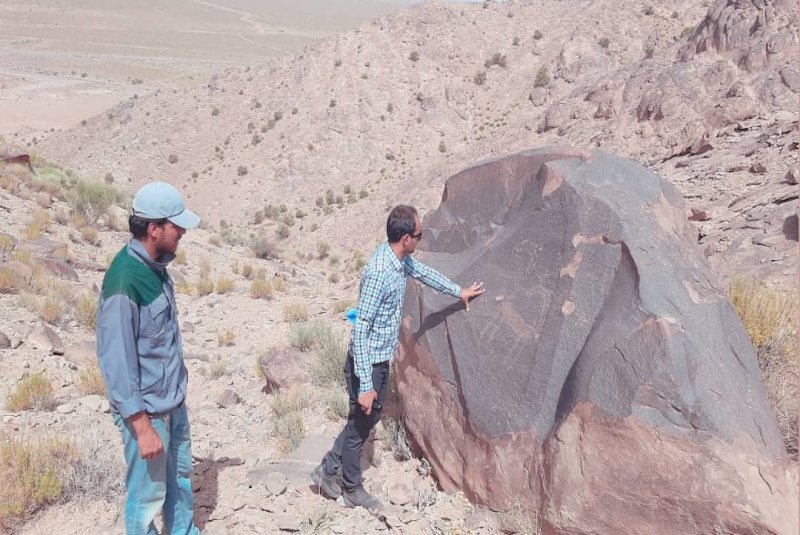 Tehran – Two ancient rock-carved petroglyphs were recently discovered in the eastern city of Khusf, which was once located on the ancient Silk Road, the tourism chief of Khusf has said.

A new layer of petroglyphs has been discovered in the area following recent rains and floods, CHTN said Wednesday citing Ali Salehi.

Located north of a small village in South Khorasan province, these petroglyphs were painted in a clever and purposeful way, the official explained.

These rock carvings are carved into volcanic rocks and depict mountain goats, horses, riders, hunting scenes and flowers, he added.

According to archaeologists, the newly discovered petroglyphs date back to between 2,500 and 3,000 years ago, during the Sagartian era, an ancient Iranian tribe, inhabiting the Iranian plateau, he noted.

South Khorasan is an explorer’s delight – plenty to discover but hardly another visitor to be found even at the most important sites (despite a decent infrastructure of recently paved roads).

The region alternates between arid mountains and semi-deserts and is famous for saffron and barberry. But there are also a host of old mud villages that appear to have been left almost complete as if to tempt archaeologists.

Currently, there are more than 40 countries along historic land and sea routes, which are collectively referred to as the Silk Road (or Silk Roads). However, this vast network transported more than goods and precious foodstuffs: the constant movement and mixing of populations also led to the transmission of knowledge, ideas, cultures and beliefs, which have profoundly marked history and civilizations. Eurasian peoples. .

Experts say that travelers along the Silk Road were attracted not only by the trade, but also by the intellectual and cultural exchanges that took place in the cities along the Silk Road, many of which developed in centers of culture and learning. Science, arts and literature, as well as crafts and technologies, were thus shared and diffused in the societies along these routes, and thus, languages, religions and cultures developed and influence each other.

For thousands of years, the ancient Silk Road has passed through many different empires, kingdoms, kingdoms and societies. According to UNESCO, the Silk Road enriched the countries crossed, transporting cultures, religions, languages ​​and of course material goods in the societies of Europe, Asia and Africa, and uniting them all. with a common thread of cultural heritage and plural identities. .