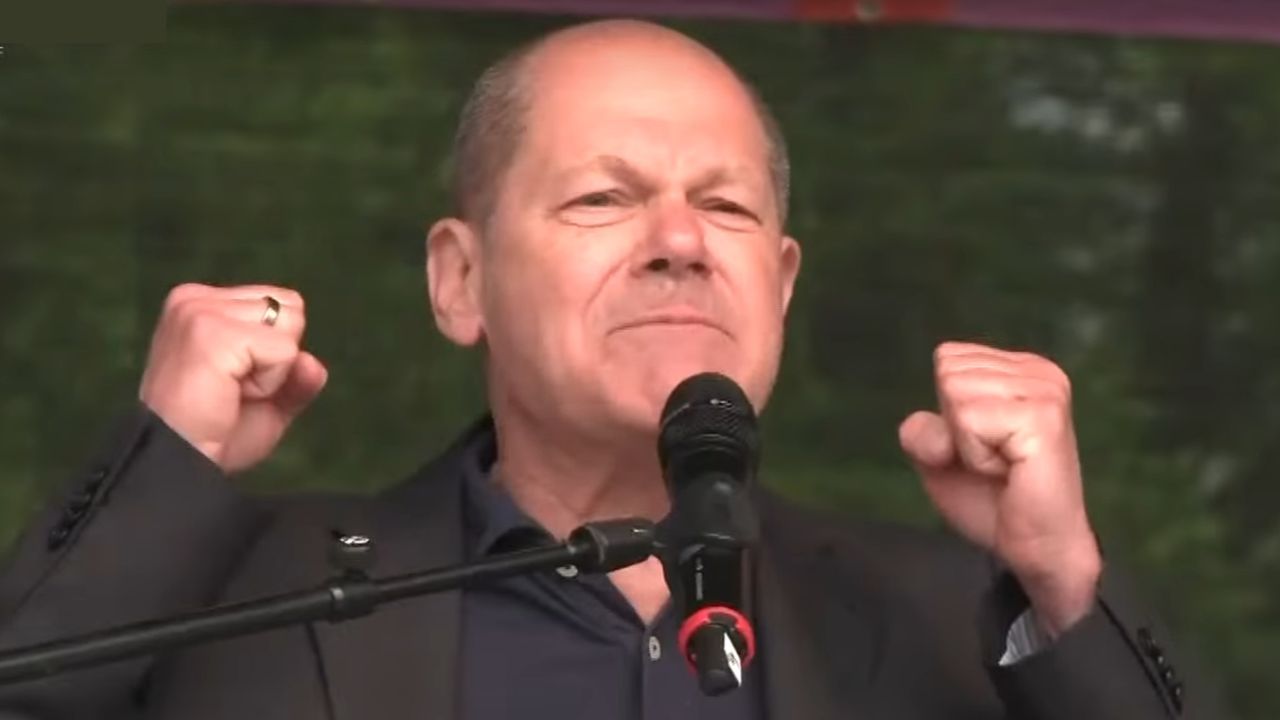 Anti-war sentiment widespread during May Day protests in Germany

Workers and youth used the traditional May Day rallies of the German Trade Union Confederation (DGB) to protest against the government’s war policy and the danger of a Third World War. The gigantic expenditures on rearmament by the Bundeswehr (armed forces) and the delivery of tanks and other heavy weapons to Ukraine have come under particularly fierce criticism.

At the Düsseldorf rally, Chancellor Olaf Scholz (Social Democratic Party, SPD) was called a “warmonger” and in Berlin, the city’s mayor, Franziska Giffey (SPD), was pelted with eggs.

As regional elections take place in a fortnight in North Rhine-Westphalia, Germany’s most populous and industrialized state, the DGB had invited the chancellor to be the keynote speaker in the state capital , Dusseldorf. Scholz wanted to deliver a demagogic speech to kick off the final sprint of the state election campaign.

He began by hailing May Day as a “day of international solidarity”, before declaring that the “common struggle for democracy, freedom and peace” required Ukraine’s full support. In addition to money and humanitarian aid, arms deliveries were also needed for this, he said.

From the start, the mood of the rally was hostile to Scholz and the wartime “traffic light” coalition government of the SPD, Liberal Democrats (FDP) and Greens. The many DGB officials, who had been sent in to provide friendly faces, could barely follow the chancellor’s words as the boos and shouts of “warmongers” grew louder. Signs and self-made banners read: “Nuclear war, are you crazy???” “Defuse instead of provoke!” “Olaf Scholz, not my chancellor” and again and again, “Warmongers!” »

Scholz, who normally reads his speeches quietly with all the charisma of an office manager, reacted wildly and aggressively. He tried to shout at his opponents, shouting at them, “I respect all pacifism. But it must seem cynical to a Ukrainian citizen to be told to defend himself unarmed against Putin’s aggression. It’s from another era. »

Scholz’s appearance in Düsseldorf made it clear that the government would not yield to mounting pressure from below, but act to suppress it in an aggressive and violent manner. Düsseldorf police are currently investigating unidentified people for grossly disturbing the gathering, analyzing video recordings to identify the disturbers.

The atmosphere of the Berlin central gathering mirrored that of Düsseldorf. In the capital, the opposition was not only directed against the federal government but above all against the government of the Land of Berlin. He had passed a new budget a few weeks ago and adopted massive austerity measures. The state government, made up of the SPD, the Greens and the Left Party, cut the budget by more than 40 billion euros to 36.4 billion euros this year and 35.7 billion euros next year. Above all, savings will be made in the already completely sick school system and in the health sector.

An election appearance the night before in Ahrensburg, near Hamburg, by Foreign Minister Annalena Baerbock (Greens) was also violently disrupted by protesters. (National elections will also take place next Sunday in Schleswig-Holstein.) Most young people attacked Baerbock with chants calling her a “warmonger.” Previously, an election rally with Baerbock in Lübeck was canceled as a precaution. It was reported that unknown persons had sprayed butyric acid there.

The DGB and its individual unions fully support the federal government’s war policy and the austerity measures introduced by the Länder (federal states). Two days after Scholz announced in the Bundestag (parliament) a 100 billion euro rearmament program and arms deliveries to Ukraine, the IG Metall union and the Federation of German Industries (BDI) issued a statement community in which they “categorically” supported the sanctions. measures against Russia.

But they are also acutely aware of the growing opposition to war in factories and offices, in the social sector, in hospitals, nursing homes and schools. Their dense network of union delegates keeps them informed on this subject.

The unions see it as their task to suppress this opposition. That’s why they tried to square the circle at the May Day rallies, managing to invoke peace while backing the biggest rearmament program since Hitler in a single speech.

At the rally at the Brandenburg Gate, DGB chief Reiner Hoffmann said: “Next week we will celebrate May 8 again. [the day Germany unconditionally surrendered to the Allies]. This day of liberation represents for us the symbol of the end of the Nazi reign of terror and the horrors of the Second World War. Never again war! This is the central lesson we draw from this terrible past.

The Russian attack on Ukraine, Hoffmann continued, undermined such “certainties that were thought to be certain”. In the face of Putin’s “military confrontation”, he said, there was a need to build “a new common European security architecture for the future”. “Without a doubt, the German government – ​​all of us – have a responsibility to make a substantial contribution to defense capabilities within the framework of the EU and NATO.

“Therefore, we say no to mass rearmament! he asserted. The permanent increase in the armaments budget up to NATO’s 2% target is unacceptable, he said. This money was urgently needed for “future investments in equitable shaping of socio-ecological transformation”. Military security should never be bought with social insecurity.

Finally, the DGB leader made it clear that opposition to the war would be accompanied by fierce wage battles and therefore everything must be done to keep the class struggle under control and suppressed.

He warned of the effects of inflation. Energy prices have reached “dizzying heights” and are no longer affordable for many, he said. The “energy relief packages” adopted by the federal government were necessary but not sufficient. Major collective bargaining disputes were imminent “for more than 10 million workers”. And this under conditions where everyone knows that 70 billion euros in dividends would be paid to shareholders in the coming weeks.

The DGB’s slogan for May Day this year was “Shaping the future together!” However, this call for unity is not addressed to the workers but to the employers and the government.

Unions are responding to growing opposition to war and the erosion of wages and the dismantling of social standards and jobs by approaching the government. All union representatives who spoke at the more than 400 rallies across the country invoked the close alliance with the government and the intensive partnership with employers and their organizations.

The unions are an inseparable part of the war coalition. They spread the false war propaganda of the government and the media, which places the blame for the war exclusively on Putin and holds the Russian people hostage to it. The well-paid bureaucrats at union headquarters refuse to oppose Putin’s reactionary invasion of Ukraine, even on a left-wing principled basis, which is also directed against NATO, the main warmonger.

The building of independent grassroots action committees now acquires great importance for linking the growing resistance of the working class against social attacks, against the policy of deliberate mass infection and against the danger of a Third World War and for launch a global counter-offensive.