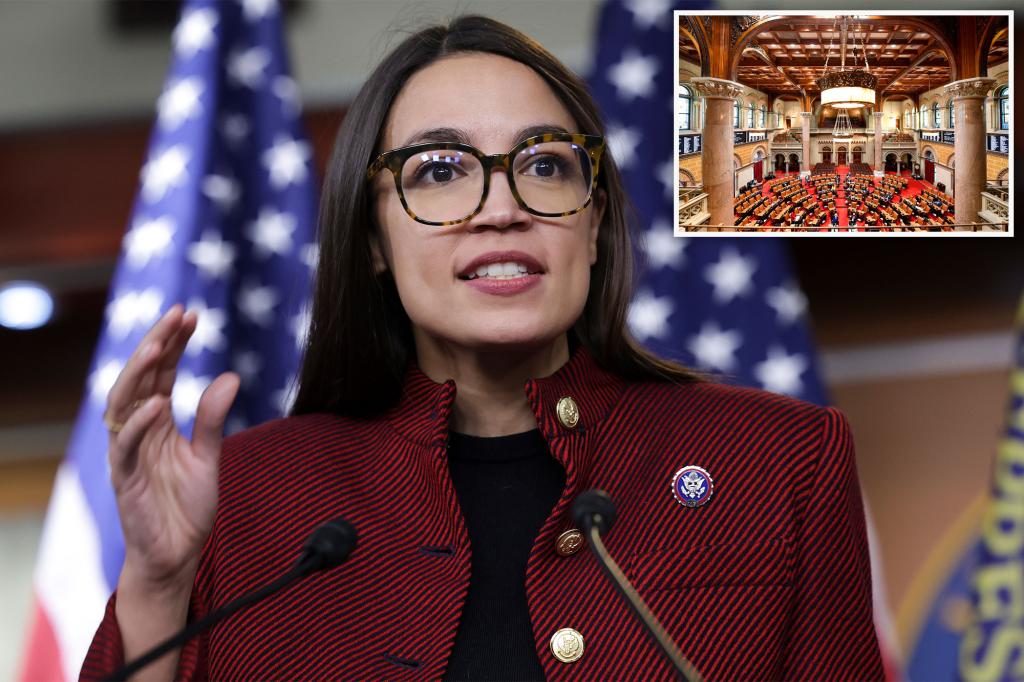 As New York City reels from the random killings of innocent subway riders and children playing on the streets, Socialist Representative Alexandria Ocasio-Cortez is pushing like-minded “defund the police” insurgents to Albany Democrats in primary session, The Post has learned.

The AOC announced on Monday that it is backing a slate of candidates to unseat seven Democratic incumbents in the party’s upcoming June 28 primary election.

In an alliance with the left-leaning Working Families Party, she seeks to defeat longtime incumbents with close ties to Assembly Speaker Carl Heastie, including fellow Bronx Assemblymen Jeffrey Dinowitz and Michael Benedetto.

Benedetto, a retired teacher first elected in 2004, is challenged by former AOC staffer Jonathan Soto. Benedetto accused the AOC of trying to hijack the Democratic-led Assembly with an anti-public safety agenda.

“I’m sure the AOC would like to see the Assembly be part of the democratic socialist movement to defund the police,” Benedetto said.

“AOC and its candidates will make New York less safe if they win.”

Yet, he said, AOC and Soto picked the wrong fight in the wrong district.

“The voters in my district are common sense people who are very, very concerned about the quality of life and the safety of the streets and are against a lot of the things Ms. Cortez is making noise about,” Benendetto said.

“I’m ready to fight for the job I love.”

AOC is also supporting insurgent Jessica Altagracia Woolford in the Riverdale section of the Bronx against party stalwart Jeff Dinowitz in the 81st District that encompasses Riverdale.

Meanwhile, she seeks to defeat Congresswoman Inez Dickens, who has deep ties to the Harlem Democratic establishment, and Eric Dilan, a stalwart of the Brooklyn Democratic party.

Instead, AOC supports Delsenia Glover, a longtime Harlemite and tenant leader and founding member of the Housing Justice for All coalition, against Dickens.

She also backed Samy Olivares in the 54th AD — who would be the first “genderqueer” state legislator according to the Ocasio-Cortez statement — against Dilan.

The AOC slate also includes immigrant rights organizer and Peekskill resident Vanessa Agudelo, who is running for an empty seat to replace incumbent Sandra Galef, who is not seeking re-election in the 95th AD in the lower valley of l ‘Hudson; Sarahana Shrestha on starting Kevin Cahill in the 103rd AD in the Upper Hudson Valley; and public school teacher Justin Chairs against incumbent Angelo Santabarbara in the Capital Region.

For an open seat in western Queens, she is backing Juan Ardila, who lost a primary to Councilman Robert Holden last year.

“These working-class candidates are running with guaranteed health care, affordable housing and climate justice for every New Yorker, but they face deep pockets: politicians backed by real estate developers, Wall Street and Big Pharma,” Ocasio-Cortez said Monday in the electronic fundraising blitz sent to supporters on behalf of his slate of candidates.

“Can you contribute $28 to these candidates so that we win a New York where everyone is fed, sheltered and cared for? Every dollar counts…. the roadblock to our issues of guaranteed health care, affordable housing, and climate justice are the corporate-backed incumbents in the other body of the state legislature, the New York State Assembly . Until we win a progressive State Assembly, none of our remaining issues will pass.