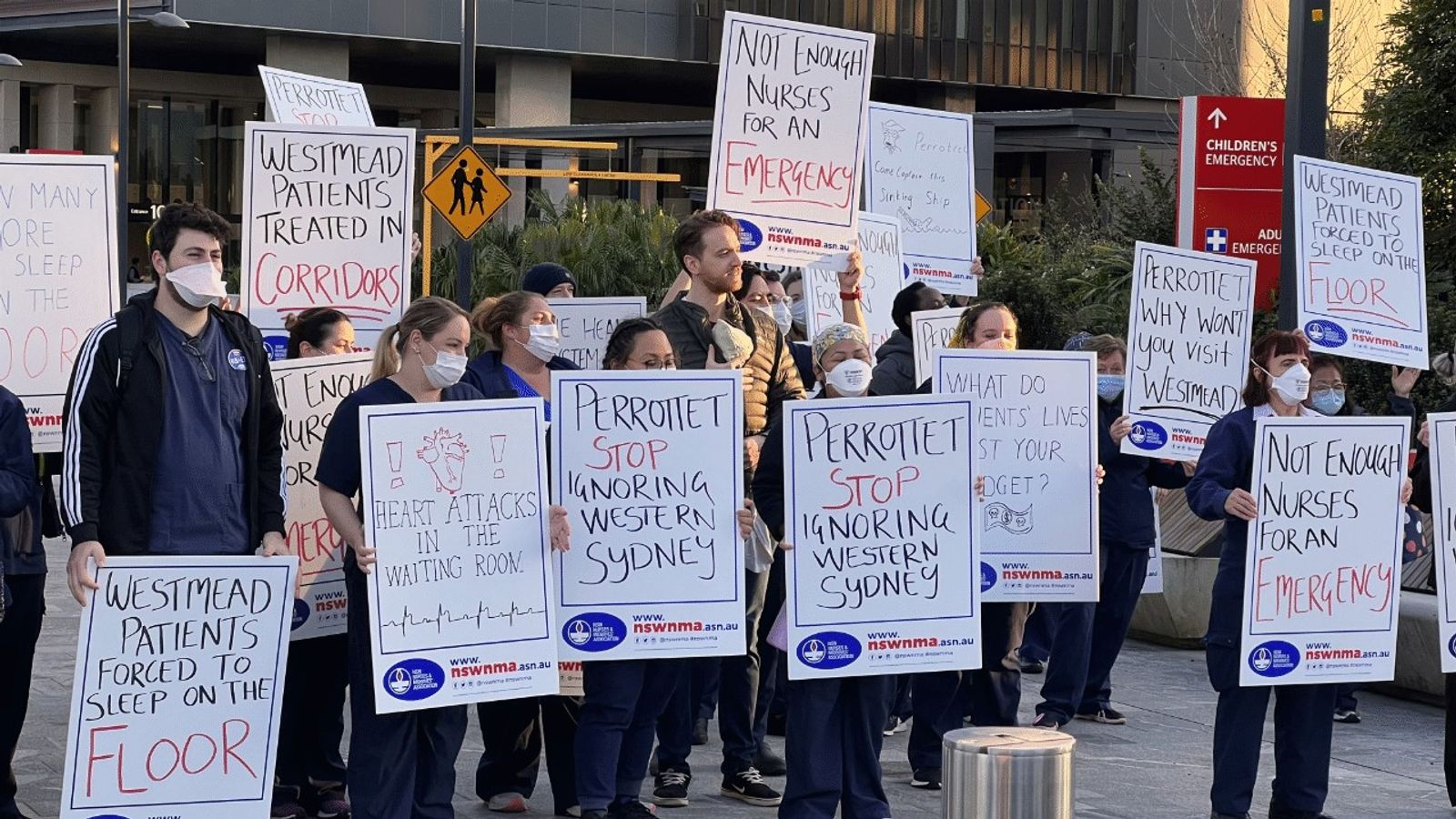 On Wednesday, some 50,000 public sector nurses and midwives in New South Wales (NSW) went on strike for 24 hours in their fifth statewide shutdown this year.

The nurses are demanding nurse-to-patient ratios per shift, staff increases and opposing state government demands to take a massive pay cut. The nurses’ vote in favor of strike, at 94%, is an expression of their determination to fight under conditions of complete collapse of the health care system, which has been brought to the brink by COVID “let’s tear it up” from all governments.

The Health Workers Rank-and-File Committee (HWRFC) fully supports the striking nurses. But we warn that another limited, union-controlled shutdown will solve nothing. The horrific conditions facing nurses – including grueling shifts, massive understaffing, wages that don’t even keep up with inflation, and the continued threat of COVID infection – will only get worse.

As with every previous strike, the union is dividing the nurses, with different rallies at different times of the day. The NSW Nurses and Midwives’ Association (NSWNMA) is determined to prevent a unified mobilization of nurses, let alone all healthcare workers, or the hundreds of thousands of public sector workers who face identical attacks on their employment, wages and living conditions.

The HWRFC puts forward a real perspective of struggle, in opposition to these union attempts to appease the anger of the workers, while blocking any real struggle.

Nurses, and all other workers, must take stock of their struggle. It will show that at every stage of the process the NSWNMA has isolated and divided them, while appealing to the Liberal-National government and harboring illusions in the pro-business Labor party.

This is because the NSWNMA, like all other unions, is not a workers’ organization in any real sense. Instead, it is a corporate agency of governments and corporate management, determined to impose the dictates of big business and the banks to make the working class pay for the capitalist crisis.

HWRFC is calling on nurses to take matters into their own hands by forming rank-and-file committees, independent of the unions, which the workers themselves control. This is the only way to unite nurses with other health care workers and reach out to other workers.

The HWRFC, together with the Committee for Public Education, is fighting for a common struggle of educators and health care workers, two key sections of the working class on the front lines of the COVID disaster “let it rip” and of the associated assault on wages and conditions.

The urgency for nurses to embark on a new path is demonstrated by the NSWNMA’s clear preparations to inflict another sold-out industrial deal that will not solve a single problem they face.

The sharpest warning is the union’s attempt to turn the nurses’ struggle into a complement to the Labor Party’s March NSW state election campaign.

The Labor Party announcement did not include anything about nurses’ wage demands of 7%. In addition, Minns repeatedly denounced the striking workers and made it clear that any public sector wage increase, even marginal and below inflation, must be linked to “productivity”, i.e. say to more onerous working conditions and greater exploitation.

NSW Labor’s program is fully in line with the business-friendly program implemented by Prime Minister Anthony Albanese’s federal Labor government. The Albanian government’s mantra is that workers must “make sacrifices” to reduce the national debt, accepting wage increases below inflation and the continued destruction of essential social services.

Labor’s federal budget, tabled in October, contained sweeping attacks on public health care, amounting to $755 million for this fiscal year and $2.4 billion over four years. Meanwhile, the Labor Party is pushing ahead with tax cuts for the ultra-rich and a massive increase in military spending in preparation for an aggressive US-led war on China.

Albanese’s program is not an aberration. For decades, Labor governments have waged an attack on public health care and education, aiming to subordinate them to the private market and cut public spending on behalf of big business. For decades unions have been the crucial implementers of this agenda, which they are now taking to a new level.

Recent events in Western Australia (WA) are a stark warning of what the NSWNMA would like to inflict on nurses in NSW.

In WA last week, the Australian Nurses Federation (ANF) tried to push through a sell-out deal with the McGowan state Labor government, which is pushing for annual wage increases of just 3% and not made no concrete commitments on the nurse/patient ratio. . The ANF only pulled out of the deal, for now, after its betrayal plans sparked mass anger among the workers it falsely claims to represent.

More broadly, all unions, including the NSWNMA, are implementing COVID “let it rip” policies, currently chaired by the federal Labor government, with the support of all state and territory administrations. Under this “forever COVID” program, there must be wave after wave of infection, with schools functioning as vectors of mass transmission and hospitals continually overwhelmed. This anti-scientific and homicidal agenda is driven solely by the demands of the corporate elite for the economy to remain “open” to ensure maximum lucrative business continues.

Across all sectors, in Australia and around the world, there is a growing sense of struggle and opposition from workers. But in any case, they come up against the unions, which function as a police force for governments and companies.

The repression of workers’ struggles by the unions opens the way to provocations and aggressive attacks on fundamental rights. Last Friday, maritime unions celebrated a Fair Work Commission ruling banning industrial action by Svitzer tug workers. Nurses and teachers unions this year agreed to fines totaling more than $100,000 for “illegal” strikes without a word to members, to stop workers demanding a fight against the sanctions.

Unions are enthusiastically promoting new industrial relations legislation proposed by the Federal Labor Government, which aims to “defuse disputes” by putting even more barriers on how workers go on strike and strengthening the powers of labor courts to intervene and impose business-friendly agreements.

The only way forward is the establishment of independent rank-and-file committees in all hospitals, schools and workplaces, to thwart the unions’ sell-out plans, circulate information, organize democratic debates and prepare a real counter -industrial and political offensive.

As part of this struggle, nurses and other categories of workers should formulate their own demands, based on their needs, not on what governments and big business claim to be affordable. The HWRFC offers the following demands as a starting point:

These claims can and must be won. But they pose the need for a political struggle against the unions, all the governments, labor and liberal-national and the prud’hommes.

The catastrophe facing health workers, like their education counterparts, inescapably highlights the need for a struggle for the reorganization of society as a whole. The situation in hospitals will only deteriorate as long as health care is subordinated to the profit demands of big business and the austerity agenda of the governments that represent them.

HWRFC advances the fight for workers’ governments that would implement socialist policies, including bringing banks and big business under public ownership and democratic workers’ control, and providing the billions needed to guarantee health care high quality audiences for all and a living wage. and conditions for those working in this crucial sector.