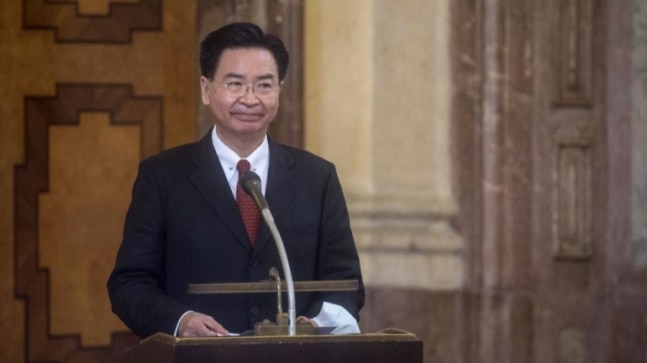 Wu’s defiant stance comes at a time when tensions between Taiwan and China are at an all-time high after Beijing took umbrage at a visit by US House Speaker Nancy Pelosi to the island state. and conducted large-scale military exercises that violated Taiwanese airspace. and territorial waters.

“Democracies must unite. China’s actions are not limited to Taiwan or the South China Sea. Australia concerned about China in Solomon Islands. China is building a base in Djibouti,” Wu said, detailing China’s growing hegemony in Asia and beyond.

“They targeted Taiwan this time, but they also targeted the disputed water in the East China Sea. And look at how they are expanding their power in the South China Sea. And that’s not it. They’re are also moving beyond the first island chain in the Pacific,” Wu added.

The Taiwanese foreign minister also referred to the economic and political crisis in Sri Lanka and said that China, through its massive infrastructure projects and loans to the island nation, had a key role to play there. .

“China’s actions in Sri Lanka are an eye opener. Look at Sri Lanka and I’m sure our Indian friends look at it in amazement. How can China bring about the collapse of Sri Lanka while taking control of its port,” the minister told India Today.

He went on to say that China was adopting the same strategy in Cambodia. China is doing the same in Cambodia right now and it is moving beyond the Indian Ocean to Africa, he said.

“Look at Djibouti and China’s ambition is not limited to that,” he added.

“We see what China is capable of. And therefore, all democracies, including India, need to work with each other to stave off the spread of authoritarianism. All democracies need to work together. We’ve seen Ukraine and we’ve seen the Taiwan Strait. It’s already clear that democracies around the world must unite. Otherwise, we fall,” he warned.

Wu’s strong condemnation of China and its geopolitical policies came against the backdrop of a visit to Taiwan by a bipartisan delegation of Japanese lawmakers. The delegation will be in Taipei from August 22-24, where they are expected to meet Taiwanese President Tsai Ing-wen to discuss the Chinese military’s recent live-fire exercises and consider how to improve defense and capabilities. bilateral relations. .

Minister Wu also spoke about Taiwan’s close ties with Japan and clashed with China over the issue of restricting Taiwan’s fruit exports to Hong Kong and Macao.

“Taiwan’s relationship with Japan has been very strong. Sometimes fruits from Taiwan are banned by China. For example, mangoes produced in Taiwan are very good. But sometimes the Hong Kong government or the Macau government have tested positive on mangoes. I don’t know how they find the mangoes’ noses to test or what their symptoms are, but they do,” he said wryly.

He added that Japan and Taiwan are cooperating in non-traditional security areas like cybersecurity.

Meanwhile, Taiwan has also requested India’s help to be included in Interpol after China blocked its entry.

China, which claims democratically-ruled Taiwan as its own territory, has held military drills to show its anger over Nancy Pelosi’s trip to Taipei earlier this month, blaming Washington for the tension.

In fact, Taiwan’s Defense Ministry said 17 Chinese aircraft and six Chinese ships were detected operating around Taiwan on Friday. He said that included eight planes that crossed the center line of the Taiwan Strait, which in normal times acts as an unofficial barrier between the two sides.

China says Taiwan is the most sensitive and important issue in its relations with the United States, and it has the right to ensure its security and defend its territorial integrity.

The government of Taiwan says that since the People’s Republic of China has never ruled Taiwan, it has no right to claim it or decide its future, which can only be defined by the country’s 23 million people. ‘island.