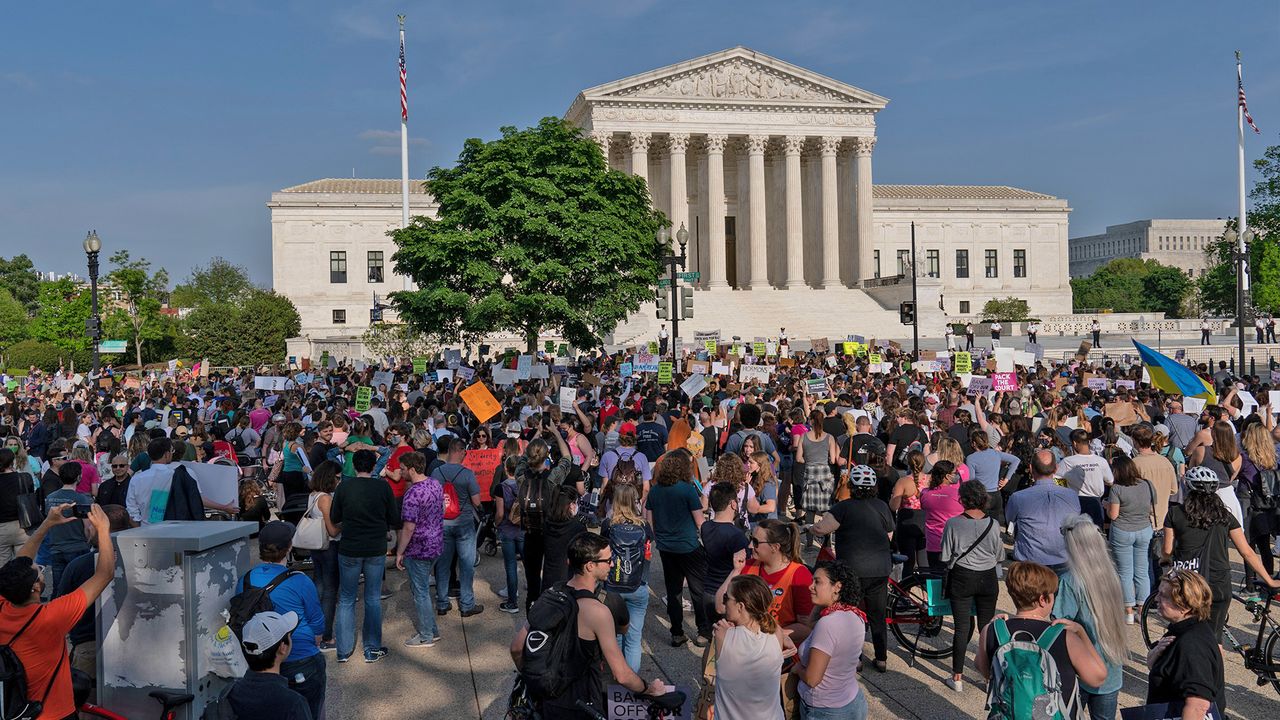 Having done nothing for decades to codify the now-overturned constitutional right to abortion or to prevent the Supreme Court from being filled by far-right Republicans, Democrats are seeking to exploit the court’s devastating attack. against democratic rights and women’s health to shake up votes for the November legislative elections.

On Friday, a week after the Supreme Court first struck down a constitutional right previously established in its Dobbs v. Jackson Women’s Health Organization decision, at least seven states have enacted abortion bans, according to a New York Times tracker.

Three other states – Utah, Louisiana and Kentucky – have attempted to enact anti-abortion laws, but have been temporarily blocked by court orders.

There are a total of 13 states — mostly in the South and upper Midwest — that have laws banning abortion at six weeks or earlier, most of which will go into effect in the coming weeks. Eleven other states have laws limiting abortions from six weeks to viability (24 weeks), including Wisconsin and Indiana.

There are 20 states that protect abortion at least until 24 weeks, mostly the West and East Coast, New England and most Mid-Atlantic states, plus Washington D.C.

There are six states with no active bans or legal protections: Michigan, Utah, North Carolina, Pennsylvania, Virginia and New Hampshire.

The total number of people living in states where abortion is banned or immediately threatened exceeds 170 million, or just over half of the US population.

During his press conference on Thursday following the NATO summit in Spain, President Joe Biden indicated that his main concern following the Dobbs decision is its impact on Washington’s ability to maintain NATO unity in conducting the expanding war against Russia in Ukraine and preparing for war against China.

Biden responded by denying any weakening of American prestige, but added, “The only thing that has destabilized is the outrageous behavior of the Supreme Court in overturning not only Roe vs. Wadebut essentially calling into question the right to privacy.

“We’ve been a leader in the world in terms of personal rights and privacy rights, and it’s wrong, in my view, for the Supreme Court to do what it did.”

In other words, the Court’s decision strikes a blow at the “soft power” of US imperialism as it undertakes the opening phase of a war to redivide the world, beginning with dismemberment and actual colonization of Russia.

Pressed by other reporters on his response to the court ruling, Biden said he would push for legislation codifying a federal right to abortion and, for the first time, said he would support the exemption the issue of the Senate’s filibuster rule, which effectively requires 60 votes to pass bills.

Before ending the press conference, he said the response to the Supreme Court’s “significant error” on abortion rights was to “show up and vote.” Vote off year and vote, vote, vote. This is how we are going to change it.

Biden’s change on the filibuster will have no practical effect, as he well knows, since at least two Senate Democrats – Joe Manchin and Kyrsten Sinema – have made it clear they oppose any change. in the anti-democratic procedure, stripping the Democrats of 50 votes. which they need in the equally divided room to change the rule.

Shortly after Biden’s press conference, Sinema’s office released a statement reiterating that the senator “is always opposed to the gutting of the filibuster on any topic, including reproductive rights.”

On Friday, Biden hosted an online meeting with nine Democratic governors, including those from states such as New York, Illinois, Colorado, New Mexico and North Carolina that are already experiencing an influx of desperate women in from states that prohibit abortion.

Some Democrats have called on Biden to declare a national health emergency and issue an executive order allowing federal properties such as military bases and Veterans Administration hospitals in states with anti-abortion laws to perform the procedure. Biden has rejected such moves, fearful of losing Republican support for his war policy.

The only action the administration has taken so far, beyond pledging to oppose Republican state laws criminalizing travel to other states for abortion services and defending access to medications Abortion Drugs by Mail, is the announcement of a meager $3 million in funding for health and social services. increase training and technical assistance for family planning providers.

Biden admitted he didn’t have 50 Democratic votes in the Senate to change the filibuster rule and warned Republicans would pass a nationwide abortion ban if they took control of Congress in the US election. November 8.

But other than tweaking his rhetoric, calling the Supreme Court “extremist,” he offered nothing new.

Some Democrats, like Sen. Elizabeth Warren, argue that abortion rights can be saved by electing two more Democrats to the Senate in the fall. It’s wacky.

The Democratic Party – a party of the American capitalist corporate/financial oligarchy and the American war machine – is incapable of defending democratic rights under conditions of expanding imperialist war, mass death as a result of pandemic policies of “herd immunity” from both parties, staggering levels of social inequality, and cuts to real wages and social services.

Since the Supreme Court ruling Roe vs. Wade in power in 1973, the Democratic Party controlled both houses of Congress for a combined total of 22 years, including the current Congress.

It never seriously attempted to pass legislation codifying Roe vs. Wade. Instead, he allowed Republican law to steadily erode abortion rights, including the 1976 Hyde Amendment, which banned spending federal dollars on abortion services. Biden supported the reactionary anti-working class measure until June 2019, when he reversed his position in order to secure the Democratic presidential nomination.

The same goes for the Voting Rights Act 1965. Since the Supreme Court struck down key enforcement provisions in 2013 under the Obama administration, Democrats have never seriously sought to enact legislation reversing the court’s action.

The Democrats will do nothing to defend abortion rights, just as they refuse to expose the massive conspiracy that led to the January 6 coup or hold accountable those who plot to install a fascist dictatorship led by Trump.

The struggle for abortion rights, like all other democratic rights, must be waged as a struggle for political independence and the mass mobilization of the working class on the basis of a socialist program.

7 On your side: Buy now, pay later loans are popular, but do they make sense?