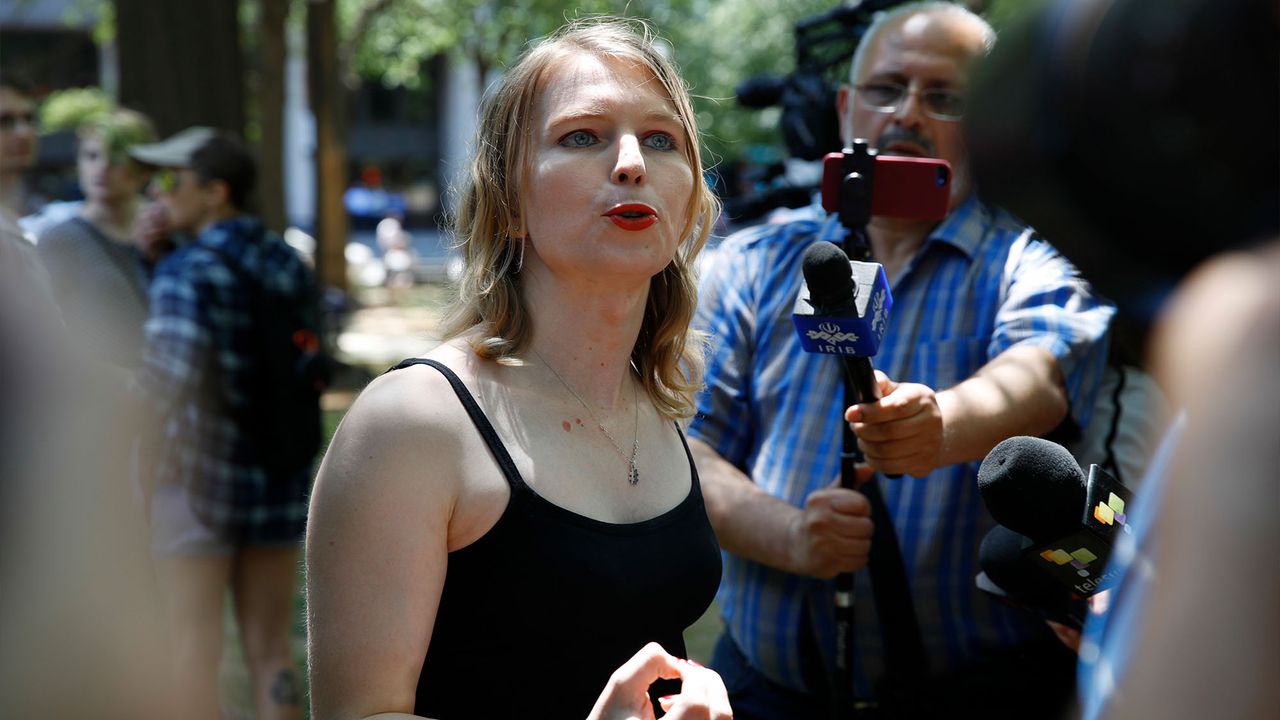 Once again, US whistleblower Chelsea Manning is rising to defend fundamental democratic principles under attack by a capitalist government determined to hide its actions from the public.

The Canadian government plans to argue that Manning should be permanently barred from entering the country during an Immigration and Refugee Board (IRB) hearing scheduled for October 7. The government claims Manning is inadmissible to Canada for “serious criminality.” citing section 16 (2) of the Information Security Act, 1985, which criminalizes “disclosing to a foreign entity or terrorist group information that the Government of Canada or a province takes measures to protect … “Canadian interests” results. Manning plans to challenge the constitutionality of the law, regardless of the outcome of the IRB hearing.

In the upside down world inhabited by Canadian government lawyers, “serious criminality” refers to Manning’s “use of a computer” to expose the crimes of Canadian and American imperialism in Afghanistan, crimes that the Canadian state would prefer to keep it hidden afterwards. of the humiliating retirement from Kabul last month.

In 2010, Manning, who worked as a US military analyst, posted hundreds of thousands of US military files and diplomatic cables from the wars in Afghanistan and Iraq to the WikiLeaks media organization. These revelations include the infamous “Collateral Murder” video, recording the crew of an American gunship as they slaughter a group of Iraqis in cold blood while expressing their frenzied thirst for blood.

More than 250,000 diplomatic cables leaked by Manning have exposed the inner workings of US and Canadian imperialism. The material she shared, including reports of the murderous rampages of American soldiers, torture and massive corruption, exposed the Canadian government’s claims that it was in Afghanistan to defend “human rights.” and “democracy” as a bunch of lies. Manning’s revelations, along with those of NSA whistleblower Edward Snowden, also laid bare the global espionage operations of the imperialist powers in which Canada, as a member of the â€œFive Eyesâ€ alliance led by the United States, plays a key role.

For her “crimes”, Manning was sentenced to 35 years in the US military high security prison at Fort Leavenworth and subjected to conditions bordering on torture for seven years, including solitary confinement. Her sentence was commuted by outgoing US President Barack Obama in 2017. Manning was then jailed twice for over a year as US authorities attempted to force her to testify in a secret grand jury case against the founder and jailed WikiLeaks journalist Julian Assange. Manning was fined $ 1,000 a day for extorting obedience. Manning categorically refused to give in to the pressure, saying, “Nothing will convince me to testify before this grand jury or any other grand jury.” The torture experience led Manning to make several suicide attempts, and she was released soon after.

In his constitutional challenge to Canada’s Security of Information Act, Manning, a person of astonishing political and personal courage, once again acts on principle, defending fundamental democratic rights. Her case has implications not only for her own freedom of movement, which she has every right to defend, but also for the practice of investigative journalism in Canada and around the world.

Pandemic election in Canada, resurgence of working class struggle and struggle for socialism

Manning’s attorneys write: â€œMuch of what the public knows today about the reality of the US ‘war on terror’ and crimes in Iraq and Afghanistan would have remained entirely secret without the whistleblower act. by Ms. Manning. The Respondent’s actions are part of a long tradition of public interest whistleblowing, without which many crimes and abuses by states and other powerful actors would never see the light of day.

The shifting approach of the Canadian government to Manning’s eligibility, by contrast, is utterly unscrupulous and reactionary.

Manning first attempted to enter Canada in 2017 and was refused after notifying Canadian border officials of her conviction. They equated the crimes with which she was accused under US law to “treason” under Canadian law and denied her entry.

In 2018, Manning entered the country for a few days for a personal visit and to speak at a conference. A government assessment of Manning at the time said his revelations “were of a time and place, little real damage resulted.” After returning to the United States, Canadian border services declared her inadmissible again after anonymous government officials intervened.

The next October 7 immigration hearing was requested by Manning herself. Canada Border Services has held his file since 2018, refusing to forward it to the IRB for the legally mandated admissibility investigation. The agency also secretly changed its legal justification for banning it from the country from “treason” to “violation of information security law.” This change in reasoning was only exhibited by a request under the Access to Information Act filed by his lawyers.

The attempt by the Canadian Liberal government under Justin Trudeau to portray Manning as some sort of infamous “criminal” is both absurd and hypocritical. For billions of workers around the world, she is a hero. She is now employed by the tech start-up Nym Technologies, where she designs non-piratable software for private communications, using blockchain technology.

Manning is not the kind of immigrant Ottawa has made security exceptions for in the past, or prioritizes in the present. In the aftermath of World War II, the Canadian state granted Cabinet-level exemptions allowing former Nazi scientists to enter Canada, as well as former members of the Ukrainian “Galicia Division” to enter Canada. the Waffen SS. One of the main architects of the Rwandan genocide, LÃ©on Mugesera, lived in freedom in Canada for years before being deported. In August, the Canadian state rushed to evacuate its thousands of Afghan war collaborators and â€œyes-menâ€ from Kabul. This crowd undoubtedly included a number of professional nail pullers, as well as performers, secretaries and assistants with first-hand knowledge of Canada’s actions in Afghanistan. The Canadian state is desperately trying to cover up its own crimes, so that new ones can be prepared.

Moreover, using an extremely broad interpretation of the law on information security, its ultimate target is not Manning, but the working class and the democratic rights won over the centuries. As the crisis of global capitalism intensifies due to the social, economic and political consequences of the COVID-19 pandemic, the Canadian ruling class becomes increasingly hostile to the very bourgeois democratic norms that have served as the basis of its government. in an earlier period. Like any other capitalist government, in order to defend the profit system, its policies take on an increasingly openly criminal and authoritarian character.

The government’s new interpretation of the Security of Information Act is so broad that reporting virtually anything could be criminalized if it embarrassed the government, or harmed a Canadian business or strategic interest. What if an Ottawa official reveals embarrassing or incriminating statements made by Cabinet ministers about handling the COVID-19 pandemic? For example, the Canadian equivalent of Boris Johnson “Let the bodies pile up by the thousands!” Â»Admission.

The federal and provincial governments of Canada are responsible for a criminal policy of social murder in the form of back-to-work and back-to-school campaigns, which have claimed up to 50,000 lives so far. And as the Canadian military withdraws from Afghanistan, the Canadian state and its American and British allies openly prepare for a global war against Russia and China.

The political sponsors of such policies are criminals. As the scale of their crimes increases, criminals will increasingly be forced to keep their decisions and actions secret. By challenging the constitutionality of the Security of Information Act the government uses to prevent him from visiting Canada, Manning is defending the right of Canadian workers to know the truth about what the government is doing. This basic democratic principle, which is essential for developing a mass movement of the working class against imperialist war, is now seen as simply intolerable in ruling class circles.

There is not a single public figure among the 338 politicians elected to Parliament last Monday who comes close to comparing political principles, personal bravery or integrity with Manning.

The New Democratic Party (NDP), which presents itself as a “left” party, has been silent on the persecution of Manning for a decade, as it has on that of Assange, who is slowly being tortured to death. in Belmarsh prison in England while the British and American governments attempt to concoct a false pretext for his extradition to the United States.

The NDP, which waged a totally fraudulent election campaign with calls to “tax the rich”, supported every measure of the Liberal government that enriches and empowers them. On issues of war and peace, the NDP has facilitated all increases in military spending by the Liberal government and calls on the Canadian state to “stay tough on China.” This political pillar of capitalism and imperialism will never lead to a principled challenge to its increasingly criminal imperatives.

The Socialist Equality Party (Canada) condemns the Canadian government’s use of the Information Security Act to ban Manning. We demand that she be freely allowed to travel and speak as she chooses. Workers and students who agree must contact us today and join the struggle for a socialist society, which demands the abolition of the artificial borders of the nation-state system, and the free movement of workers. and information.