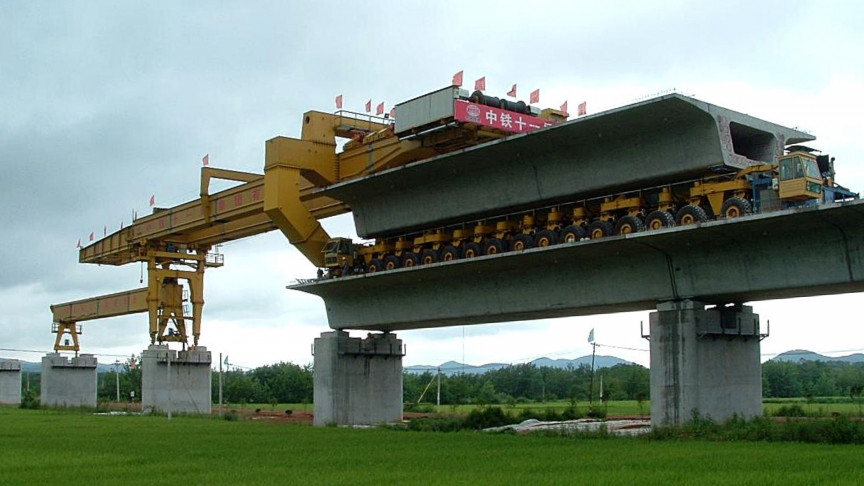 By launching the Belt and Road Initiative in 2013, China has proven to be the heir to the Silk Road tradition. The project includes land and sea routes that connect around 70 countries, or around two-thirds of the world.

What enabled China to initiate and carry out this project are the developed construction machines which not only speed up construction processes, but result in cost and resource efficiency. SLJ900 / 32, known locally as the Iron Monster, is a step forward in bridge building that lifts, transports and sets up pre-fabricated, full-length sections of track at the loaded speed of 3.1 mph (5 km / h), leaving no room for the long assembly process on site.

Over 2,000 years ago, the Han Dynasty established the Silk Road, a network of land and sea routes that built a bridge between east and west, turning China into a geoeconomic center. Inspired by the Silk Road, the People’s Republic of China launched the Belt and Road Initiative to connect Asia, Africa and Europe. The Silk Road Economic Belt, the Project Land Routes, connects East Asia, South Asia, Central Asia, Russia and Europe, while the Sea Route of the silk connects the Chinese coasts to Europe.

As the need for more land and water routes to complete the Belt and Road project increased, there was a demand for more progressive machines to accelerate the pace of this large-scale project. Therefore, Iron Monster, alongside other machines, was invented to achieve the goal of connecting three continents through a marine and land network.

Even though critics claim that this project is forcing Chinese debts on poorer countries to establish the Chinese world order, these inventions are still of great importance in construction engineering. Designed by the Shijiazhuang Railway Institute and manufactured by the Beijing Wow Joint Machinery Company, the SLJ900 / 32 builds long bridges with many spans at remarkable speed.

One of the real-life examples of SLJ900 / 32 is the world’s longest road-rail steel arch bridge project: the Yibin Jinsha River Railway Bridge. Before Yibin Jinsha, it took 12 hours to travel between Sichuan and Guizhou provinces in China, but now the estimated travel time has dropped to three hours. Another example, which is one of many high-speed train projects, is the one that connects Inner Mongolia and the rest of the country as part of China’s vision of a 30,000 km long high-speed train. .

The bridge girdling machine moves thanks to its 64 fully rotating wheels divided into 4 blocks. The construction process begins when it transports the beams from the very edge of the bridge to the point of installation, where they will be connected to a predetermined pillar. Then, using a pneumatic structure, the machine is docked to the first pillar to extend to the second, anchor there, and place the beam. Subsequently, SLJ900 / 32 continues the same steps with the new segment in tow.

Requiring far less human resources than bridge constructions using cranes, Iron Monster still requires a team to oversee the entire process in addition to cleaning and maintaining its various parts. The shift begins when the machine sets the segment and the whole process repeats until the bridge is completed.

The machine has proven to be effective, especially in large construction projects, including Belt and Road, due to the frugal use of human resources, the elimination of the cost of expensive scaffolding and the ‘acceleration of project performance. In addition, its weight of 640 tons (580 tons) forces the bridges to bear more than the maximum load, which is considered an unexpected added value and translates into more safety for the bridges built with this machinery.

Unfortunately, the money and technology used to build these machines would have to be repeated every four years because their lifespan allows them to lay around 700 to 1,000 bridge spans – the distance between two intermediate supports for the bridge – which gives them a longevity of about four years.

At the end of the world, it’s the hyperobjects all the way to the bottom