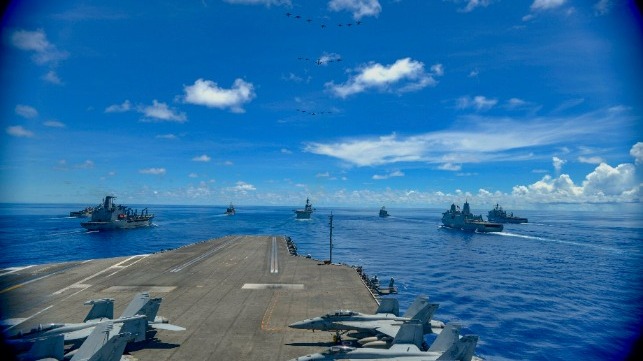 China and the United States strike the sword again as the mainland’s harassment of Taiwan continues with hundreds of fighter, bomber and submarine sorties near the island’s air and sea space .

President Xi Jinping made it clear that all options were on the table and warned the United States, NATO and the Indo-Pacific allies known as the “Quad” (United States, Australia, India, Japan ) to cease meddling in its own affairs. China has spent decades building the strength of the People’s Liberation Army and now doubts the United States has the will or the power to stop a forced reunification of Taiwan with mainland China, separated by the Taiwan Strait 160 km wide.

At the same time, the US military presence in the South China Sea has grown with the return from the Indian Ocean of the armada of warships known as the Ronald Reagan Strike Group, which provides security in the Strait.

The South China Sea is already on high alert as China annexes islands in the Spratly Archipelago, demands historic rights to Japan’s Senkaku Islands, and still claims its nine-dash shipping line across the Gulf of Tonkin and the South China Sea, which was refused by the Permanent Court of Arbitration in The Hague. The sound of a saber indeed!

As China positions itself aggressively with Taiwan and the United States, the issue is that the Chinese economy relies heavily on the South China Sea trade routes, which account for about a third of world trade and through which the majority of Chinese exports and imports.

China’s missteps on Taiwan could plunge the global economy into chaos and its economy implode. As President Xi Jinping and Chinese military leaders believe the time for Taiwan’s “reunification” is near, the United States and its allies will respond to keep trade routes open and secure.

With its economy in disarray as Xi imposes new restrictions on billionaire entrepreneurs and big business, China’s madness for Taiwan is like the final act of a psychotically depressed person. Xi wants to leave a legacy of unification, but China needs to be reminded of the economic consequences.

The views expressed here are those of the author and not necessarily those of The Maritime Executive.