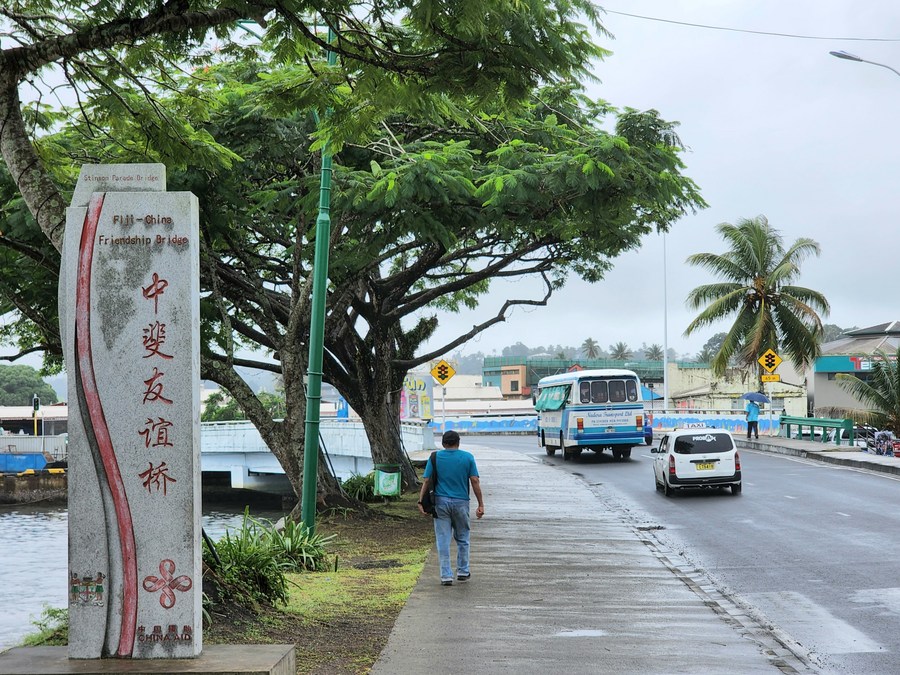 Photo taken on Aug. 11, 2022 shows the Stinson Parade Bridge in Suva, Fiji, a China-assisted bridge that opened to traffic in January 2018. (Xinhua/Zhang Yongxing)

“The BRI is an open, inclusive and shared development process, it is in the interests of both Pacific island countries and international development partners if they can work together and take concrete action,” Keshmeer said. Makun, university professor.

SUVA, Aug. 12 (Xinhua) — China’s proposed Belt and Road Initiative (BRI) has been warmly welcomed in Pacific island countries as it has helped boost their social and economic development over the the last decade, said a Fijian expert here. Thursday.

In an interview with Xinhua, Keshmeer Makun, a senior lecturer at the University of the South Pacific based in Fijian capital Suva, said the BRI has become a platform for win-win cooperation between China and participating countries. around the world, including the Pacific island countries located in the southern extension of the BRI, today important economic and commercial partners of China.

“To date, 149 countries, including the 10 Pacific island countries, have diplomatic relations with China, and 32 international organizations have joined the initiative. The world has already witnessed the expansion of China’s trade and investment ties with countries along the Belt and Road over the years. ,” he said.

The BRI, which includes the Silk Road Economic Belt and the 21st Century Maritime Silk Road, aims to build a network of trade, investment and infrastructure that connects Asia to Europe and to Africa along ancient trade routes.

“China has provided support for the development of infrastructure such as roads, hospitals and climate mitigation projects in Pacific island countries and has also pledged to support them in areas in need of support. “The tangible benefits of various projects and development assistance have boosted the relationship between the Pacific (island countries) and China to a new high,” he said.

Bula Mushroom Company staff members check the condition of mushrooms in Nadi, Fiji on May 11, 2022. The Chinese Juncao project has benefited many Fijians since 2014 when it was introduced to the Pacific island country. (Xinhua/Zhang Yongxing)

Chinese-led projects and enterprises have become part of the local economy of Pacific island countries, generating jobs and income for the people, he said.

The construction of the BRI continues to demonstrate strong resilience and vitality, providing strong impetus for global openness and cooperation and global economic recovery, he said.

Believing that China and Pacific island countries have great potential in their future cooperation, Makun said the two sides should work together to synergize the BRI with the recently launched 2050 Strategy for the Pacific Blue Continent, a sheet roadmap for sustainable development in the Pacific. Region.

“The Pacific Blue 2050 Strategy and BRI Green Development are win-win cooperation for China and the Pacific. In fact, they firmly commit to sustainability and demonstrate their social responsibility to the developing world,” he said. said.

He pointed out that China’s expertise and know-how in the field of renewable energy can be of great help to Pacific island countries which are rich in renewable energy resources such as hydroelectricity, solar energy and wind energy.

Makun also stressed the importance of climate change cooperation between China and Pacific island countries, saying China, as the world’s most populous country and second-largest economy, will be a key partner. to mitigate natural disasters and climate-induced risks, reduce poverty and achieve the goals of the United Nations 2030 Agenda for Sustainable Development.

“China is increasingly showing environmental leadership on the world stage, supporting the Paris Agreement on climate change and promoting a philosophy of reviving an ecological civilization. The BRI can offer a significant contribution to achieving the goals of the United Nations 2030 Agenda for Sustainable Development and the Paris Agreement,” he said.

Makun made it clear that the BRI is not a debt trap for participating countries, but a platform for mutually beneficial cooperation.

Developing countries like Pacific island nations need massive investment in infrastructure, and China can certainly help provide some of that, he said, adding that despite the myth of the so-called “trap of debt” raised by some media, the world has come to know that the BRI has a coherent set of principles where the situation “win-win”, rather than “win-lose” or “zero sum”, thanks to “all-round connectivity” becomes the ultimate priority.

The speaker urged international development partners to work together to help Pacific island countries meet their challenges as the BRI is an initiative for peaceful development, economic cooperation and it will make economic globalization more open, inclusive, balanced and beneficial. for everyone.

“The BRI is an open, inclusive and shared development process, it is in the interests of both Pacific island countries and international development partners if they can work together and take concrete action,” he said. -he declares. ■