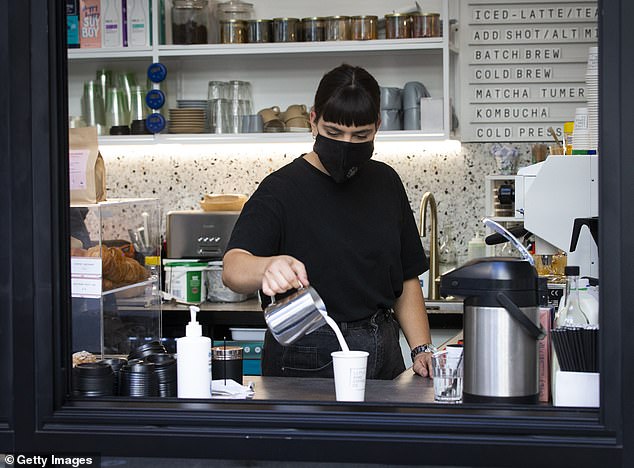 Covid Australia WA warns of new rules for the unvaccinated, McGowan tells them life will get ‘difficult’

Mark McGowan has warned unvaccinated Western Australians that they will be banned from pubs, restaurants, cafes and gyms when the state opens to the rest of the country on February 5.

The Washington state premier is expected to announce tough new restrictions this week for residents of the state who have not yet been vaccinated against Covid.

Mr MrGowan warned that the life of anti-vaccines would become “very difficult” for them when the vaccination passport system was launched.

Pictured is a masked worker at a Perth cafe. The unvaccinated population of Western Australia has been warned that they will be banned from entering pubs, restaurants, cafes and gyms as the state opens up to the rest of the country

A policeman at a border checkpoint on Indian Ocean Drive, north of Perth. Prime Minister Mark MrGowan warned anti-vaccines on Monday that life will “get very difficult” for them when the passport system for vaccines is launched.

As the state moves closer to 90 percent immunization rates, McGowan said eastern states are proof of what will happen if people continue to reject the vaccine.

“They won’t be able to go to concerts, restaurants, bars, cafes, pubs, fitness centers, gyms – all of those things will be restricted.”

WA recorded three new cases of Covid on Monday, but all were already isolated and non-infectious in the community.

The Western state’s rules for the unvaccinated are likely to mirror those introduced in Queensland, where anti-vaccines are banned from entering pubs, clubs, stadiums and festivals.

“Life is about to get very difficult for you… it is a great encouragement to go for the vaccine,” said Mr. McGowan.

Mr McGowan said the state has managed to navigate a Delta cluster and its last two Omicron outbreaks, but the virus will continue to find its way into Washington state.

“With the large number of cases in the rest of the country right now, this is putting pressure on supply chains in a number of industries,” he said.

As the state moves closer to 90 percent immunization rates, McGowan said eastern states are proof of what will happen if people continue to reject the vaccine.

“In the east, intensive care units are filled with unvaccinated people… even though it is a tiny proportion of the population, they are extremely over-represented,” he said.

Rapid antigen tests were finally approved for use in Western Australia on Monday after the federal government said RATs would designate a positive infection in a bid to reduce the wait time for PCR results.

Mr McGowan has asked residents to use the tests only when there are a high number of Covid cases in the state to help with the supply.

The state also made children under 12 eligible for the vaccine on Monday, as the new school year approaches.

The February 5 reopening date remains the biggest day on Western Australia’s calendar, however, with a reluctant Mr McGowan once again highlighting the problems that will arise from union with the rest of Australia.

“Nothing is perfect with Covid, as you have seen in the east, problems and problems are developing,” he said.

“There will be things that won’t be great, things won’t be perfect, but the good thing is that we were able to increase our immunization rate, but we need to increase it further.”