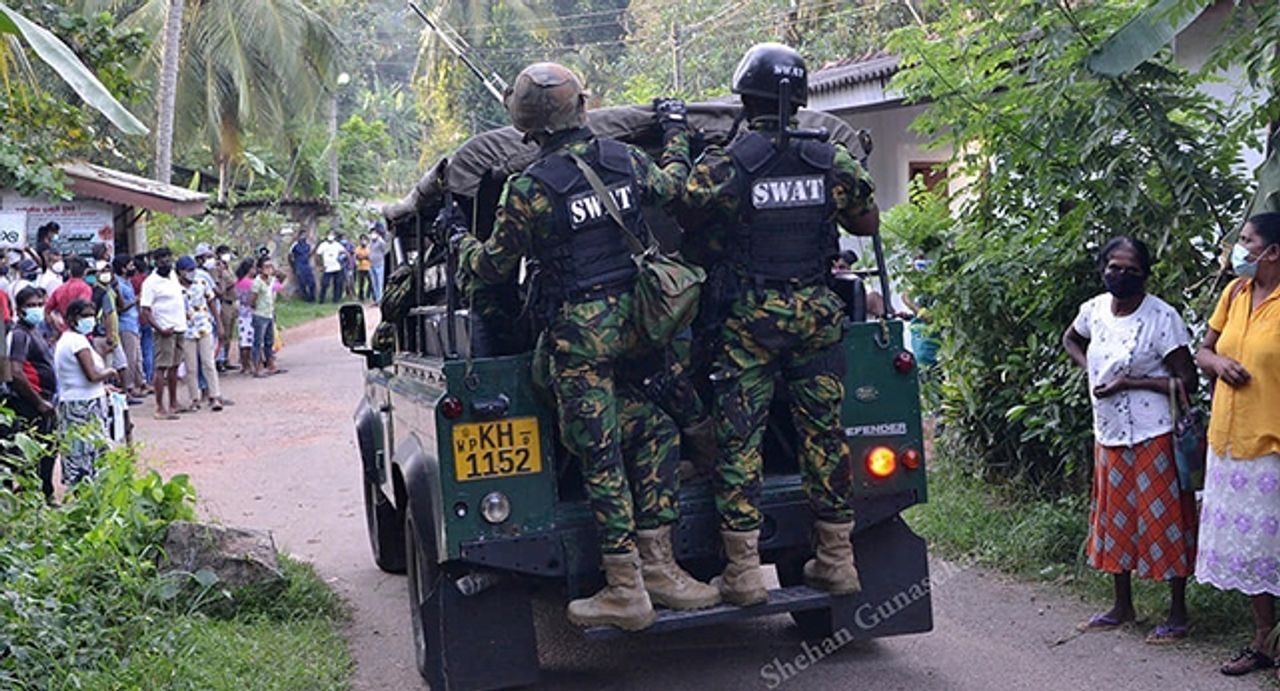 The draconian state of emergency proclaimed by Sri Lankan President Gotabhaya Rajapakse on August 30 must be seen as a warning to workers not only in Sri Lanka, but around the world. Faced with an upsurge in the COVID-19 pandemic and a growing international economic crisis, the capitalist class is setting up a dictatorship in an attempt to crush the growing struggles of the working class.

Rajapakse imposed a state of emergency amid a fall in the Sri Lankan rupee, food shortages and massive increases in the prices of major food items. One kilogram of rice and sugar have doubled to reach 250 and 220 rupees respectively. Buyers stand in long lines to buy sugar from the stores of the state-owned wholesale cooperative. Rajapakse says the state of emergency will ensure “public safety and well-being, as well as the maintenance of supplies and services essential to the life of the community.” However, it actually authorizes an extraordinary crackdown on working people and the rural poor.

He grants Rajapakse far-reaching dictatorial powers to take all measures “which he deems necessary or advisable in the interest of public security and the preservation of public order, and for the suppression of mutinies, riots or civil unrest, or for the maintenance of supplies and services essential to the life of the community. Rajapakse can thus amend or suspend laws, ban strikes or other struggles, outlaw political parties and censor the media.

Even before that, Rajapakse had enacted repressive laws, such as the Essential Public Service Act, enacted on May 27 and renewed last week, which bans strikes in almost the entire public sector, or nearly one million workers. . He also appointed several former and serving military officers to senior civilian positions. While schools are closed, most workplaces, especially export industries like the garment industry, are considered ‘essential’ and remain open as the island faces a wave of infections to COVID-19 due to the Delta variant. As a result, according to underestimated official figures in Sri Lanka, the total number of cases has exceeded 488,000 and the total number of deaths has exceeded 11,000.

These reactionary measures, however, came up against a rising tide of workers’ struggles. For more than two months, around 250,000 teachers in public schools have been on strike demanding higher salaries. Previously, workers in the health, post, rail, port, electricity, tourism and clothing sectors staged strikes and protests against economic hardship and dangerous health conditions during the pandemic. Unrest is mounting among oil workers over reductions in overtime and wages.

Rajapakse has now responded by stepping up his march towards a presidential dictatorship based on the army and right-wing fascist elements. The Sri Lankan ruling elite is particularly concerned that growing working class struggles are bringing together Sinhala, Tamil and Muslim workers, thus undermining the community divisions they have systematically instigated and stoked to safeguard their power.

In the face of growing threats of state violence and repression, the critical task is to politically mobilize the working class and to arm it with an understanding of the situation it faces. It is above all about explaining that the best allies of the workers of Sri Lanka are the workers of other countries and of the whole world. Indeed, the developing class struggles in Sri Lanka are part of an international rise of the working class.

Workers in various sectors including health, education, transportation and automotive in the United States, Europe, India, Australia and New Zealand have engaged in struggles, including strikes and demonstrations. protests for better wages and conditions and against unsafe health conditions during the COVID-19 pandemic. It is this force that must be mobilized to defend their Sri Lankan brothers and sisters in the fight against the draconian threats of the Rajapakse government.

In all countries, workers face the same basic problems – the same refusal to wage a scientifically founded struggle to eradicate the COVID-19 pandemic, and the same shift towards dictatorship by the ruling elite.

Former US President Donald Trump, encouraged by the Republican Party and sections of the military and police, is openly promoting a fascist movement. This led to the events of January 6, when crowds of his fascist supporters stormed the Capitol, trying to block Congressional certification of Joe Biden’s election victory. Although the January 6 coup attempt failed, fascist forces around Trump are continuing their plots and are in contact with Brazilian President Jair Bolsonaro, who is calling for a far-right coup to overthrow his factions opposing the judiciary and the political establishment.

The government of the Hindu-supremacist Bharatiya Janatha (BJP) party of Indian Prime Minister Narendra Modi is stoking chauvinism and far-right forces against Muslims and other minorities in order to divide and weaken the working class.

Sri Lanka’s history has shown time and again that in late capitalist developing countries the capitalist class is organically incapable of establishing democratic rule. Only the independent revolutionary intervention of the working class, rallying the oppressed masses at large, can solve these problems through a struggle for socialism of international scope. This was elaborated by Leon Trotsky, the co-leader of the Russian Revolution of October 1917 with VI Lenin, in the theory of the Permanent Revolution.

Sri Lanka has been ruled by emergency law for much of the three quarters of a century since it became formally independent from Britain in 1948. The Sri Lankan bourgeoisie has imposed a state of emergency. to prevent or attempt to crush every great historic eruption of opposition among the working people and the rural poor. This included the Hartal of 1953 (a general strike and the closure of businesses), the rural youth rebellion of 1971 and the nearly 30-year anti-Tamil racist war against separatist Liberation Tigers of Tamil Eelam (LTTE ) in 1983-2009.

The current state of emergency was imposed under qualitatively altered conditions, with a much more intense economic and political crisis of world capitalism. In every country, bourgeois power is discredited by the criminal and murderous policies of the ruling elites towards the pandemic, which place the profits of the business and financial oligarchy above human lives. Globally, the total number of reported coronavirus cases has risen to more than 227 million and the total number of deaths exceeds 4.6 million. Statistical estimates cited by the United Kingdom Economist magazine show that more than 15 million people have died from COVID-19.

All factions of the ruling class, Sinhala, Tamil and Muslim, are involved in this horrible policy and turning it towards dictatorship.

Opposition parties like the Samagi Jana Balavegaya (SJB), Janatha Vimukthi Peramuna (JVP) and the Tamil National Alliance (TNA), while making symbolic criticisms of the Rajapakse state of emergency, are silent on the threats to the democratic rights of workers and workers. The United National Party (UNP) did not even bother to criticize Rajapakse, tacitly supporting his dictatorial moves. All of these parties, as participants or supporters of previous governments, have a long history of approving a state of emergency and other repressive laws and IMF austerity measures against workers.

The great task is to arm and politically unify an international political vanguard as the working class enters into a direct political struggle against bourgeois power. In particular, it means unifying the Sinhala, Tamil and Muslim workers against the austerity and dictatorship policies embodied by the Rajapakse government. Above all, it means a struggle to establish the unity of workers in Sri Lanka with their class brothers and sisters in South Asia and abroad.

Discover 10 destinations in Thailand that will inspire writers