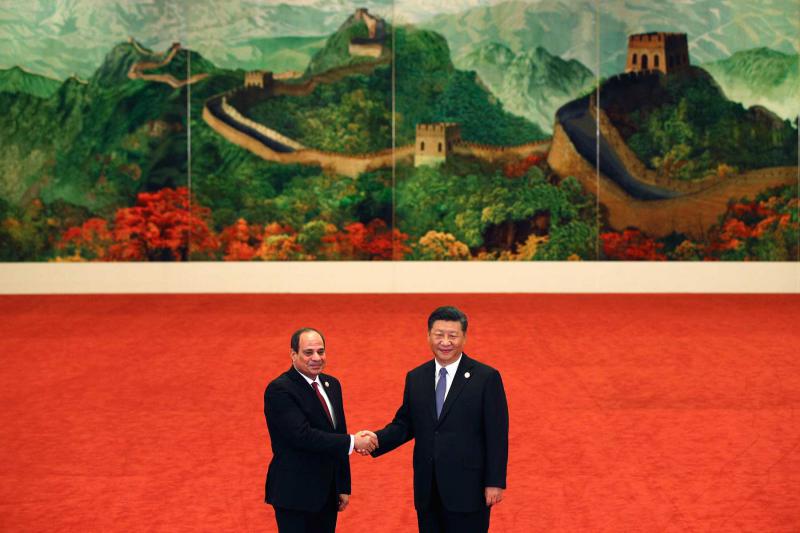 Eastern Winds of Change: A Guide to Egyptian-Chinese Relations


Eastern Winds of Change: A Guide to Egyptian-Chinese Relations

Cairo has always mastered the art of political acrobatics, playing off East and West against each other for its own gain. During the Cold War, it was former President Gamal Abd El-Nasser who first “shocked the West by approaching the Soviet Union, buying military equipment via Czechoslovakia and raising fears of a race armaments in the Middle East,” according to Foreign Policy.

Six decades later, Cairo is once again seeking to strengthen Eastern ties with Beijing while maintaining a complex relationship with Western allies and the United States.

Earlier this month, President Abdel Fattah al-Sisi met with his Chinese counterpart, Xi Jinping, in Beijing to take stock of the state of bilateral relations between Egypt and China. The two leaders discussed a myriad of political and economic issues in a bid to enhance the ongoing cooperation.

China and Egypt have ‘shared similar visions and strategies in defending their own interests’, Chinese leader Xi Jinping said on President Abdel Fattah al-Sisi’s seventh visit to the Chinese capital since taking office in 2014.

According to the Associated Press in Beijing, the meeting comes at a good time as al-Sisi’s government seeks to strengthen Chinese relations amid heightened scrutiny by the United States and Western states over the Egyptian government’s poor record. in matters of human rights.

Under Al-Sissi’s leadership, Egyptian-Chinese relations continue to intensify bilateral cooperation. This implies cooperation on the political, economic and security dimensions.

“Chinese investments in Egypt include a $1.8 billion cooperation portfolio that includes many development projects in the areas of electricity, health, education and vocational training,” confirms Mahmoud Sultan, financial analyst and professor at Cairo University.

Currently, about 85% of the $3 billion needed to complete the central business district (CBD) of the country’s new administrative capital – part of a massive project undertaken by the China State Construction Engineering Corporation (CSCEC) is being funded by Chinese banks.

The rapid development of key integrated land and sea trade routes has been a crucial part of Egypt’s “Vision 2030” and a hallmark of Egyptian-Chinese relations. Egypt’s priority on expanding the Suez Canal, as well as revitalizing existing overland trade routes, aligns perfectly with China’s Belt and Road Initiative (BRI). China’s BRI includes plans to develop a “Maritime Silk Road” that connects China to the Mediterranean via the South China Sea, the Indian Ocean and the Suez Canal.

At the start of the COVID-19 pandemic, economic ties between Egypt and China were strengthened by the signing of an agreement to jointly manufacture the Sinovac vaccine in Egypt.

In order to protect proliferating Chinese interests in Egypt and the Middle East region, involvement in regional stability has been mandatory for Beijing. It seems that China’s policy of non-interference is becoming increasingly difficult to maintain.

6 Egyptian Copy-Cat Series That Are Just Too Weird

Hotel Cecil: heritage by the sea

New York could decriminalize sex work. But will he do it in a safe and responsible way? | Geoffrey Mak

EDITORIAL | Did Japan do enough to save a citizen who died in a Chinese prison?