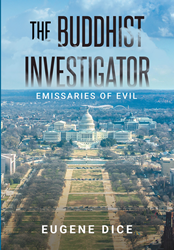 Eugene Dice, a retired environmental lawyer and Buddhist currently living in Hershey, Pennsylvania, has completed his new book “The Buddhist Investigator: Emissaries of Evil”: a gripping and powerful drama that keeps turning the pages until to its astonishing conclusion.

Frank Albert is a retired CIA agent who is now a private investigator in Pittsburgh, Pennsylvania. His secretary/assistant, Debbie, also plays an important role in the story as it unfolds.

Frank receives a letter from a young man, John Grabowski, who has been tricked into allowing a device to be surgically implanted into his body, which device transmits everything John sees and hears to the remote operator of the device. The device allows the operator to talk to John, and it can also inflict excruciating pain and nausea if John doesn’t follow its instructions. Frank agrees to try to help John, and the ensuing struggle is fraught with death and danger as Frank discovers the device was developed and is being tested under a rogue arm contract. of a federal government intelligence agency. The Chicago mob is also implicated as the armed arm of the unscrupulous doctor who is the mastermind behind the project.

Frank is a Buddhist and writes a blog on Buddhism, short excerpts of which appear at the beginning of each chapter. These are not part of the narrative but provide insight into Frank’s psyche and motivation.

Readers wishing to experience this captivating tome can purchase “The Buddhist Investigator: Emissaries of Evil” in bookstores around the world or online at Apple’s iTunes Store, Amazon, Google Play or Barnes and Noble.

For more information or media requests, contact Page Publishing at 866-315-2708.

Page Publishing is a traditional, full-service publishing house that handles all the complexities of publishing its authors’ books, including distribution to the world’s largest retail outlets and royalty generation. Page Publishing understands that authors should be free to create, and not bogged down with logistics like converting eBooks, setting up wholesale accounts, insurance, shipping, taxes, and more. Page’s accomplished writers and publishing professionals empower authors to leave those complex, time-consuming issues behind and focus on their passion: writing and creating. Learn more at http://www.pagepublishing.com.

Share the article on social networks or by e-mail: