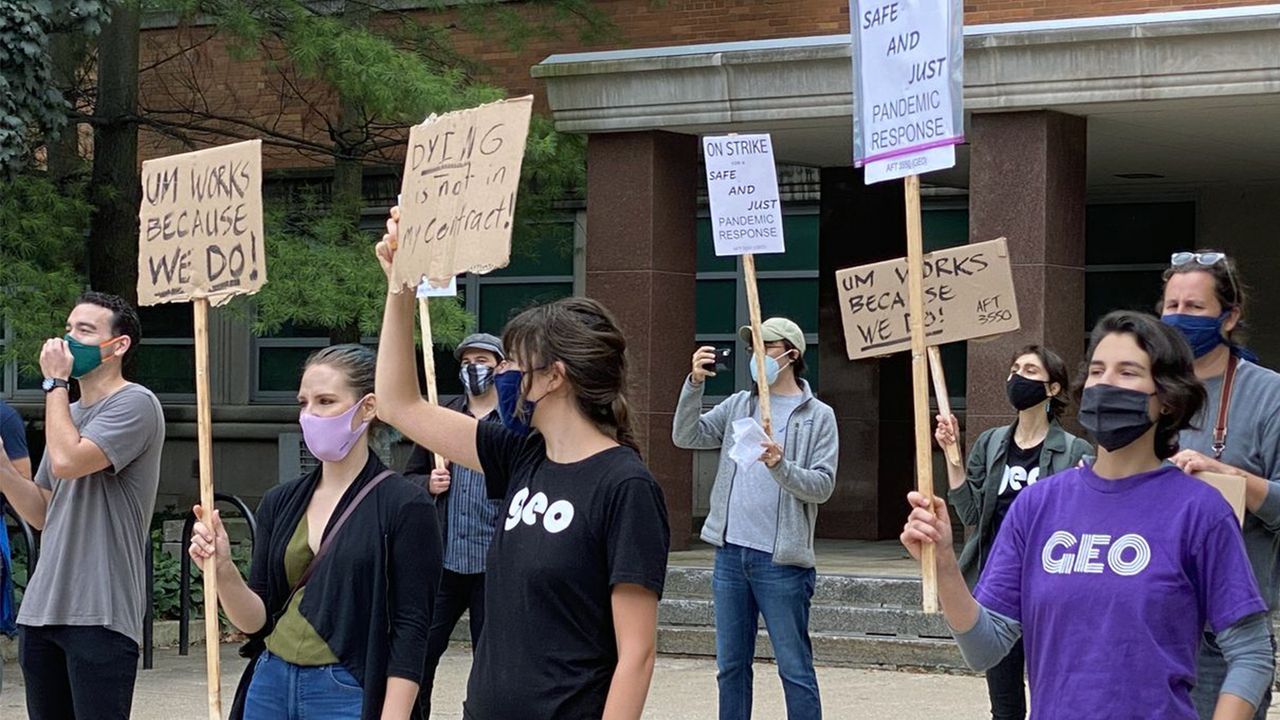 Fight for the eradication of the pandemic! Join the International Youth and Students for Social Equality!

At the start of the school year, the International Youth and Students for Social Equality, the youth movement of the Socialist Equality Party, calls on all young people to turn to the working class and fight for elimination and eradication of the coronavirus pandemic.

Since the pandemic began more than a year and a half ago, 4.5 million people have died worldwide, according to official figures, including more than 650,000 in the United States alone.

Despite false claims from politicians and the media, the pandemic is far from over. Fueled by the highly infectious Delta variant, new cases in the United States have reached their highest level since January: more than 164,000 per day. The death toll per day is 1,200 people.

Hospitals and intensive care units are once again overwhelmed with dozens of critically ill patients, including, most tragically, young people and children. Millions of unvaccinated children are currently being parked in overcrowded classrooms, even as new cases and child hospitalizations reach record levels. There have already been many tragic deaths of teachers who have recently returned to school.

College campuses are also opening up for in-person teaching, and there have already been widespread epidemics. At Duke University, where 98% of students and 92% of faculty are vaccinated, 349 students and 15 faculty and staff tested positive last week, forcing the college to end indoor meals. There have been similar outbreaks at the University of California at Berkeley and the University of Michigan, with each residence reporting cases.

The pandemic is the defining political experience for an entire generation of young adults in the United States and around the world. It has profoundly changed all aspects of our lives, marking the dividing line in the consciousness of millions of people: before and after the start of the pandemic.

For young people, as for the working class as a whole, it is essential to learn the lessons of this experience: How did this catastrophe come about? Who is responsible? What should be done ?

Since the start of the pandemic, the ruling class has rejected necessary and viable measures to save lives – globally coordinated closures, travel restrictions, universal testing and contact tracing, and isolation of those infected – because they carried attack on the wealth of the capitalist class.

In the United States, the policy of “herd immunity” – allowing the virus to spread unchecked – has been pursued by the Trump administration. The fascist plots of Trump and his henchmen, which culminated in the attempted coup of January 6, 2021, were ultimately aimed at securing the removal of all restrictions on economic activity, however small.

Democrats, however, fully supported the “back to work” campaign in the spring of last year, which fueled the massive fall and winter wave. The Biden administration is now spearheading the reopening of schools, which will become petri dishes for the spread of the virus among children, teachers and the population at large.

Internationally, the same policy has been implemented in virtually every country, whether under outright fascists like Bolsonaro in Brazil, or by nominally “left” or social democratic governments. While they may have tactical differences in how to proceed, rival sections of the ruling class share the same ultimate goal: protecting the wealth of the oligarchy.

The IYSSE calls on students and young people to fight for a virus eradication policy, which would result in the immediate halt of non-essential production and the closure of schools to stop the spread of the coronavirus and save lives, combined with emergency aid. to all who are affected.

Vaccination alone is not a strategy to stop the pandemic. Not only are millions of people still unvaccinated, including all children under the age of 12. Science shows that even vaccinated people can spread the virus, and there are alarming reports of “breakthrough” infections – sickness and even death of individuals. who have been vaccinated.

The global spread – with new cases at near record highs of 650,000 per day, with daily deaths of nearly 10,000 – means the virus is continually evolving into more infectious and vaccine-resistant variants, like the Delta variant.

Contrary to the claims of representatives of the ruling class, it is not necessary to “live with the virus”. Scientists explained that coordinated global action could and still can eliminate and eradicate the virus within months. Indeed, it is the only rational and scientific way to end the pandemic.

Turn to the working class and fight for socialism!

Developing a comprehensive and comprehensive campaign to eradicate the virus requires the intervention of the international working class, the revolutionary social force to which students must turn.

While the SARS-CoV-2 virus was born out of natural biological processes, the social catastrophe caused by its uncontrolled spread demonstrates the irrationality of a system based on private ownership of the means of production and the division of the world into nation-states. competitors. .

In the broadest sense, the pandemic is a symptom; the disease is capitalism, which subordinates all of society to profit and is organically incapable of implementing a rational response to the pandemic.

This is true of all the other crises facing humanity, including the growth of fascism, massive levels of inequality, the trend towards world war and climate change, itself a product of the subordination of the company in the interests of financial capital. The problems which concern the youth of today are therefore inseparable from the larger problems which the working class is confronted with.

The development of a genuine socialist movement in the working class requires a break with all existing political institutions of bourgeois society, including the Democratic Party and its appendages, “left” organizations such as the Democratic Socialists of America.

The experience of millions of young people who have supported Bernie Sanders – who wound up his campaign at the height of the crisis in 2020 and quickly lent his support to Biden – demonstrates that it is impossible to reform the Democratic Party, a party of Wall Street and the military.

The experience of the pandemic also demonstrates the reactionary character of the politics of racial and gender identity, which is strongly promoted on campus. The claim that the fundamental dividing line is race, gender or sexual orientation has been refuted by a pandemic that has devastated all working people, in the United States and around the world.

The unions are not instruments of the struggle of the working class either. Throughout the pandemic, unions have played a vital role in forcing workers back to work and suppressing independent opposition to the homicidal policies of the ruling class. Now teachers’ unions are leading the campaign, along with the Biden administration, to reopen schools, guaranteeing the infection and death of dozens of children and teachers.

The development of working class opposition requires building a network of grassroots organizations to mobilize the collective strength of workers across the world. To this end, the International Committee of the Fourth International, the world Trotskyist movement, initiated the formation of the International Alliance of Workers of Grassroots Committees.

This is the fundamental problem facing students and young people when campuses reopen. The pandemic has exposed the irreconcilable conflict between the capitalist class and the working class, the vast majority of the population. A titanic struggle is both inevitable and necessary, but for the working class to prevail requires the construction of a revolutionary socialist leadership.

The IYSSE, the student and youth movement of the Socialist Equality Party, is fighting to strengthen this leadership among young people. It is the only viable path that exists for the progressive development of human society. We urge all young people, students and workers who agree with this perspective to draw the necessary conclusions and join IYSSE.

Join the IYSSE and start the fight for socialism!

Join the fight to defend public education! No dangerous return to schools!

Some of the best home improvement loans of 2021