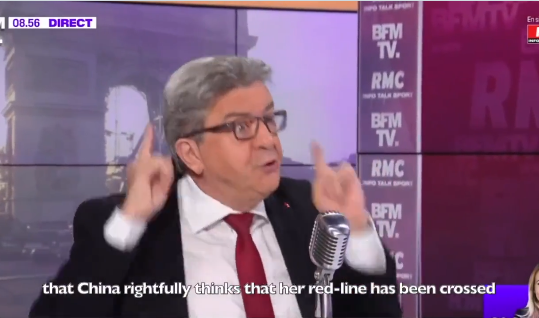 TAIPEI (Taiwan News) – A French presidential candidate said on Tuesday (October 19) that he did not believe Taiwan was a country, that a declaration of independence would be a red line for China and that he would do anything to avoid a cold or hot war with China.

In his program “Bourdin Direct” on RMC, the French journalist Jean-Jacques Bourdin held Tuesday a maintenance with Jean-Luc Melenchon, Member of the National Assembly, President of the Socialist Democratic Party La France Insoumise and candidate for the French presidential election of 2022. At the end of the 26-minute interview, Bourdin asked tough questions about Taiwan to the future president.

Amid the recent incursion of 149 Chinese fighter jets into the Taiwan Strait, Bourdin asked Melenchon if he believed Taiwan to be a “state.” Melenchon replied with a “No!” final.

The presidential candidate said his justification for denying Taiwan’s status as a country is that it is not recognized by the United Nations. Next, Bourdin asked Melenchon what he would do as president if China invaded Taiwan.

Melenchon responded by saying, “China will not invade Taiwan. Bourdin cut it off and replied, saying, “It was Mao’s dream. This is the dream of the Chinese president.

The candidate then stressed: “I do not want to put my finger on a cold war with China.” He argued that as President of France, “we cannot afford to do otherwise, and there is no point in doing otherwise”.

He vowed that France would not wage war on China, as “we have done before against many countries for nothing. Not with me ! Melenchon stressed the need for dialogue with China and reiterated that “they don’t want to invade Taiwan”.

However, he warned that if Taiwan declared independence, it would be possible that China “rightly thinks its red line has been crossed.” He stressed that the objective must be to avoid such a scenario.

“No war, enough war, we are a small country of 67 million people,” said Melenchon. He warned that “a strike and there is no more France. China is 1.5 billion, we must realize”.

He concluded by saying, “We shouldn’t be the world’s police.

French politician @JLMelenchon about Taiwan:
“Taiwan is not a country, it is not recognized by the United Nations”
“I don’t want to get involved in a cold war with China”
“If Taiwan officially declares its independence, China may rightly think that a red line has been crossed” pic.twitter.com/IFiKfjPyAa

In pictures: the news today