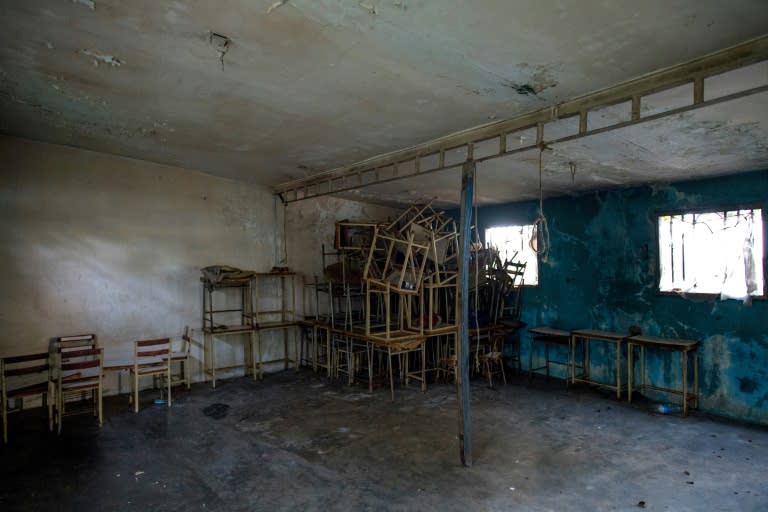 The desks of the only school in the impoverished Venezuelan fishing village of Ologa are stacked on top of each other in a dark, dusty room.

It has been four years since the classroom doors last opened in this isolated school on the shores of Lake Maracaibo in the country’s western Zulia state, and now the paint is peeling from the walls. walls.

And while the government has announced the reopening of schools closed for a year due to the coronavirus pandemic, Ologa’s will remain closed.

“Out of my eight (adult) children, only one can read and write, we are all ignorant,” fisherman Angel Villasmil, 58, told AFP before throwing his net into the water.

According to UNESCO, Venezuela’s literacy rate is over 97 percent, but Ologa, home to 40 families, suffers from isolation.

And in oil-rich Zulia, fuel shortages have led to the collapse of utilities and the growing decline of villages like Ologa.

“The kids don’t go to school because they closed,” Villasmil said as he laid down his catch as some of his 20 grandchildren played with oil-covered plastic debris on the shore Lake.

Although the school was opened during his youth, Villasmil never studied. Now he goes out on his fishing boat every day in hopes of catching something to sell or feeding his family.

Many teachers hitchhiked to work on fishing or tourist boats, but fuel shortages made this impossible.

The last remaining teacher “stopped going because of the fuel problem,” another local teacher said on condition of anonymity.

Before that, teachers had to make do with salaries of less than $ 5 per month.

12-year-old Andrea remembers a time when she attended school on the crescent-shaped islet covered in mangroves and the sounds of wild animals, such as tigrillos – little jungle cats – were constant.

What he misses the most is playing with his classmates. They played on a swing that they made out of rope and wood and hung between fruit trees.

“The teacher taught me a lot of things, to write, to read,” says the 21-year-old mother.

“I want my daughter to learn too. There are a lot of children here who want to study and cannot do it because there is no school,” she added, referring to his three-year-old daughter, Sheira.

In Ologa, a village where aging houses are built on stilts, the closing of the school is far from being its main problem.

“We have no electricity, we drink water when it rains, for the rest we have to take water from the river”, explains Francisco Romero, 67 years old.

This water is very polluted and often covered with a layer of oil which escapes from the centers of extraction in the northeast of the lake.

“Life has been difficult recently” for Romero and the nine members of his family living in a small house above the water.

The house is filled with the smoke of wood burnt for cooking because of the lack of gas.

“Our lungs are hurting … we have failures on all sides. Fuel, electricity, water.”

The only fuel they see is sometimes when traders come in and try to exchange it for fish, rice, or cornmeal.

Many residents have left the area so that they can “put their children to school”, but the national crisis has forced them to return, Romero said.

Citizens of both countries should be informed of bilateral decisions …