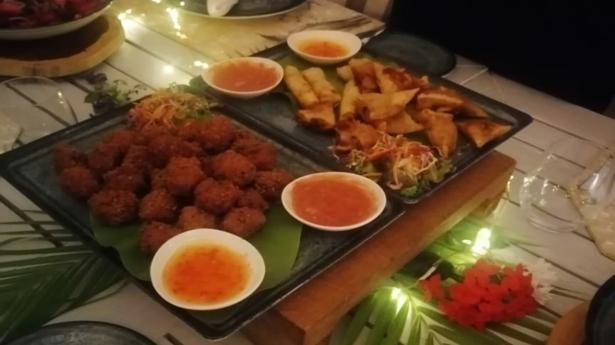 From Madagascar-spiced garam masala to donuts stuffed with prawns and bechamel sauce, local dishes in Mauritius are familiar and yet so exotic.

From Madagascar-spiced garam masala to donuts stuffed with prawns and bechamel sauce, local dishes in Mauritius are familiar and yet so exotic.

It is a glorious autumn night in April in Mauritius when a small bus with disco lights and local Sega music drops us off at a village named after chilli pepper (chilli, in Mauritian Creole). We are with Ved Bhujun, whose ancestors left India nearly 200 years ago for this blue-green land.

The Bhujun family has retained its Indian heritage, despite a very mixed Creole gene pool now. A temple guards the garden of the house, we are greeted with lighted lamps, and Ved’s son – with the Indian Navy until a few years ago, and now in the Anti-Narcotics Squad in Mauritius – tells me how when he gets married he will not only have Indian-style music and dancing, but also a ‘turmeric ceremony’. There is nothing religious about these rituals; they are just vehicles for memories. Just like food. You realize by tasting it, here is something that is Indian, but not Indian – spices without spiciness, cultural resonances transformed into new flavors.

Ved Bhujun’s son with the writer


In Mauritius, the legacy of Indian ancestors who arrived on ships as indentured laborers to work in European-owned farms and sugar cane factories in the mid-19th century lives on, is revered.

With the abolition of slavery after the French Revolution and Britain prevailing over its then rival maritime colonial power France, labor began to be contracted from all over India in 1834, and 41,000 Bengali ‘coolies’ landed on this Indian Ocean island. Others came in the following years – from Bihar and Andhra, the central provinces and the south-west coast; Poor Indians seeking better wages, across ocean and continent, their lost homeland.

As they settled, they mixed with other immigrants, those from Africa, China, Malays, as well as Creoles born on the island. As the races mixed, Bhojpuri and Telugu seeped into Mauritian Creole, and these are the words we hear everywhere: chatni and Baija (from bhajiya) being only two generously served tonight, as Ved cooks for us in his home.

A plate of bajas

The snacks are what he calls “half moons”, shaped much like the Goan laughstuffed with prawns and bechamel sauce, as well as “chili bites”, a descendant of moong dal pakori (doughnuts) from Old Delhi or Madhya Pradesh, garnished with green chillies. These are part of the great Baija island repertoire, fried all over, with everything from potatoes and white onions to lettuce.

Ved’s sumptuous home-cooked meal moves on to mains and as a nephew belos (Rollers) paratasthere are several curries to try – chicken, fish but also chayote (a thin-skinned squash similar to pumpkin), all fragrant and full of spice, but not overly pungent with the black pepper or Indian red chillies .

It is a sumptuous display set in an open veranda that functions as both a kitchen and a dining room, and blends into a beautiful garden. Preceded by many steel glasses of rum punch (made from the family’s vanilla rum brew; every family in Mauritius seems to have their own “homemade” special), it is followed by a party frantic club Bhojpuri-meets-Bollywood music.

Mauritius is the world’s hotspot for deep-sea fishing, and anglers come here in the summer (January) for a prestigious blue marlin fishing competition organized by Le Morne Fishermen’s Club. Dubbed the Southern Indian Ocean Billfish Competition, it’s a busy and festive time on the island.

What is truly authentic?


After the pandemic, as travelers around the world seek the otentik (authentic), as we say in Creole, local experiences like this increasingly offer people an immersion in a syncretic culture that is uniquely Mauritian.

I booked Ved’s family dinner through my hotel Ravenala Attitude, which is part of a large chain of 100% Mauritian hotels (all Mauritian, they only employ local staff), where to dine with the family of staff members is a legitimate experience. Ved works with the hotel and dinners like this – which you can book through the hotels or independently – cost around 700 Mauritian rupees per person (around ₹1,225), plus transport.

There are similar local dining experiences all over the island, with home cooks, and even former hoteliers or chefs now hosting small, personalized experiences to showcase their unique blend of culture. Indians are enthusiastically welcomed everywhere thanks to older links, and everywhere we go we land up chatting about masala or garam masala (made here with spices from Madagascar) and how it’s “like India, but not exactly”. In fact, even in the French Juice and brown sauces in dishes like grilled chicken are sometimes fortified with garam Masala. I ate pizza with tamarind chutney reminiscent of Indian discuss in a popular establishment too! Apparently, this combination is perfectly acceptable on an island where all definitions of “the original” are rightly abandoned, such is the diversity and makeup of the culture.


Small eateries like Karay Mario, set up by the eponymous Mario, a retired hotelier in his 60s, in a former apothecary that once treated sugar mill workers, also give you a full peek at the heritage. Indian from Mauritius.

Karay, a play karahi or wok, serves a range of fries gazaks (the generic Arabic word for snacks is also the Mauritian word, pointing to global trade links) which also includes sambuse and dhol puri (lens pure), separated from Baija and curries.

Franco-Mauritian families have also integrated some of these flavors into their own culinary culture, with slight twists. Chilli bites become like this pepper cakes, literally chilli cakes, although French families, who still own many large estates producing sugar cane, vanilla and other fruits, barely use chilli. The culinary interchange between European and Asian cooking styles also means that specialties such as cold breakfast sea urchin or octopus as well as smoked blue marlin and other seafood also take on more imaginative forms. Chez Mario has a fabulous octopus and breadfruit curry.

Ved with his fish biryani

At Ved, however, we find the most unique fish biryani. He takes salt fish which reminds me of Macau baccalaureate (salted cod; although it is the sun), boil it, then fry it with onions, garlic and tomatoes, mix it with rice and garam masala to give us biryani-meets-fried rice.

Basically, it’s Mauritius. More than the sum of its many parts. A unique microcosm of the world, connected by trade, history and politics. A convergence of races and tastes.