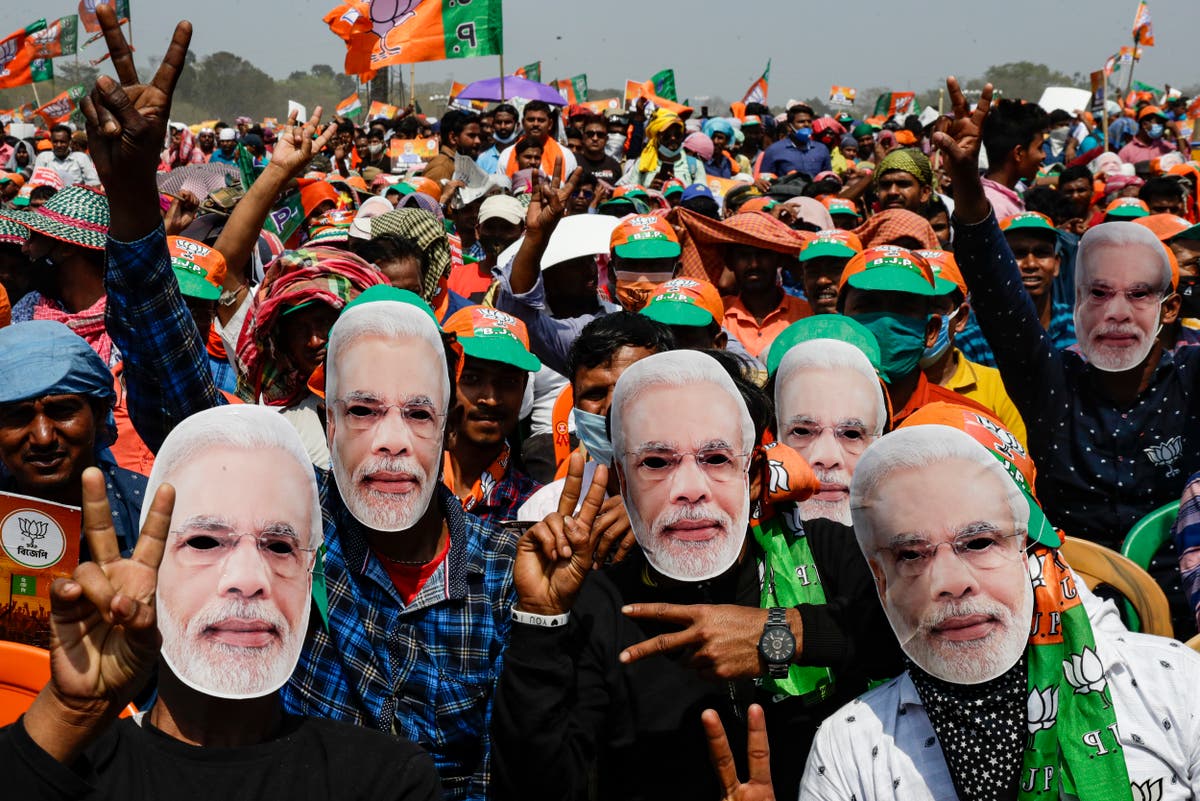 Five Indian states are set to go to the polls in the coming weeks in a closely watched election battle that will be crucial in gauging the popularity of Narendra Modi’s Hindu nationalist Bharatiya Janata Party (BJP) ahead of general elections in the country in 2024.

The polls will also test whether opposition parties, greatly reduced in number in the last election with the rise of Mr Modi, can form a united front to challenge him before 2024.

More than 180 million voters – more than double the population of the UK – will be able to vote in the upcoming elections in five states, including the most populous of Uttar Pradesh (UP), Uttarakhand, Goa, Manipur and Punjab rocked by protests.

The BJP is in power in four of these states while the Indian National Congress, which has held intermittent power in the country for decades since India’s independence before being ousted in 2014, is in power in Punjab.

The state of Uttar Pradesh with its 403 assembly seats, the highest in the country, will vote in seven phases. He will also be the first to go to the polls from February 10. The other phases will take place on February 14, 20, 23 and 27, and March 3 and 7.

Elections in Punjab, Uttarakhand and Goa will be held in a single phase with the first vote for its 117 seats on February 20 and the other two on February 14 for their respective 70 and 40 assembly seats.

The northeastern state of Manipur will vote in two phases for its 60 seats on February 22 and March 3. The results of all assembly ballots will be announced on March 10.

Why UP Assembly Elections 2022 are key for the BJP

While all of these states are electorally crucial to the BJP in its bid to tighten control over the country, UP is going to be particularly instrumental in ensuring Mr Modi’s party maintains its power and other parties increase their presence.

Currently, controversial and hardline BJP leader Yogi Adityanath, known for his far-right stance, is the chief minister of the state. Hindus make up 80% of the population of Uttar Pradesh while minorities, of which Muslims are a significant part, make up 19%.

UP has been the epicenter of BJP Hindutva politics for decades, centering on the contentious issue of the Ram temple in the city of Ayodhya, where a mosque was vandalized in 1992 by Hindu nationalist groups who believe it is t is the birthplace of Lord Ram. The party has advocated the establishment of the temple ever since and the country’s Supreme Court in 2019 ruled in favor of the new temple – a decision the ruling party claimed as its victory.

The importance of the UP to the BJP can also be noted by the fact that Mr Modi in 2019 decided to stand for election from the city of Varanasi instead of his usual territory in Gujarat where he served as chief minister. for more than a decade before becoming Prime Minister of the country.

However, this time all is not well for the BJP in UP as signs of a brewing rebellion within the party have increased in recent weeks. Ten lawmakers, including three ministers, have so far left the BJP in Uttar Pradesh. Most of them joined the main rival Samajwadi Party.

However, the BJP appears confident of beating the opposition citing the popularity of Mr. Adityanath and Mr. Modi in the state.

Punjab to vote after massive protest by farmers

Last year also marked the biggest protest against the BJP government to date in the form of a farmers’ unrest that led to Mr Modi clawing back three controversial laws.

The elections are also going to be an indicator of the political fallout from the unrest, particularly in Punjab, a state from which the largest number of protesters took part in demonstrations during the year.

As the ruling Congress fights to hold on to power in one of the few states it governs outright, Mr Modi and his party’s allies in the state will try to make inroads by taking advantage of the fluid political situation. in the state.

A few months before the elections, the then chief minister of the state and a prominent Sikh face, Captain Amarinder Singh, left Congress and formed a new party, the Punjab Lok Congress (PLC), which announced its alliance with the BJP.

The Congress will also face competition from Delhi’s ruling Aam Aadmi party, which is poised to make gains in Punjab.

Will the BJP keep Uttarakhand, Manipur and Goa?

While the BJP is in power in the three states with a six-party coalition government in Manipur, the party’s ally in the northeastern state, the National People’s Party (NPP), hints at the possibility to stand alone in the elections.

Some friction is also seen in Uttarakhand, with the BJP sacking a state cabinet minister on Sunday. Uttarakhand Minister Harak Singh Rawat, who held the portfolios of Forests and Environment, Labour, Employment and Skills Development, was removed from the state cabinet and his main membership in the BJP was revoked for six years.

Mr Rawat reportedly threatened to resign at a cabinet meeting earlier. It is now said that he will join Congress. However, there is no official confirmation of this yet.

Elections in Goa will come amid a spate of attacks on Christians in India, with advocacy groups saying such incidents have increased under the Modi government. Goa has a 25% Christian population and the state is a popular tourist destination.

The year is also crucial for Mr Modi as prime minister as the Omicron variant spreads, posing another danger to health services and economic activities. The election campaign this time around has also been unlike any other election, with the country’s election commission banning road shows and rallies, asking that all events be held virtually.

The counting of the votes will take place on March 10, deciding the fate of thousands of candidates, from five states and the main parties.