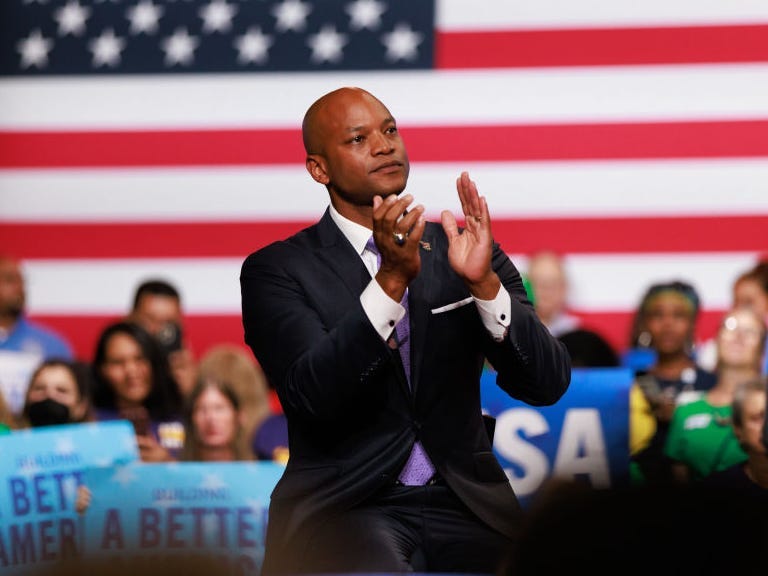 FREDERICK, Maryland – In the banquet hall of Asbury United Methodist Church, one of the oldest black churches in the historic city about an hour’s drive west of Baltimore, the Democratic candidate for Gov. Wes Moore last week began his message to party loyalists by emphasizing service.

Moore – who served as a captain and paratrooper in the US Army’s 82nd Airborne Division and was deployed to Afghanistan from 2005 to 2006 – told attendees it was imperative that all Marylanders benefit from the progress of the state, a driving principle of his campaign.

“They taught us something on our first day of military training, whether you’re army, navy, air force, marines, coast guard… It was simple . Don’t leave anyone behind, ever,” Moore told the crowd. “If you get one of my men, I’ll send a battalion to pick them up if necessary. We’re not leaving anyone behind.”

As Moore spoke alongside his running mate lieutenant governor, former state Del. Aruna Miller, he linked this theme to tackling child poverty and reducing disparities in health care, reaffirming that their potential administration would be shaped by tackling some of the most persistent issues affecting citizens of the world. ‘State.

In much of the country, Democratic candidates campaigned against the Supreme Court’s decision to to spill Roe v. Wade, while touting the impact of President Joe Biden’s bipartisan bill on infrastructure in their respective states and emphasizing the need to ensure free and fair elections in the United States.

But Moore has crafted a deeply personal campaign pitch, with the first political candidate speaking forcefully about patriotism in a way that can appeal to voters across the ideological spectrum while refusing to cede ground to the GOP on the issue — especially in the wake of the January 6, 2021 riot at the United States Capitol.

As we rode the country bus from Frederick County, a new swing in Hagerstown, a Republican-leaning town in western Maryland, Moore noticed a property displaying both an American flag and a flag touting the “Make America Great Again” movement personified by former President Donald Trump.

“Here you have a guy with an American flag and a Trump flag, and for so many people in our society, they think those two things are synonymous with each other. Right?” Moore, 44, told Insider. “That’s what we’re against. The idea that we’ve kind of allowed this MAGA movement to control this idea of ​​patriotism and try to define what it means to be a patriot and what it means to defend his country.”

“And I’m like, and I’m sorry, you mean the people who tried to destroy it?” He continued. “Is it the patriots? Those who claim to be the defenders of freedom?

During the general election campaign, Moore – a Valley Forge military college and Johns Hopkins-educated Rhodes Scholar who wrote best-selling book of 2010 “The Other Wes Moore” – linked his commitment to service with policies he believed would improve the lives of Marylanders.

Moore’s opponent, GOP State Del. Dan Cox, is a Trump-backed conservative who represents parts of Frederick County and chartered three buses to Washington, DC, to attend the “Stop the Steal” rally on Jan. 6; he tweeted that day, then-Vice President Mike Pence was a “traitor.” Cox later spoke out about the violence that occurred at the Capitol and said he did not walk to the building, and also apologized for his comment about Pence.

Both men are running to succeed two-term Governor Larry Hogan, an anti-Trump Republican who won in 2014 and 2018 by positioning himself as a consensus builder who could provide political balance in the staunchly Democratic state. Hogan, who is considering a possible presidential campaign in 2024, said decreases to endorse Cox’s candidacy for governor.

Moore, who would be Maryland’s first black governor if elected next month, says it’s critical the next leader makes it clear that no political party or movement has a monopoly on service to the country.

“We’re going to have to deal with some very real generational challenges — economic, educational, housing,” he told Insider. “But I also believe that one of the prerequisites for the next chief executive is that we have to step up and end this idea that a fringe group has claimed and seized on a country’s mantra of patriotism.”

“I refuse to let anyone try to fight this,” Moore continued, “or claim that they have a higher stake or a higher claim than me or my family or the people I served with or the members of my community.”

“We must repair this rupture of division”

After winner a competitive multi-candidate Democratic primary featuring Maryland Comptroller Peter Franchot and former Labor Secretary Tom Perez, Moore honed his message of patriotism, proposing a year of service that could provide essential job training and career opportunities. mentorship to Maryland high school graduates. He envisioned the year of service option as something that could potentially be funded in partnership with federal, state and local government entities.

Moore, the former chief executive of the Robin Hood Foundation, a poverty relief nonprofit, said “those who serve together will usually stay together”, alluding to the deep divisions that define many aspects of the modern American culture.

“I believe part of the job of government is to find what works, make sure it’s supported, and then build on it,” he said. “We have to fix this brokenness of division and this vitriol that we have in our society. Why not really address these two things at the same time?”

“Give them the opportunity to be a part of something bigger than themselves. And the reason I know it worked is that’s exactly what I saw in the movie. ‘army,” Moore added. “We all had very different backgrounds. But when you gave us a collective connection, it’s amazing how it changed the perception and often many of the biases that we had coming into the situation.”

For Moore, traveling to western Maryland reflects how he would need to govern if elected, listening to people in places where Democratic candidates don’t always fare well.

During the ride, Moore pored over a state-level child tax credit program he hopes to implement that will be similar to the one that lapsed at the federal level last December; it’s a policy proposal that could potentially attract some Republican support.

And in the last Washington Post-University of Maryland investigationMoore held a 60% to 28% lead among registered voters, to attract the support of 86% of Democrats and 22% of Republicans – a reversal from 2018 when it was Hogan who garnered considerable cross support.

Mileah Kromer, associate professor of political science and director of the Sarah T. Hughes Center for Politics at Goucher College, told Insider that Moore’s conversations about patriotism and service have been “incredibly effective messaging for him.”

“If you look back to 2018, Hogan was so successful because he was able to attract a wide spectrum of voters that included full support from his base, but also a ton of Democrats and strong support from independents. “, she said. “Wes Moore’s campaign is in many ways so different from that of the last Democratic nominee, who really focused on the progressive wing of the party. And he spoke about patriotism and his military service in a way that helped him get the attention of independents, older voters and more conservative Democrats who may have voted for Hogan in the past two cycles.”

“Politically, it also isolated Wes Moore against Dan Cox trying to say he’s some kind of far-left socialist. None of those attacks stuck in any meaningful way because that’s not It’s not who he is,” Kromer added.

Moore pointed out that, if elected, he would put together a state-like government.

“I want everyone in Maryland to be able to look at the administration that we’re going to build, cabinet secretaries, agency heads and everything to look up and say, ‘I see myself around the table,'” he said. he declared. . “I want to say that.”