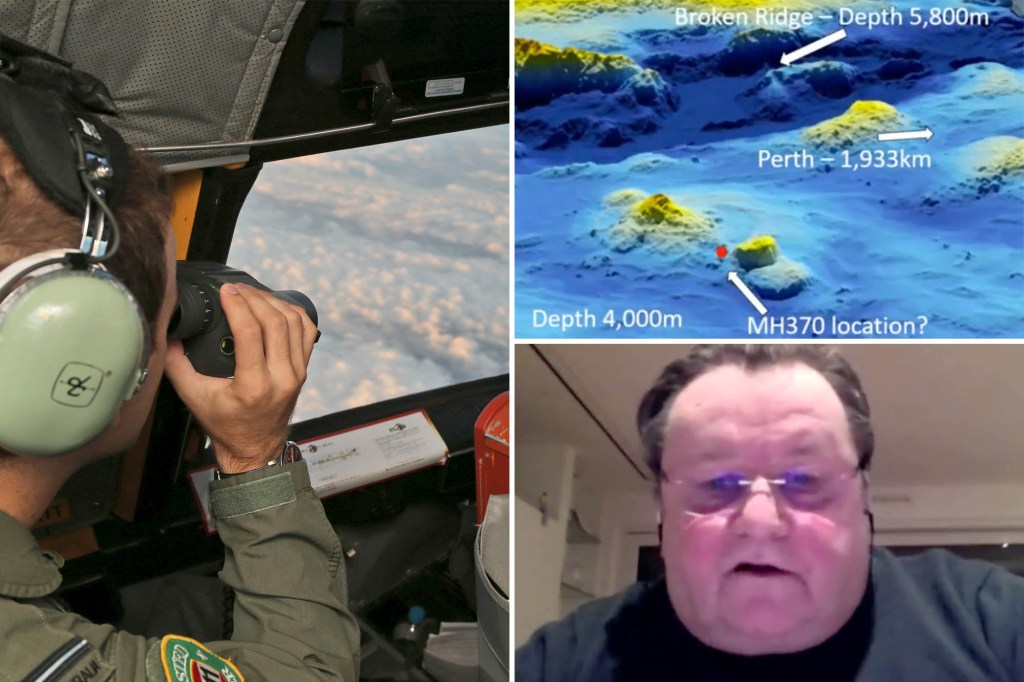 A British engineer says he is “very confident” to have found the exact spot where the MH370 crashed.

The Malaysian Airlines plane disappeared in 2014 with 239 on board en route to Beijing from Kuala Lumpur.

Richard Godfrey has been a new tracking technology with the goal of solving one of the biggest aviation mysteries in history.

He says the system using radio signals acting as “trigger wires” helped him locate the jet, which he says is 13,000 feet below the ocean’s surface.

Godfrey says the plane is about 1,200 miles west of Perth, Australia, at the foot of what’s known as the Broken Ridge – an undersea plateau with a volcano and ravines to the south. -est of the Indian Ocean.

He sensationally told 7News from Australia that he believed the crash happened after a “hijacking” which was an “act of terrorism” by pilot Captain Zaharie Ahmad Shah.

The Briton claims that the pilot “decided to hijack his plane and make it disappear in one of the most remote places in the world”.

The engineer said the new tracking system called Weak Signal Propagation Reporter (WSPR) was like having a “bunch of tripwires running in all directions from the horizon to the other side of the globe.”

Godfrey combined the new technology with data from the aircraft’s satellite communication system.

He said: “Together, the two systems can be used to detect, identify and locate the MH370 during its flight path in the southern Indian Ocean.”

The Briton said he was “very confident” to have found the missing plane which, according to him, crashed at 8:19 am.

“We have a lot of satellite data, we have oceanography, drift analysis, we have Boeing performance data, and now this new technology,” he added.

“All four align with a particular point in the Indian Ocean.”

The Broken Ridge location was not in the original 2015 search zone and was missed by just 28 miles by Ocean Infinity in 2018, according to reports.

However, according to 7News, the area was part of the 2016 research.

Last month, Godfrey discussed claims that pilot Shah simulated a flight at his home where he flew a plane in the Indian Ocean “until the fuel ran out.”

“Zaharie Shah simulated a single flight from Kuala Lumpur via the Strait of Malacca until fuel ran out in the southern Indian Ocean.”

Since 2014, 33 pieces of debris have been found in six countries – including South Africa and Madagascar – which experts say proves the plane plunged into the Indian Ocean.

The latest large-scale search for the MH370 in 2018 by US robotics company Ocean Infinity – using unmanned underwater vehicles – covered nearly 50,000 square miles, but nothing was recovered.

Weak Signal Propagation Reporter (WSPR) is now used to accurately calculate the final location of the MH370 before it vanished.

WSPR is a globe-spanning radio signal grid that tracks planes when they trigger invisible “digital traps” that reveal their position.

Extensive testing of the new technology for tracking historical data from radio signals hitting airplanes has led experts to believe it could focus on a more specific search area.

Godfrey compares the technology – implemented in 2009 – to a network of invisible sensors that record movement among clouds.

He told The Times: “Imagine crossing a meadow with invisible tripwires running across the entire area and back and forth sideways and backwards. “

“With every step you take, you are walking over particular tripwires and we can locate you at the intersection of the disturbed tripwires. We can follow your path as you move through the prairie.

After news of the success of the WSPR trials, the team at Ocean Infinity revealed that they were ready to resume another search.

“We are always interested in resuming research, whether as a result of new information or new technology,” a spokesperson said.

The MH370 disappeared from radar after taking off from Kuala Lumpur International Airport and made an unexplained U-turn from its intended flight path.

This article originally appeared on The Sun and has been reprinted here with permission,