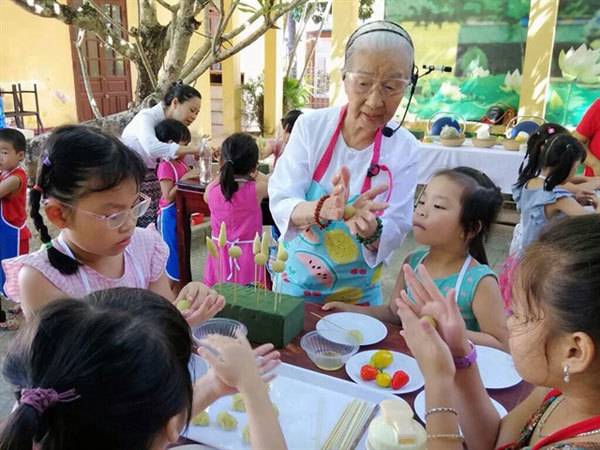 Mai Thi Tra, Hue’s famous cook, has been following a strict vegetarian diet since the historic floods that killed hundreds in the city in 1999.

Before that, she was known for her skill in preparing traditional Hue cuisine. Born into a noble family where her aunt, Mai Thi Vang, was the wife of King Duy Tan and her father the best mandarin in the district, Tra was exposed to cooking from an early age.

“I learned the cooking from my mother and other women in the family,” said the master chef, adding that the family often got together on special occasions such as Tet (Lunar New Year) and prepared a storm.

She now knows the secrets of preparing many herbal dishes from her help with cooking in the pagodas, studying for many decades and of course what she learned from her family.

According to Tra, vegetarian cuisine is an important part of Hue’s gastronomy. The former imperial capital has around 200 plant-based dishes and was one of the first places in Vietnam where vegetarianism began.

The royal style was born from a tradition of the king in the past, which began in 1807. Every three years, the king held an offering ritual called Nam Giao Esplanade for which he became a vegan and slept at the fasting palace before. the beginning of the ritual.

The cooks worked hard to create healthy vegetarian dishes for the king. Royal plant-based meals were sophisticated and carefully prepared using vegetables, fruits, pulses and mushrooms imported from China, all cooked in different ways, from compote to grilling.

In contrast, the monastic style that began in Buddhist pagodas was much more rustic. The monks prepared their meals from simple local ingredients such as squash, legumes, peanuts, sesame and soy sauce. They did not apply sophisticated cooking techniques and did not use seasoning due to its rarity. This way of cooking was popular because it was affordable and easy to follow. Buddhist followers often follow a vegetarian diet on the first and 15th day of a lunar month, which is still practiced today. Some have gone completely vegan or vegetarian like Tra.

In the 20th century, some of the royals became nuns and introduced the sophistication of vegetarian court cuisine to a wider community.

The two styles have since blended together, creating a variety of Hue vegetarian dishes.

â€œHue’s vegetarian cuisine is all about celebrating the freshness and goodness of plants,â€ Tra said.

Favoring the natural flavor of plants in the kitchen, she uses fresh and seasonal ingredients. The ingredients are simple yet rich in nutrients, ranging from beans and tofu to greens and nuts. While tofu and legumes provide protein, grains – carbohydrates and nuts – fats, green vegetables, and fruits are a great source of essential vitamins and minerals.

The master chef said the healthiest way to cook plant-based dishes is to eat them raw to preserve the quality and nutrients of the ingredients.

However, no matter how the dishes are cooked, seasoning is crucial.

According to Tra, people often forget how sweet vegetables are and use too many artificial additives. She replaces these sweeteners with natural spices and adds a few small cubes of rock sugar to minimize the salty taste and bring a balanced taste to her dishes.

She mentioned that chefs shouldn’t peel ingredients that are too thick, especially root vegetables, as most of their nutrients are under the skin.

Vegetable broth is the basis of Tra’s cooking and is used in various dishes such as porridge and soup. She simmers different kinds of plants like carrots, pumpkins, sweet potatoes and jicama to create layers of flavor for the broth.

One of his famous recipes is a mixed soup made with fresh mushrooms, green beans, lotus seeds, potatoes, carrots, tofu skin and vegetable broth. The vegetables are crushed with care, while the lotus seeds are boiled separately and evenly distributed among different bowls. After seasoning, the end product is edible art with a pleasant scent of beans, a nutty taste of lotus seeds and a mild flavor of mushrooms.

It was the dish that chef Tra prepared during the welcome party of the diplomatic corps during the Hue Cultural Week in Hanoi in 2000. His strong impression on the diners allowed him to travel to Belgium to present the cuisine. Vietnamese vegetarian in the world.

Cooking with the heart

Cooking vegetarian dishes requires a lot of effort and thoroughness on the part of chefs. Therefore, dedication is a prerequisite because this work is â€œan act of loveâ€ in the words of Tra.

Following this philosophy, Tra diligently practiced and created various vegetarian recipes, ranging from soups and noodle dishes to cakes. With experience and creativity, she has been able to delicately transform savory dishes into plant-based dishes by substituting meat-based ingredients with vegetarian ingredients, thus creating tasty and elegantly served dishes.

At 85 years old, chef Tra still enthusiastically presents and teaches how to cook vegetarian dishes to food lovers at different events and competitions.

She has worked on writing books on traditional vegetarian dishes and Hue cakes to spread the local culinary art and promote the love of cooking to more people.

Ngu Vien Heritage offers the vegetarian side of the menu

So the news on climate change does not look good. The world is getting warmer every year.

Hue is hosting a vegetarian food festival this weekend

The former royal capital of Hue holds a vegetarian food festival to promote the best cuisine in the region.