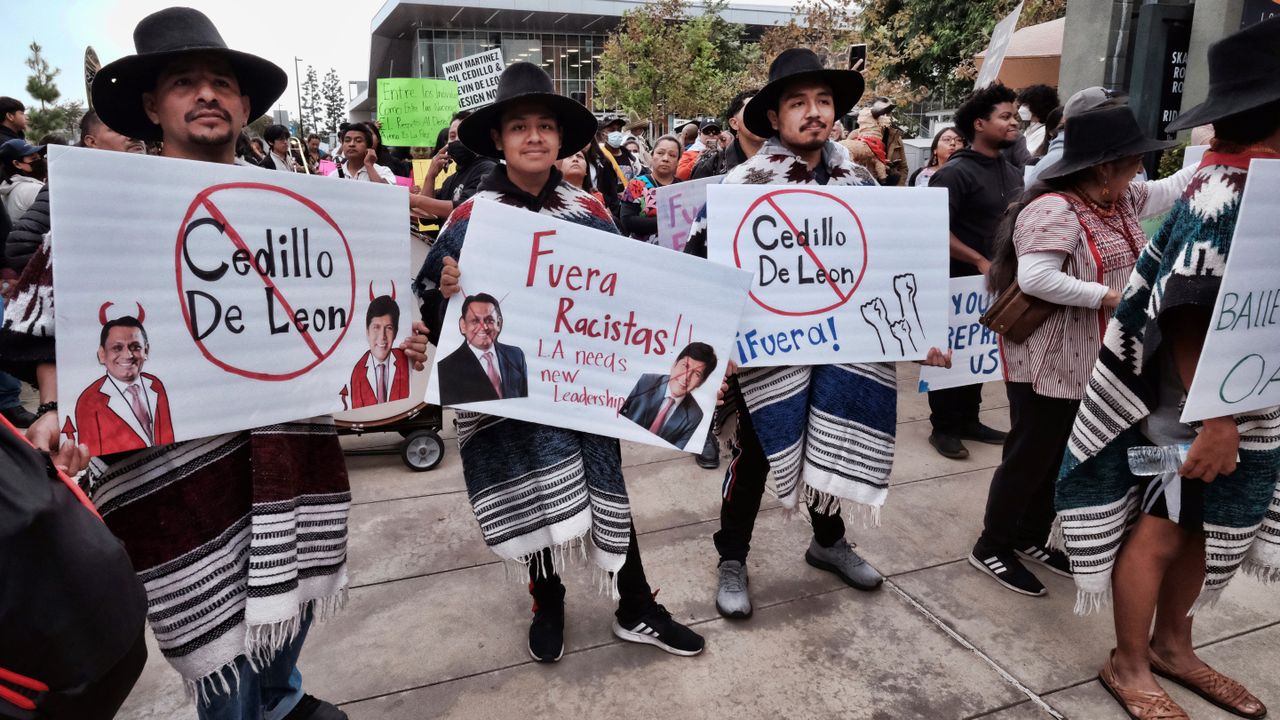 A Los Angeles City Council meeting scheduled for Friday was canceled due to protests calling for the resignation of City Council members Kevin de León and Gil Cedillo, two prominent Democratic Party officials who made racist comments during a redistricting meeting last fall.

Former City Council Speaker Nury Martinez and AFL-CIO County Leader Ron Herrera were also implicated, leading to their swift resignation from their posts after calls for the resignation were made by Biden’s White House and other top Democratic Party officials. In audio recordings released last week, Martinez is heard denouncing Oaxacans, Armenians, Jews and whites. She attacked rival politicians for being “for black people” and called the African-American child of another city council member a “little monkey” who should be beaten.

Several hundred protesters, many of them of Oaxacan descent, demonstrated in downtown Los Angeles on Friday carrying signs saying things like “Fuera Racistas!” (Racists out!) and denounce the racism of council members against all different ethnicities.

These protests have prompted the crisis-ridden Los Angeles City Council to hold virtual meetings instead of in-person meetings on the false premise of COVID-19 precautions, citing a recent revelation of a positive COVID-19 case. at last Tuesday’s meeting.

“The virtual meeting is due to the diagnosis of COVID-19, and that’s it. We know Angelenos still feel pain and anger, and they have every right to weigh in and express those feelings,” Dan Halden, spokesman for the Los Angeles City Council Speaker, said in a statement. email Friday evening. “We will take public comments so that people have ample opportunity to make their voices heard.” At the last in-person meeting, protesters who publicly commented on the meeting took the opportunity to condemn the council, and riot police were called in to quell them.

Using COVID as an excuse is utterly hypocritical, as Los Angeles’ anti-science approach to the COVID-19 pandemic has resulted in over 96,000 unnecessary deaths in Los Angeles, hundreds of thousands of hospitalizations, problems term health issues due to Long COVID and the complete collapse of the health care system.

Michelle, an LAUSD teacher, wrote to the WSWS about her experience running for local public office in Los Angeles, which highlights this event:

“Many years ago I aspired to run for office. You could pay a few thousand dollars to be put on the ballot or collect signatures. I made myself ill collecting signatures and when that was said and done it was not possible to verify enough to get me on the ballot. I also met a former city councilor who had represented our district for many years. He told me that minorities in power are hand-picked in their youth by behind-the-scenes businessmen. They pay tuition at private high schools and then send them to prestigious colleges. He told me that Jose Huizar (another former LA councilman later indicted for corruption) had his support and would be elected. I shouldn’t waste my time. He was right, but Huizar got caught taking money from the developers and was charged with federal crimes. They just replaced it with [other] Hispanics hand-picked by secret society businessmen. The council person I spoke to died in 2012, so there’s no real way to prove any of this. I just know that I plan to avoid any future political involvement in the future.

Since the first leaks on Reddit earlier this month, more audio recordings have emerged involving Herrera and Hannah Cho, an aide who has previously worked with other advisers, including Mitch O’Farrell (now acting council chairman since Martinez’s resignation), Herb Wesson and Holly Mitchell (now LA County President) and who now works with Herrera at the LA County Federation of Labor. In these recordings, they discuss how to help O’Farrell, an ally of Herrera, against a political opponent of the Democratic Socialists of America, Hugo Soto-Martinez, for Council District 13.

As with previously published comments that came mostly from Nury Martinez, the new ones reveal a similar mix of secret intrigue and political cynicism. And while Martinez’s audio was mostly about the recut, this cycle focuses on Herrera and Cho’s efforts to undermine Soto-Martinez.

While there isn’t as much overt racism as in the previous recording, it’s by no means absent. Cho starts with “Well, that’s it for my first meeting from home from work, other than…” Then, in a muffled whisper, what sounds like either “That’s a lot of white people” or “This is a lot of blacks”. people.” The audio is somewhat muffled, and it’s unclear which ethnicity she felt compelled to say there were “many.”

The recordings continue their plans to beat Soto-Martinez by buying endorsements from various Democratic Party groups. In Cho’s words, we have to “buy out some of these bigger clubs, we just need to buy them back. And we just gotta take them back… Like LACYD, like the Young Dems, that’s the one we gotta buy. The LGBT one? [Referring to the Stonewall Democratic Club] We have to redeem them. »

To dissuade Soto-Martinez from running, Herrera obviously offered him a deal: “Here’s the deal I negotiated, isn’t it? Go work for Mitch [O’Farrell]. Learn the neighborhood. Learn the trade. And it’s yours in four years.

But perhaps the most telling commentary is one that sums up the Democratic Party’s attitude toward the DSAs. As Herrera says: “He [Hugo Soto-Martinez] should only have support from me personally, from you and from the federation. Maybe not in that order, I don’t know… But when that whore forgets he’s unionized and goes, you know, progressive DSA, I don’t have a problem. I don’t care if he’s DSA, really not. Because I think a hybrid wins now for us, that includes work. It’s him. He is inside. But… He forgot his roots.

This is how the Democratic Party views DSAs. The DSA is allowed to exist, is even encouraged, by Democratic Party and labor stalwarts precisely because this “hybrid” approach “wins” for them. They are “in”, as long as they don’t forget who they work for. This is the party that the DSA want to reform.

With a rise in militant strikes across the United States, the Democratic Party and its pseudo-left appendages have been working around the clock to limit the damage, with politicians – from local officials to Joe Biden – calling on council members municipal involved to resign. and be replaced by other trusted upper-middle-class members with similar pedigrees.

The turn to racial politics has been used over the past four decades to cover up the deeply reactionary and anti-working class work of the Democratic Party. The pseudo-left, including the DSA, has been invaluable in promoting the lie that the “representation” of disenfranchised minorities – whether on the basis of race, gender, religion or sexual orientation – would alleviate the corruption and inequality that has been rampant in America.

For all their platitudes, the Los Angeles City Hall scandal demonstrated the true political and class character of the Democratic Party: a deeply reactionary, right-wing organization whose preferred methods are those of political subterfuge, whose language is that of the extreme right racist, and whose gait is that of the gangster.

Review of the WSWS

What is the pseudo-left?

This review examines the response of pseudo-left political tendencies internationally to major global political events of the past decade.

Subscriber loans: More to consider than you think