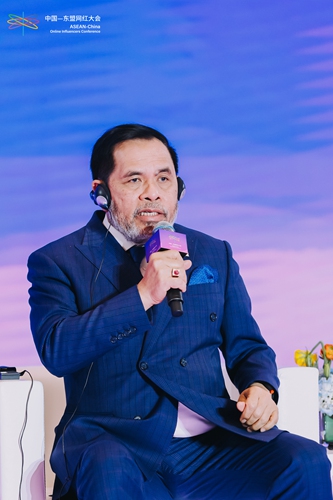 Cake from Vietnam, coconut from Malaysia, sandwich crackers from the Philippines… a number of livestreamers, mostly foreign students in China, promoted products from ASEAN countries to consumers in front of small screens at the ASEAN-China Online Influencers Conference in Fuzhou, Fujian Province (East China).

With the theme “Set sail from the Blessed Land when the wind is positive”, the first ASEAN-China Online Influencer Conference and Fujian Brand Promotion Tour along the Maritime Silk Road was held from Tuesday to Thursday, a year after China and ASEAN celebrated the 30th anniversary of the establishment of dialogue and elevated their ties to a comprehensive strategic partnership. The event also followed the implementation of the Regional Comprehensive Economic Partnership (RCEP), the world’s largest free trade agreement, which will bring new development opportunities to China-ASEAN relations.

ASEAN diplomats in China and Chinese and ASEAN online influencers learned about Fuzhou’s experience in developing the digital industry and learned about the culture of Fujian province through visits to the field and online activities during the three-day event.

Benjamin Sukanjanajtee, Minister at the Thai Embassy in China, told the Global Times that his life has been profoundly changed by the rise of China’s online economy after being relocated to the country a year ago.

Sukanjanajtee said he was impressed with what students from ASEAN countries were doing through live streaming, such as selling products made in their own countries at the Sea Lion Intelligence Center in Fuzhou.

“It’s a new trend and a new normal for this generation,” he said.

“It’s not the traditional way of selling and buying things. You don’t need to go through a middleman but sell directly to customers. This changing trend is also happening in Thailand,” Sukanjanajtee remarked. .

Djauhari Oratmangun, Indonesia’s Ambassador to China, pointed to famous Indonesian shrimp cracker brand Papatonk, which sold more than $2.5 million worth of shrimp crackers in less than six minutes with the support of Chinese influencer Li Jiaqi on Taobao, saying, “Can you imagine the potential of Chinese influencers for other aspects of tourism, culture and economy? I think it’s huge!”

Internet celebrities and influencers promote commerce and also bring a positive outlook to the public, which can “enhance people-to-people exchanges and cooperation”, Djauhari Oratmangun told the Global Times.

In addition to the three dialogues on digital economy, influencer economy and cross-border e-commerce, the event also acted as an intermediary between Chinese and ASEAN companies. The Fujian Asia-Pacific Economic and Trade Cooperation Promotion Association, the first provincial trade association in China to respond to the RCEP agreement, and paved the way for a series of agreements between Chinese industries and ASEAN, including a planned $5.6 billion deal signed by Fujian Holdings Group’s Eversun to invest in an ASEAN refinery.

“It’s amazing how the element of food can connect people with different languages ​​and different cultures from different countries,” she said.

The event will be made regular in the coming years, to guide and promote practical cooperation between China and ASEAN countries, as well as people-to-people ties between them. As the first major Chinese forum attended by senior officials, scholars and online influencers, the event was co-sponsored by the ASEAN-China Center, Global Times Online, the Department of Commerce of Fujian Province, the Foreign Affairs Office of the People’s Government of Fujian Province. , and Fuzhou Municipal People’s Government. It was supported by the China Public Diplomacy Association and the Mission of the People’s Republic of China to ASEAN, and co-hosted by the Fujian Asia-Pacific Economic and Trade Cooperation Promotion Association.