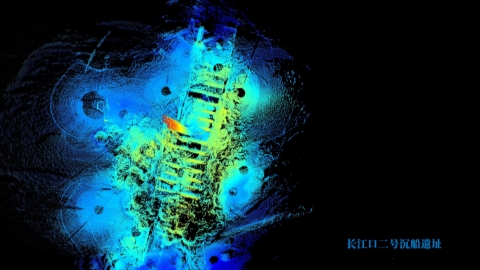 Workers ready to salvage former ship No. 2 from the Yangtze River estuary.

Location of the old ship.

A wooden ship dating from the Qing Dynasty (1644-1911) found sunk in the Yangtze River estuary will see its mysterious veil lifted after eight years with the launch of Europe’s largest ancient ship rescue and protection project. China in Shanghai on Wednesday.

The ship, named Old Yangtze River Estuary Ship No. 2, is a wooden sailing ship built around 1862-1875 during the reign of the Tongzhi Emperor.

It is buried in mud 5.5 meters deep and the area of ​​water where the ship sank is 8-10 meters deep.

The remains of the ship are approximately 38.5 meters long and 7.8 meters wide and it has 31 cabins based on current finds.

The ship’s upper deck and mainmasts are complete.

According to Zhai Yang, deputy director of the Shanghai Cultural Heritage Research and Protection Center, the vessel is likely a flat-bottomed sand vessel, widely used for water transport in Shanghai during the Ming Dynasties (1368-1644) and Qing.

In 2015, an underwater archaeological survey in the Hengsha area of ​​Chongming Island detected a sunken iron ship through sonar scanning technology.

The iron warship has been named the Yangtze River Estuary Ancient Ship No. 1. As archaeologists widened the scope of the scan, the wooden vessel was found north of the warship.

Exquisite items including porcelain kilns from Jingdezhen, the world-famous porcelain capital in northeast Jiangxi province, were found in four cabins.

“There are various categories and large amounts of cultural heritage items that are well preserved or can be repaired,” Zhai revealed.

“Some porcelain bears signs that they were made during the reign of the Tongzhi Emperor, providing important evidence of the ship’s history,” Zhai said.

The launching ceremony of the rescue and protection project.

Some porcelain work on the ship.

A mug found on the ship.

He shared stories behind the discovery of the vessel on Wednesday.

“When we first detected the vessel, it was completely covered in mud with only one mast exposed,” Zhai said.

“Underwater archaeological work was like a blind touch given the water quality and low visibility in the estuary,” Zhai said. “Even if we wear a diving flashlight with a strong light, we can hardly see anything.”

“It took six years to find out the value of the ship. But its exact shape, length and the objects on board will not be known until the ship is recovered.

“We reproduce the vivid scenes of people of that time during the archaeological work.

“Because sunken ships are usually buried under sand, they are able to hold a piece of history well, and we travel back in time during archaeological work.”

Zhai revealed that they only had one photo of the ship due to the water quality of the estuary and the porcelain was well placed in lines as seen in the photo.

“We were excited and amazed when we saw the photo,” he said. “This is the first time we have seen the true face of the ship.”

“There are still many mysteries behind the ship, such as its name, where it was built and what its destination was, which we hope to have answers to,” Zhai said. “We will solve them one by one, but it may take a long time.”

The Yangtze River Estuary Ancient Ship No. 2 is another landmark find in the history of Chinese underwater archeology after the Nanhai No. 1 freighter of the Southern Song Dynasty (1127-1279) .

Nanhai No. 1 is widely considered the largest and best-preserved ocean-going trading vessel of the Song Dynasty.

“It is a precious cultural heritage with an important history and scientific and artistic value,” he said.

A bowl found on the boat.

All salvage work is expected to be completed by the end of this year, or hopefully September, according to Fang.

“But it depends on weather, hydrological conditions and there are uncertainties during the rescue process,” he added.

The discovery of the ship provides important support for research on the “Maritime Silk Road” and testifies to Shanghai’s position as a world center of commerce and shipping in modern times and a milestone on the “Belt and Road”, Mr. Fang pointed out.

Due to its good condition and the rich array of items on board, the ship also has significant scientific value for Chinese and even world navigation, science and technology, maritime history research and porcelain, authorities said.

Due to the change in the flow of water currents and the conditions of the river bed, the preservation of the ship faces serious threats despite the efforts to protect it.

To protect it from natural and human damage, experts have suggested that archaeological work should begin as soon as possible for future protection and research.

“Because the underwater visibility of the Yangtze River estuary is almost zero, given the turbidity of the water, it is impossible to carry out underwater archaeological mapping and other work,” explained Zhou Dongrong, deputy director of the Shanghai Recovery Bureau.

“So we decided to salvage the whole ship after evaluating three salvage options.

“In this way, we avoid digging and it allows better preservation of the heritage on board in a short time and at a minimum cost”, he added.

The amount of sand in the Yangtze River estuary is huge, with rapid water flow, causing experts to abandon the rescue plan that was used for Nanhai No.1.

Some of the porcelain works discovered on the ship.

An auction in Shanghai as the city aims to create an international center for the trade of antiques and works of art.

Shanghai establishes an international center for the trade in antiques and works of art.

Instead, a huge arch-shaped box, 51 meters long, 19 meters wide and 9 meters high, supported by 22 “arch beams” will be used to encase the vessel, which will then be hoisted.

The entire box with the ship inside will weigh nearly 10,000 tons plus sand and seawater.

The technology, which will be used for the first time in the world, will merge advanced techniques such as tunnel lining and hydraulic pressure lifting, which have never been applied in the fields of cultural and archaeological heritage.

An old ship museum will be built on the former site of a shipping factory along the Huangpu River in Yangpu District for the public to explore the stories behind the old ship No. Yangtze River.

Two old docks will be transformed into an archaeological base of the sunken ship and the mysteries behind the ship will be solved here by archaeologists.

Meanwhile, the Shanghai International Antiques and Fine Art Trade Center was inaugurated at the Pudong Museum of Art on Wednesday.

From Oct. 26 to 28, the China International Antiques and Works of Art Fair will be held at the museum and will become an annual event from this year, authorities said.

During the 5th China International Import Expo this year, an exclusive antiques and fine art exhibition area will debut and is expected to attract a large number of leading international art institutions to exhibit. their collections.

Shanghai cultural and tourism authorities will establish a platform for supervising and managing the credibility of antiquities through digital means and blacklist auction companies engaging in irregular practices to regulate the market.