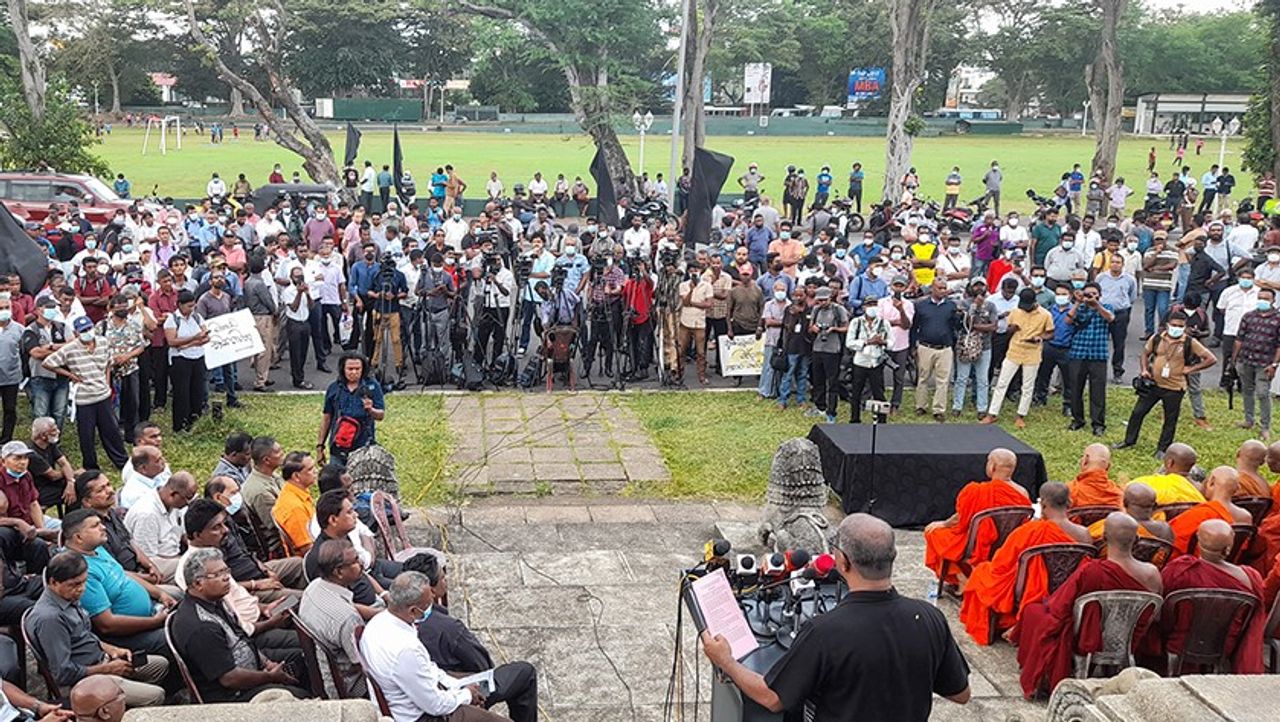 Thousands of workers, youths and students demonstrated in major cities and provincial towns across Sri Lanka on Tuesday to express their outrage at the ongoing police crackdown on anti-government protesters.

Tuesday’s protests were called by two trade union fronts – the Trade Union Coordination Center (TUCC) and the Movement of Trade Unions and Mass Organizations (TUMO) – and the United People’s Movement, which were forced to call for the action in response to widespread anger over the arrest. dozens of protesters.

In early April, tens of thousands of anti-government activists began to occupy Galle Face Green in central Colombo to demand the ousting of President Gotabhaya Rajapakse and his government and an end to soaring prices and scarcity of essential products. They then occupied the neighboring presidential secretariat.

Millions of workers struck across the country on April 28, May 6, and May 10 and 11. This was followed on July 9 by the largest protest in Sri Lanka’s history, which saw protesters enter and occupy the presidential palace, forcing President Rajapakse to flee the country and relinquish the presidency. The demonstrators then occupied the official residence and the Prime Minister’s office.

After being named interim president and then officially sworn in as president, Wickremesinghe imposed draconian states of emergency, denounced anti-government activists as “fascists” and “terrorists” and launched a hunt for nationwide police witches. A joint police-military operation on July 22 brutally expelled protesters occupying the presidential secretariat and its surroundings, arresting nine people and injuring dozens.

The demonstrators carried banners and placards stating: “Stop the repression of the Ranil-Rajapakse government”, “Release all arrested protesters”, “The multi-party government is a trap – line up for people power” and “Dissolve the parliament, yield to the voice of the people.

TUMO supporters demonstrated outside the Fort railway station in Colombo while around a thousand students from Kelaniya University, located on the outskirts of Colombo, gathered outside the university to protest the crackdown governmental. The TUCC mobilized around a thousand workers and supporters at Viharamahadevi Park in central Colombo and then marched to Independence Square where they held a rally.

Although workers and young people joined in these protests, the two trade union centers organized these events to deflect the anger of the masses. Fearing to mobilize workers against repression and in defense of democratic rights, union bureaucrats limited the action to a symbolic exercise and made no calls for workers to strike and join the protests.

The TUCC is dominated by unions affiliated with the Janatha Vimukthi Peramuna (JVP), which seeks to subordinate the protest movement to its campaign for an interim government made up of the discredited parliamentary parties and for parliamentary elections.

A leading partner of the TUCC is the Federation of Healthcare Professionals, led by Ravi Kumudesh. Last Saturday, he met Wickremesinghe, pledged his support and expressed his opposition to any continuation of anti-government struggles.

TUCC leaders, along with various “civil society” groups, including Buddhist monks, issued a so-called “Citizens’ Decree” in Independence Square. This includes calls on the Wickremesinghe government to end its state repression, the release of detained protesters, the lifting of all measures of the law on the state of emergency and the prevention of terrorism and the introduction of very limited social measures. He also demanded a new constitution, limiting the powers of the executive president, and a caretaker government for a short period, followed by parliamentary elections.

Both the TUCC and TUMO campaigns aim to sow illusions in the discredited parliament and capitalist system and to bind the working class and oppressed masses to existing bourgeois parties.

The TUMO, which is supported by the Frontline Socialist Party, demonstrated outside Fort station. Its leaders demagogically denounced the Wickremesinghe regime, declaring that they were ready to oust him like Rajapakse. But like the TUCC protest, they chanted slogans demanding a caretaker government and general elections while making a futile plea for Wickremesinghe to end the crackdown.

Both union alliances are hostile to the independent mobilization of the industrial and political might of the working class to defend their democratic and social rights.

When millions of workers went on strike on April 8 and May 6, rallying national support from the oppressed masses, the unions hijacked that strike with calls for an interim government and elections.

By blocking a nationwide political and industrial struggle against the government and the capitalist profit system, the unions have paved the way for the current and ongoing police repression.

Wickremesinghe’s denunciations of anti-government protesters as “fascists” and “terrorists” and the arrests of protesters are not isolated actions but preparation for much broader attacks on democratic rights.

Police and military repression and other draconian measures, such as the state of emergency, the extension of the law on essential public services and the mobilization of the army in all districts, continue across the country. island.

The Wickremesinghe administration, which is facing a severe economic crisis, intensified by the COVID-19 pandemic and the proxy war between the United States and NATO against Russia, is determined to implement all the demands of the International Monetary Fund and to suppress the inevitable resistance of the working class to these attacks. .

On Tuesday, the government raised electricity tariffs by more than 75% and plans to raise water tariffs by a similar amount later this week. He also appointed a committee to restructure the Ceylon Electricity Board. His program includes the privatization of all public enterprises, the destruction of hundreds of thousands of public sector jobs, the reduction of subsidies and the raising of taxes. Wickremesinghe is pushing for a multi-party government with the support of the unions to unleash these savage attacks.

As the Socialist Equality Party (SEP) has repeatedly explained, the ruling class and its government cannot implement these attacks peacefully and are preparing to intensify their repressive measures.

A protester at the TUCC march said: “I had to close my small business because of the crisis. The cost of living is skyrocketing and the government is stepping up the crackdown. I agree with you that a multi-party government would be established to impose IMF conditions. We need an alternative.

Two students attending the protest expressed their concerns and explained the difficulties they face due to the virtual collapse of the public education system.

“We do the advanced level [university entrance] exam for the second time, but we can’t get money for home tuition like we could before. All costs have increased exorbitantly. Power outages are also a problem,” they said.

An employee of Hatton Education Zonal said: “Ranil Wickremesinghe’s government is already implementing austerity measures. He has already started cutting our rights and allowances, and other things are being cut. It will go ahead with IMF privatization demands.

The Chinese diplomacy of think-tanks in Southeast Asia: exchange of ideas or echo chamber?