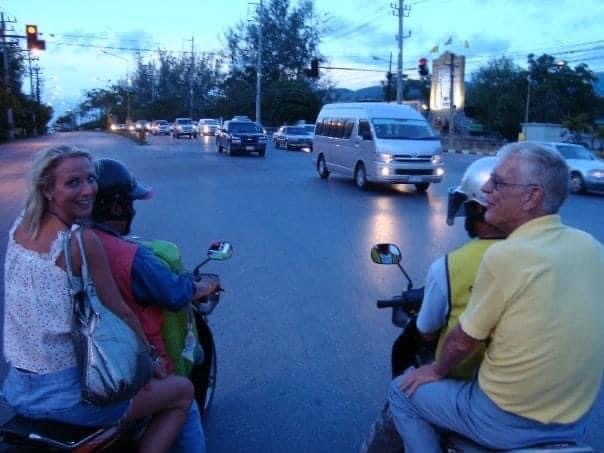 THERE IS a movie waiting to be made about the life and extraordinary moments of Stuart Mason-Parker, who died in Thailand at the age of 73, because they had enough color and excitement for 10 men .

Born in Ledbury, educated near Kidderminster and trained as a criminal barrister in Worcester, he became a prosecutor in Hong Kong, then switched sides to become a top defense lawyer, sometimes representing Triad gangs.

He had guns pointed at him, was arrested and deported to Manila, and even the legendary Alan Wicker asked for his perspective on the Hong Kong underworld for one of his Wicker’s World TV programs.

Later, he was the head of the law school at a Thai university, happy to hang out with the strays at his corner store.

His daughter Sara said: “My dad loved Asia, traveling to Thailand, Malaysia and the Philippines.

“Burma was a particular favorite and he often made trips to smuggle Burmese tapestries, with rubies hidden on them.

“He was said to be lying in the back of a van, a plastic blanket over him, as Westerners weren’t allowed to cross the border. He was arrested and held at gunpoint, but the money and liquor bottles seemed to get him out of a lot of situations.

“When he was temporarily in prison in the Philippines after he was inadvertently involved in a scam selling passports to a non-existent island, a friend was often allowed to climb the fence in exchange for a bottle of spirits.

“He was highly respected by the triads in Hong Kong, they called him ‘uncle’ and always asked for him after winning a case.

“We would have cars and gifts left, but he wouldn’t accept, because then you would be part of their world. He would venture into the walled city, never afraid of anything or anyone.

Known as Parker to his friends, Stuart Mason-Parker was a boy from Ledbury. Her father Ron was a podiatrist and her mother Hilda ran a hair salon. They lived in a flat above the High Street trade.

He was a boarder at Sebright School, Wolverley, near Kidderminster, where he met his lifelong friend George Groves. Together, they will share many adventures. He also played rugby for Ledbury, where his skipper was local legend Trevor Bethell.

Parker was enticed into a career in law by his mother, a fan of the American television show Perry Mason.

After his law studies in London, he trained in Worcester with lawyers Harrison Clark before crossing the city for Stallards.

During this time he befriended another young Worcester lawyer, David Hallmark, and they remained in constant contact over the years.

Frustrated at not having made the progress he wanted at Worcester, in 1979 Parker applied for a position in Hong Kong working with the prosecutors office.

This required a family move to Asia which would bring new challenges.

He decided to switch from a prosecutor to a defense attorney and started writing fiction books.

Sara added, “My dad achieved great success as a defense attorney and appeared on Wicker’s World to discuss the Hong Kong situation with Triads.”

Fifteen years later, he left for the Philippines and the strange adventure of buying an island in the Pacific with an Australian adventurer.

He was to be solicitor general and establish the constitution of this independent dominion, which would become an international tax haven with banking facilities.

These activities brought Parker to the attention of U.S. intelligence, who were concerned about the island’s strategic importance, as well as Manila authorities, who arrested him in 1998.

But he was later released without charge and deported to the UK. However, he hated being back in Europe and soon returned to Asia.

“Dad finally found his way to what he described as his Shangri-la, Hat Yai, in southern Thailand,” Sara said.

“His great passion was actually writing and at 55 he decided to step away from practicing law and took up a teaching course. He then applied for a job at Prince of Songkla University in Hat Yai where he became head of the faculty and spent his last working years lecturing in law.

“He was very happy there, living a quiet life among the street dogs, who were actually his favorite companions.

“My dad was not a materialistic person, he lived every day to the fullest, although he earned incredible sums, he left HK on a flight with only $20 in his back pocket in search of his next adventure.

“He loved to travel and embraced the local culture.

“Everyone who had the chance to meet him spoke fondly of him, this unique person, who really touched their lives and made them more free like him.”

Parker with his constant companion Leo

Stuart Mason-Parker died in Hat Yai Hospital after suffering from a long lung disease and is to be cremated in a ceremony at a Buddhist temple.

He is survived by three children, Christophe, Sara and Nicholas and a granddaughter, Brooke.

They will especially remember his bedtime stories about Pooch the Stray Dog and him rescuing stray dogs in Shek O and Penang.

Even at the end in Hat Yai, his constant canine companion Leo was known to be like Parker – old but strong.

A letter to the western left in Kiev