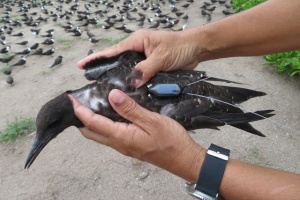 (Seychelles News Agency) – A group of local researchers have partnered with Max Planck Institute for Animal Behavior to track the movements of sooty terns by satellite.

Martin Wikelski, Director General of the Migration Department of Max Planck Institute for Animal Behavior, and Uschi Mueller were in Seychelles recently to help with the study.

Earlier this year, Rachel Bristol and her project partners Chris Feare and Christine Larose presented the results of their Sooty Tern monitoring project.

The project is of particular importance for the development of the Seychelles’ blue economy and marine spatial plan, as it has identified areas to which juvenile sooty terns have flown, possibly in connection with areas where food is abundant. .

It was through this project that the institute contacted SeyCCAT – Seychelles Climate Change Adaptation Trust – which funded the project, asking if it would be possible to deploy up to 300 of their Icarus satellite transmitters in the Seychelles.

“This new monitoring study will help us better understand the movements of Sooty Terns on Bird Island and will provide additional information on areas of the Indian Ocean that are important to them. This can help identify candidate areas for them. high seas protected areas as well as to an understanding of the multilateral nature of the protection of wide-range species, â€Bristol told SNA.

The researcher added that the German team in the island nation in June brought in 250 of their 5-gram ICARUS (International Collaboration for Animal Research using Space) satellite beacons.

â€œWe all went to Bird Island and put 156 tags on incubating adults. We marked both members of breeding pairs. We, the local team, then returned to Bird Island in August to tag the juveniles about to fly and to tag the chicks of the adult pairs that we had fitted with satellite beacons in June, â€he said. -she explains.

Bristol, who are very excited about this new development and the kind of information that can be collected, said the team is already receiving adult leads, “and the juveniles we have tagged should now also have taken off. and provide tracking information, however, we have yet to view their leads as we await upload of their beacon and movement details to the Movebank online viewing platform. “

She added that satellite tagging studies will also be useful in understanding the movements of other seabirds in the Seychelles – 115 islands in the western Indian Ocean, where other methods of tracking their movements are not feasible.

“This is a prime example of how SeyCCAT funding of pilot-type projects can lead to exciting new collaborations providing Seychelles with resources to conduct much larger studies,” the researcher concluded.

For its part, the trust said: “Our SeyCCAT grant has thus paved the way for much more detailed studies of Seychelles Sooty Terns than we had considered possible.”

When will David Brooks admit that conservatism paved the way for Trump?