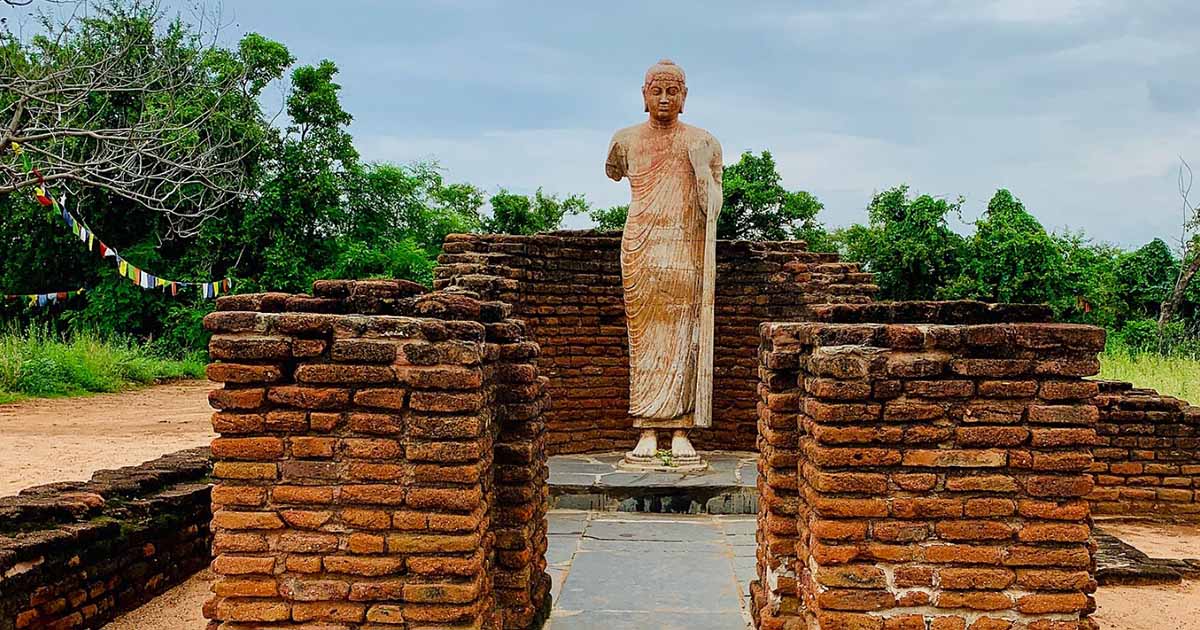 Nagarjunakonda is a historic town located in what is now Guntur district in the state of Andhra Pradesh in southeastern India. It was a very important Buddhist site and center of learning from the first to fourth centuries, but is now almost completely submerged under the waters of the lake created by the Nagarjuna Sagar Dam on the Krishna River.

A six-year archaeological dig by a team of dedicated archaeologists managed to salvage most of the relics and artifacts during the construction of the dam. These were moved to higher ground, a hill in the Nallamal range, which has now become an island in the lake. This partially submerged hill is now known as Nagarjunakonda or what remains of the original site which now lies under water.

Interestingly, Nagarjunakonda is named after the important Buddhist philosopher Nagarjuna, who has been linked to the site. However, the name is medieval and the association with Nagarjuna is not fully proven. In ancient times, when Nagarjunakonda was active as an important monastic and Buddhist center of learning, it was called Vijaypuri.

The first Buddhist philosopher Nagarjuna, who may or may not be directly related to the site of Nagarjunakonda, along with thirty of the eighty-four Mahasiddhas. (Himalayan Art Resources / Public domain )

Nagarjuna and his tenuous ties to Nagarjunakonda

Little is known about Nagarjuna’s personal life. According to most historians, he was active in the southern part of India during the second century AD. Buddhist tradition says he lived 400 years after the Buddha attained Nirvana. However, tradition also says he lived for 600 years, apparently confusing him with a later Nagarjuna, who wrote esoteric Tantric Buddhist texts.

It was the philosophy of the first Nagarjuna, with which the Nagarjunakonda site is associated, that was hugely influential and shaped Eastern philosophical discourse for almost a thousand years.

Nagarjuna was a Mahayana Buddhist best known for his madhyamaka (middle way) philosophy of sunyata or the void. His writings, including Mulamadhyamakakarika (Fundamental Verses on the Middle Path), the most famous of his expositions of the concept of emptiness, has inspired many commentaries in Chinese, Tibetan, Japanese, and Korean Buddhism. A specific reading of his thought, the Prāsaṅgika-Madhyamakais still the official position of the Tibetan school.

Obviously, Nagarjuna existed. But his own philosophy of emptiness would deny its existence while also denying its non-existence! He taught that ignorance is the source of all suffering through their belief in svabhava, which can be “translated” to mean its own being, its intrinsic existence or its own nature. It is the belief that things exist autonomously and permanently. Believing in these illusions means having a fallacious belief in the permanence of things. It is equally fallacious to believe in the opposite extreme of annihilation, which means that nothing in fact exists. The true nature of reality is emptiness, which means the absence not of existence but of intrinsic existence.

Scenes from the life of the Buddha carved in grayish limestone during the Ikshvaku dynasty in the 3rd century AD, discovered at the original site of Nagarjunakonda. (Rabe! / CC BY-SA 4.0 )

The accidental discovery and aquatic rescue of Nagarjunakonda

In 1926, a local schoolteacher came across an ancient pillar at the Andhra Pradesh site and reported his discovery to the government, which quickly established Nagarjunakonda’s archaeological potential. A French archaeologist made the first discoveries in 1926. A more sustained effort from 1927 to 1931 by a team of English archaeologists unearthed the ruins of several Buddhist stupas and chaityas, as well as other monuments and sculptures. Another excavation in 1938 found more monuments.

In 1954, with the site and its relics threatened by the construction of the Nagarjuna Sagar Dam, a six-year excavation salvage project unearthed and moved most of the monuments to the current site and to the mainland. Almost all important relics and artifacts have been recovered.

The incredible archaeological richness of Nagarjunakonda

The current site of the island of Nagarjunakonda in the Krishna River houses original remains, some monuments relocated from the flooded valley, an amphitheater and a museum containing sculptures and inscriptions from the nearly 2,000 year history of the site.

Although the oldest monuments reconstructed here are megaliths marking burial places which belong to around 200 BC, most of Nagarjunakonda (then Vijaypuri) is believed to have been built in the 2nd century AD.

The site served as the capital of the Buddhist Ishkvaku kings from the third to fourth centuries AD.

Nagarjunakonda or Vijaypuri was located in a valley surrounded on three sides by the Nallamalai Range which opened to the Krishna River which joined the open sea. This allowed the Ishkvakus to send Buddhist missions to Sri Lanka, Myanmar, Indonesia, Thailand and China.

Later, in the 15th and 16th centuries, the Bahmani, Vijayanagara and Gajapati kings became interested in Nagarjunakonda. The area came under the rule of the Qutb Shahi dynasty and later the Mughals and was donated in charity to a Matha, a Hindu monastery, at the end of the 16th century. When the archaeological finds were made there, Nagarjunakonda was still an isolated valley with a small village.

An elegantly carved Buddha statue (a replica) which is almost a symbol of the rescued site of Nagarjunakonda. ( cascoly2 /Adobe Stock)

At its height, Nagarjunakonda had over 30 monasteries and was the largest Buddhist center in southern India. The site’s great stupa or Maha Chaitya is the first monument with a dated inscription on the site. Originally built in the pre-Ishkvaku period, it was renovated with public funding in the 2nd century AD by an Ishkvaku king. Remarkably, more than 90% of donors were women. Tradition has it that the Chaitya holds an original bone fragment of the Buddha. The relic was found inside a golden reliquary placed amidst golden flowers in a small silver stupa. It was encased in pottery and adorned with pearls, garnets and crystal.

The Swastika Chaitya has bricks arranged in a swastika shape. In Buddhism, a swastika symbolizes the footprints of the Buddha. There is also a footprint at the Mahaviharavasin monastery site, which is said to be a reproduction of that of the Buddha.

A replica of a larger-than-life Buddha statue dominates present-day Nagarjunakonda, with the original placed in the museum. With the reliefs of the site depicting scenes from the life of the Buddha, the statue signals the predominantly Buddhist character of the site. The reliefs are however not as beautiful as those of the neighboring and slightly earlier Amaravati Stupa.

A relief of the Greek god Dionysus dating from the 3rd century AD found at the site of Nagarjunakonda Dionysus’ palace. (AH Longhurst / Public domain )

The Hindu ruins of the site and other historical discoveries

The Hindu temples of Nagarjunakonda are mostly Shaivite and belong to a later period. However, at least one temple, bearing an inscription of 278 AD, can be identified as Vaishnavite, based on the image of an eight-armed god. Two temples have statues of Shiva’s eldest son, Kartikeya (Murugan), and a large sculpture of Devi has also been found.

There are three 15th century temples, of which the Nageshvaralinga temple was founded by a Gajapati king. The other two were Jain temples which were later converted into Vaishnavite shrines by King Vijaynagara Krishnadevaraya.

The palaces of the Ishkavakus have not been unearthed but remains of a citadel, barracks, stables and cisterns have been found. Two of them that have been reconstructed, a plastered brick tank and a turtle-shaped tank, are said to have been used for the Ashvamedha ceremony of the first Ikshvaku king Vasishthiputra Chamtamula. The Ashvamedha was a declaration of power by a king in which he let his horse roam for a year, inviting the kings of other territories either to challenge him by stopping the horse or to accept his authority.

Roman coins found at the site attest to trade with the Roman Empire and some reliefs and carvings indicate Greco-Roman influence. Reliefs and an inscription also show some Scythian influence.

Although the jury is still out on whether Nagarjuna actually developed, wrote and taught his philosophy at the monastic universities of Nagarjunakonda or Vijaypuri, the existence of Buddhist learning centers at the site is undeniable. After becoming the capital of the Buddhist Ishkvaku kings in the early 3rd century AD, it continued to prosper until the 16th century.