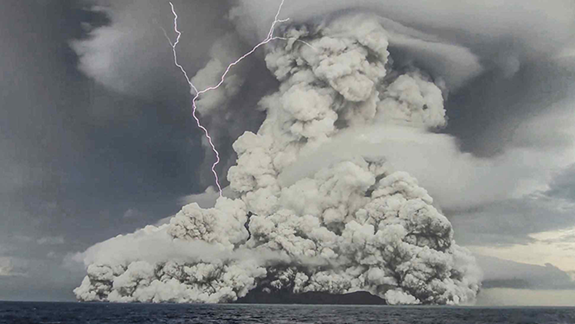 When a volcano in the South Pacific Ocean erupted in January 2022, NOAA researchers were well equipped to study the multi-hazard event by sky and sea. Key technologies and strategic partnerships enabled NOAA to issue warnings that have saved lives around the world, while collecting scientific data that will improve prediction models and disaster response for future events.

Explosions of the Hunga Tonga – Hunga Ha’apai volcano launched ash and toxic gases into the stratosphere at altitudes above 30 km. The plume of material formed a 500 km wide umbrella cloud and triggered record amounts of lightning strikes. The violent eruption provided a rare opportunity for scientists to learn more about sulfur dioxide emissions into the stratosphere.

As the sulfur plume moved west, researchers from NOAA’s Chemical Sciences Laboratory, CIRES and the University of Houston gathered on the island of La Réunion in the Indian Ocean, to about 8,000 miles from the initial volcanic explosion.

The plan was to use specially designed balloons to lift light aerosol sensors high into the stratosphere, where they could collect air quality data as the plume passed overhead. NOAA satellites tracked the movement of the volcanic cloud, and the science team worked quickly to prepare.

The science sensors attached to the balloons were Portable Optical Spectrometers, or POPS. POPs were invented at NOAA’s Chemical Sciences Laboratory and then licensed to a small manufacturing company called Handix Scientific.

Licensing the technology meant that the device could be improved, marketed and made available to researchers around the world in large quantities. Thanks to this successful transfer of technology, NOAA scientists were able to quickly order and dispatch many units of POPS and complete their mission.

A week after the explosion, the plume arrived above the island’s high-altitude Maïdo atmospheric observatory. The search party was ready with their equipment. Scientists successfully launched the balloons and are now using the data to refine atmospheric models.

This series of events marked the fastest scientific response to a volcanic eruption to date, and the data will improve researchers’ collective understanding of how volcanic explosions affect the Earth’s atmosphere. Without the licensing agreement in place, this unique opportunity would have been lost.

Meanwhile, halfway around the world in the Pacific Ocean basin, the eruption generated ocean waves that rippled around the planet and triggered widespread tsunami warnings. The alerts were triggered by a network of Deep-ocean Assessment and Reporting of Tsunamis (DART) buoys, which are strategically positioned in the ocean and send real-time data to tsunami warning centers.

After the volcanic eruption, DART buoys recorded the propagation of tsunami waves and triggered critical tsunami warnings for many coasts which were subsequently inundated.

The DART buoy system was originally designed and developed at NOAA’s Pacific Marine Environmental Laboratory. The system was patented and licensed to a private company, Science Applications International Corporation, to market and sell DART buoys worldwide. This invaluable network has been in place for decades and is an essential part of NOAA’s life-saving tsunami warning system.

At the time of the volcano’s eruption, while the DART buoy array was recording tsunami wave data, two unmanned ocean drones happened to be positioned in the Pacific Ocean to collect data for a research mission from the NOAA. The mission was one of many ongoing collaborations between NOAA and drone manufacturer, Saildrone.

NOAA’s public-private research partnership with Saildrone allows the two collaborators to share ideas, expertise and other materials while jointly conducting research and further developing drone technologies that benefit society. This research partnership has produced significant economic benefits for Saildrone and has served as the basis for ongoing NOAA missions using Saildrone vehicles.

The Saildrones that were deployed in the Pacific Ocean during the volcanic explosion were able to detect jumps in atmospheric pressure and capture crucial information in a region of the ocean with little observation.

This data is particularly valuable because only about 5% of tsunamis are generated by volcanic activity, rather than earthquakes. High-resolution drone measurements, combined with DART buoy recordings, will help scientists better understand these types of rare events and incorporate volcanic tsunamis into the model used to inform tsunami hazard response.

The impacts of climate change affect communities around the world, and scientists predict that many types of natural disasters and hazards are likely to become even more intense in the decades to come. An essential part of NOAA’s mission is to build a Climate Ready Nation, in which people share an understanding of climate change and work together to address the climate crisis.

Innovative technologies and strategic research partnerships are essential to accomplishing this mission because they enable NOAA to provide cutting-edge research and science-based services that help build community resilience, promote economic growth and to ensure the safety of people.

These partnerships allow NOAA scientists and private sector partners to work together to conduct research and transform new science into products and services that benefit the public. The Technology Transfer Program also helps move inventive NOAA technologies, such as POPS devices and DART buoys, out of NOAA labs and into the hands of private companies that push the technologies to the next level so that they can be used worldwide.

NOAA’s technology transfer activities are already having enormous impacts globally, and these efforts will become even more important as NOAA continues to leverage technologies and partnerships to research and respond to natural disasters and help build a climate-ready nation.