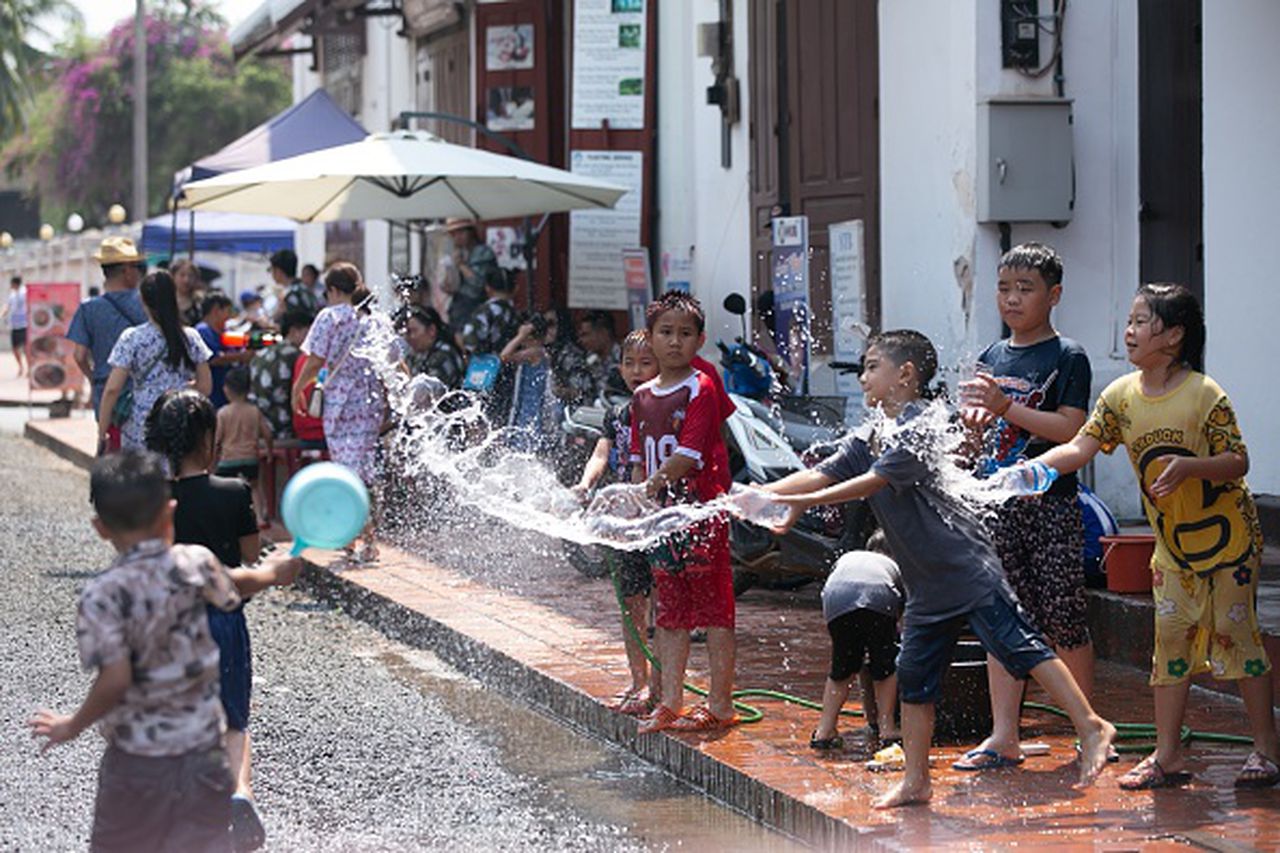 In many Southeast Asian countries, such as Myanmar, Thailand, Laos and Cambodia, the arrival of spring also marks the start of the new year. Songkran, as the festival welcoming the new year is called in Thai, is often celebrated with playful water fights through the city streets over the course of three chaotic days.

In 2022, Songkran will start on April 13 and last until the evening of April 15. Dates are calculated via the lunisolar calendar, which takes into account both the movement of the sun through the zodiac and the cycles of the moon. Specifically, the dates mark the period when the Sun leaves the constellation of Pisces and enters Aries.

As the days go by, the cities are transformed into playful battlefields. Children come out of their houses armed and gangs of revelers gather on the sides of the roads ready to harass passers-by. This, however, is a war with water.

As a scholar of Thai religion and culture, I have done field research in Bangkok and Chiang Mai for many years. I first met Songkran in Bangkok in 2010, and it was a shock to me. After enduring a few discreet squirts from kids in my neighborhood, I emerged into a full melee; staying dry was simply out of the question.

In Theravada Buddhism, the religion practiced from Sri Lanka to Laos, it is the most important holiday of the year. The day is known as Sangkren in Cambodia, Thingyan in Myanmar or simply Pi Mai in Laos.

In the Diaspora, Songkran festivals are held wherever there is a Theravada temple, including Los Angeles and Washington, D.C.

The festival is a clear demonstration of “sanuk”, the Thai emphasis on making activities fun, when many class and generation hierarchies are suspended, at least during the water war.

In the days leading up to the start of Songkran, roadside stalls began selling cheap plastic squirt guns – many of which break at the first pull of the trigger – to groups of “armed” children. waiting to soak up adults they once obeyed and respected. . The most creative children fill their water tanks with ice, ensuring that victims wince when hit.

Along Bangkok’s main streets or around Chiang Mai’s city moat, groups gather, firing squirt guns and lifting handfuls of viscous chalk powder to slap each other – the chalk, that is. by the way, being a traditional sunscreen, often presented as a natural product. beauty aid.

For the past two years, concerns over COVID-19 have put a damper on the festivities, as governments try to limit the number of attendees and contact between them.

Having spent a significant portion of the past 20 years living and writing about the area, I’m struck by how Songkran mixes a public carnival with family relationships. In rural villages, Songkran signifies both meetings and celebrations. Many families are supported by remittances from members working in Bangkok or overseas, and the holidays provide a chance to return home with gifts, money, and temple donations.

Here too, things turn to the party. In 2015, I spent Songkran in a fishing community near Nong Khai in northeast Thailand. The city was suddenly filled with new faces – people who had worked in factories in Korea, married overseas, or simply lived and worked in Bangkok. On the morning of each day, a tent was set up along the road, with dishes of spicy som tam papaya salad, ground pork larb and copious amounts of beer.

A hose constantly fed a series of buckets, and as the cars came down the highway, each of us carried a fully loaded bucket of cold water down the road to soak the drivers.

Of course, this mixture of chaos and alcohol can have disastrous consequences. The number of road deaths increases every year during Songkran week – in 2018, there were 418 drink-driving fatalities in Thailand alone.

The holidays are not limited to a simple water fight. In Thai versions of the Hindu-Buddhist myth, the day is inspired by rituals surrounding the severed head of Kapila Brahma, or Kabila Phrom in Thai, a Hindu sage who challenged a poor child with a riddle. A child who guessed wrong would lose his mind, and the confident sage announced that he himself would suffer the same fate if the child guessed right. But the child could understand the speech of animals and hear the correct answer. The sage lost his head, but his magic was so powerful that his severed head would stop the rains if thrown into the sky, or dry up the seas if it touched the ground.

In the Burmese version, this myth arises from a conflict between two groups of deities, and the headless body of Brahma was given a new elephant head and thus transformed into the Hindu god Ganesh.

In each version, a group of divine women—daughters of the sage in some versions, daughters of the god Indra in others—then took the original head and enshrined it in a cave on Mount Kailash in western Tibet. Each year, one of the girls rode a different beast depending on the day of the week Songkran fell and took the severed head in procession.

This year, the named girl rides a donkey, wears a champaka flower and wears green – something ordinary believers can do to increase their fortunes too. In Bangkok, this divine procession takes the form of a parade and a beauty contest to elect “Miss Songkran”.

A time for reflection

European New Year celebrations take place during the winter, when the days are short. They are celebrations of resilience in the hope that the world is about to turn to light and warmth again.

But in Southeast Asia, the hard season does not coincide with winter. Indeed, the time of day only differs by a little over an hour between June and December, and the winter months have temperatures that remain quite pleasant.

The significant seasonal variation is rather the monsoon. April is the time just before the onset of hot, dry weather, when the monsoon is about to begin and agriculture is most desperate. Water wars acquire a sort of sympathetic magic, presaging the coming rains.

It is also an opportunity to thank those who have provided support and to bring hope for what is to come. Every Songkran, individuals travel to temples near their hometown, where they make a donation, listen to Buddhist sermons, or perform acts of service.

Many honor their elders by pouring water on the palms of their elders and also on images of the Buddha, a symbolic gift of coolness and humidity, given the almost unbearable heat and dryness of the month.

Each of these aspects – the carnival water fight, the mythical story of the rain-destroying head, the bathing of the hands of the elders and the image of the Buddha – emphasize the importance of water as a source of renewal. It is also a celebration of life in the midst of difficulties; a sign of his resilience and even of his joy.