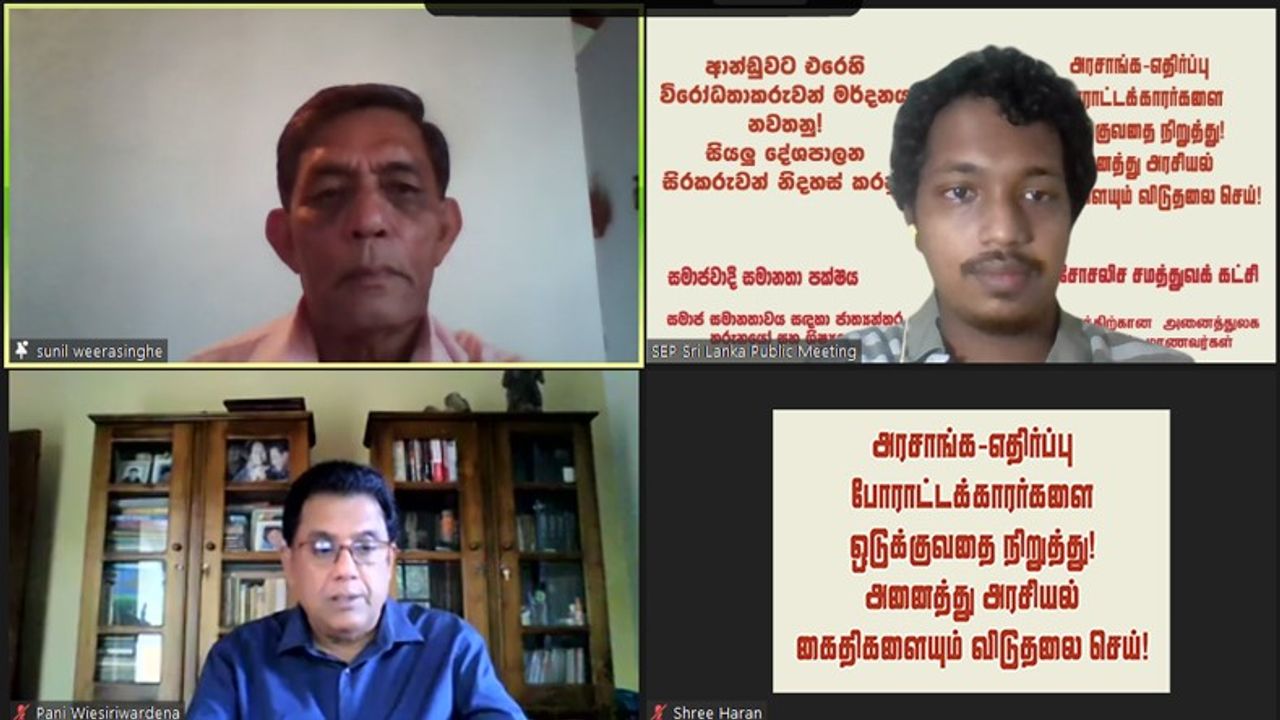 The Socialist Equality Party (SEP) and the International Youth and Students for Social Equality (IYSSE) in Sri Lanka have organized a major online meeting entitled “Stop the crackdown on anti-government protesters! Free all political prisoners! September 25. It followed an extensive campaign among workers, students and young people in major cities.

The online event was followed on Zoom by around 70 people and several dozen more via the party’s Facebook page. In some areas, listeners gathered in groups to join the meeting, using the same device due to the poor internet reception that is prevalent in many parts of the country. The video of the meeting has so far been viewed by more than 1,000 people, with another 350 sharing it.

“The government’s only solution to the economic crisis is a savage attack on social conditions as demanded by the International Monetary Fund (IMF). The ongoing state of repression is an attempt to crush any resistance to this social aggression,” he said.

Sunil said thousands of anti-government protesters involved in popular protests have been arrested since April. The most recent arrests concerned three activists from the Interuniversity Student Federation (IUSF), including its leader, who were arrested by the police during a peaceful demonstration. They were detained for 90 days by the Wickremesinghe government under the draconian Prevention of Terrorism Act (PTA).

“Notwithstanding our political difference with the IUSF and various other groups involved in the protests, the SEP condemns this vicious witch hunt. We demand the immediate and unconditional release of all political prisoners and the dropping of all charges,” he said.

“The struggle led by the SEP and the IYSSE against state repression and for the release of all political prisoners”, he continued, “is based on the mobilization of the working class to defend democratic and social rights . This involves campaigning for an international socialist perspective and for a workers and peasants government in Sri Lanka.

Sakuntha Hirimuthugoda, member of the SEP Political Committee and leading member of the IYSSE, told the meeting that the escalation of state repression was a serious warning for workers and young people who will inevitably come into struggle against the social attacks of the government.

Students and young people have repeatedly protested against state repression and for their basic democratic rights, he said. “To succeed, however, young people and students must politically reject these groups that mislead them. The IUSF and the pseudo-left Frontline Socialist Party (FSP) are diverting students from the working class, which is the only revolutionary force capable of waging the struggle against capitalism, the source of these anti-democratic attacks.

Hirimuthugoda cited a recent IUSF meeting, held in the name of building a “mass movement” against state repression. Among the participants were capitalist parties, such as the opposition Samagi Jana Balawegaya (SJB) and Janatha Vimukthi Peramuna (JVP), trade unions and various false left groups. The speaker pointed out that the leaders of the SJB were members of the United National Party government of Wickremesinghe, which had ruthlessly suppressed workers and the poor. The JVP had also supported state repression, he said.

Hirimuthugoda urged students and youth to reject the policies of IUSF and FSP, saying they were a political trap, and urged them to study the revolutionary socialist perspective advanced by the SEP and IYSSE and join their ranks.

Closing speaker Pani Wijesiriwardena, a member of the SEP Political Committee, began by pointing out that a day earlier, President Wickremesinghe had issued an extraordinary gazette, classifying large parts of Colombo as High Security Zones (HSZ). . This was a further escalation of government repression and the use of dictatorial methods, he said, adding: “The SEP totally opposes this undemocratic order from the HSZ and demands its immediate withdrawal.” .

Rejecting Wickremesinghe’s previous claims that he only acted against those who violated the Sri Lankan constitution, Wijesiriwardena said: “In fighting for their interests, the workers and the poor are not bound to obey the dictates of Wickremesinghe and the ruling elite.

Referring to the pioneers of Marxism, Wijesiriwardena said: “The state is an organ of class domination. The capitalist state is the main instrument used by the ruling class to maintain wage slavery, oppress workers and trample their social and democratic rights.

When mass struggles erupted against the Rajapakse government in April and turned into a general strike involving millions, the FSP and other middle class groupings, as well as trade unions, called for a multi-party caretaker government of parliamentary parties, continued the speaker. .

“The FSP and other like-minded organizations pushed the workers into the hands of the capitalist parties, paving the way for the Wickremesinghe government and the ongoing repression. The SEP urged workers to reject this trap of the multi-party caretaker government from the start and campaigned for the independent mobilization of the working class from a revolutionary socialist perspective,” the speaker said.

“Social inequalities, imperialist rivalries and wars, unemployment, inflation, poverty, malnutrition and attacks on social democratic rights have reached their highest level since the Second World War. We can see millions of workers around the world now entering the class struggle against these attacks,” he said. Referring to the international situation, he stressed that the political unrest in Sri Lanka was an acute expression of this global crisis.

“As Trotskyists,” he continued, “we believe that the international working class is the only social force that can defend the social rights and the democratic rights of the masses.”

Globalized production, he continued, has integrated the working class internationally and transformed it into a giant social force. Wijesiriwardena then quoted David North, chairman of the international editorial board of the World Socialist Website and the American SEP, which declared: “The working class has enormous power if they know how to use it.

Wijesiriwardena concluded that the critical issue in the defense of democratic rights was to fight for a workers’ and peasants’ government committed to the socialist reorganization of society. This, he said, is the significance of the SEP’s campaign for a democratic and socialist congress of the workers and the rural masses based on representatives of the independent action committees of the workers and the oppressed masses. He called on all participants in the meeting to join the SEP.

A Facebook listener said he fully agrees with the SEP program, but asked if there was a short-term program that could make it a reality. Responding to the question, Wijesiriwardena said that the SEP program was based on a scientific analysis of the objective situation, and that history has shown that the so-called short-term programs peddled by the opportunists created a disaster after the another for the working class.

“To secure workers’ rights, there is an urgent need to abolish the office of the executive presidency and build an international anti-war movement to stop a destructive global war,” he said. This program, he says, became a reality in 1917 when the Bolsheviks responded to the crisis caused by the First World War, leading the working class to the seizure of power and the establishment of a workers’ state based on the Soviets – democratic organs of the workers and the oppressed masses.

Sunil responded to a question about the nature of the action committees proposed by the SEP.

“The main concept behind the formation of work action committees is the independence of the working class from the capitalist class and from the pseudo-left and pro-capitalist trade unions,” he said. declared.

“These action committees should be formed as part of an international alliance, which was advanced by the ICFI in its call for an International Alliance of Rank and File Committee Workers. In the October Revolution of 1917, these independent workers’ and peasants’ organizations were the Soviets, and they became the instruments of the revolution,” Sunil said.