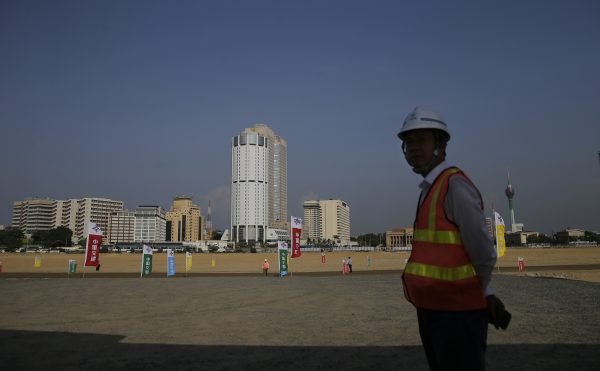 In this January 2, 2018 file photo, a Chinese construction worker stands on reclaimed land in the Indian Ocean for the Colombo Port City project, launched as part of China’s ambitious One Belt One Road initiative, in Colombo, Sri Lanka.

When President Gotabaya Rajapaksa and his family took power in Colombo in 2019, Beijing had reason to celebrate. A few years earlier, the new president’s older brother, Mahinda, had been instrumental in heralding a new era of Chinese influence in his country, hosting a series of dazzling infrastructure projects as part of Beijing’s flagship Belt and Road Initiative (BRI).

The projects had turned Sri Lanka into a strategic outpost in the Indian Ocean for Beijing. Geography had been particularly important: Sri Lanka gave China access to waters beyond the Strait of Malacca choke point between Malaysia and Singapore, through which much of China’s trade goes. Africa and Western Asia.

But after Mahinda Rajapaksa lost power in 2015, a difficult period of coalition politics ensued and Beijing lost the privileged access it once enjoyed. When the Rajapaksa brothers finally returned to take over the presidency in 2019 and win parliamentary elections with a landslide the following year, Beijing hoped it could strengthen its presence in the Indian Ocean through increased cooperation with them.

All that has now changed.

In recent days, clashes have erupted in the streets of Colombo, claiming lives and forcing Prime Minister Mahinda Rajapaksa to resign and be quickly airlifted from his residence. The political crisis seems unlikely to be resolved any time soon, even as Sri Lanka struggles to access the funds needed to pay for its imports.

The ongoing collapse in Colombo has brought about a dramatic change of fortune for Chinese foreign policy, and it could also have serious implications for Beijing’s presence in the Indian Ocean and the future potential of its global investment plan. in infrastructure.

Even before the Rajapaksas came to power in 2019, popular protests had hampered Chinese infrastructure projects in various parts of the country. But in the current economic crisis, these projects have been touted by protesters as infamous examples of Sri Lanka’s crippling debt problem. A posh port in Hambantota – the hometown of the Rajapaksas – cost $1.4 billion in Chinese loans, but lost $300 million in six years. An airport was built nearby with a $200 million loan from China, but it was used so sparingly that it couldn’t even cover its own electricity bills at one point. A conference center in the same city cost more than $15 million but has gone largely unused, according to reports.

China’s failed projects are already helping to fuel criticism that its infrastructure investment is a “debt trap”. These stories will cause particular concern in many poor countries with income levels far below those of Sri Lanka. If Sri Lanka – a country that has led South Asia on several socio-economic indicators for several years – has not been able to recoup the benefits of such a chic infrastructure, Chinese debt is unlikely to reassure countries. such as Nigeria, Kenya or Ethiopia.

But making matters worse has been China’s own response to the crisis. So far, Beijing has been conspicuous by its absence in terms of offering help to Colombo. Prior to its default on foreign loans, Sri Lanka appealed to Beijing to reschedule its loans. But China was reluctant to renew loans under the BRI, fearing it would set a bad precedent for its investments in other parts of the world. In the end, Sri Lanka turned to the IMF for help.

To some extent, Beijing’s own hands have been tied. A new outbreak of COVID-19 in major Chinese cities has troubled President Xi Jinping’s “zero COVID” policy. Shanghai has been under strict lockdown rules for weeks, sparking widespread discontent and economic passivity. Last April, industrial production across China fell 2.9% from a year earlier. Retail sales fell more than 11% year-on-year.

But by its absence, China has now ceded strategic space to India. New Delhi has so far provided more than $3 billion in financial aid to Colombo and deferred repayment of loans worth at least $2 billion. India’s influence during the crisis was so great, in fact, that a student protester in Colombo said Quartz“Yes [the Indians] ask the president for the clothes he has on his back, he must return them.

With the spotlight on Ukraine, Beijing might not think too much about its demise in Sri Lanka. But if the crisis persists in Colombo, it could have long-term repercussions for China’s strategic influence in the Indian Ocean and the future of its Belt and Road Initiative.

Loans vs Lines of Credit: Which is Best for You?