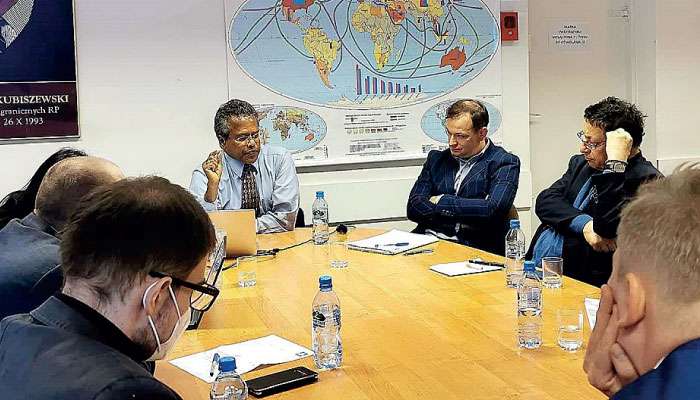 By Jakub Knopp and Nikita Bogdanovich

Warsaw, Poland: Born in Sri Lanka and educated at Harvard and Minnesota, Professor Patrick Mendis has described the island nations of Taiwan and Sri Lanka as the two “unsinkable aircraft carriers” in the evolving rivalry between China and the states. -United. He made the remarks during a series of lectures at the University of Warsaw in Poland.

In his lecture on “The American Vision, the Chinese Mission: Will There Be a War Against Taiwan?” At the Faculty of Political Science and International Studies, the former US diplomat presented a historical analysis of Sino-US relations. He focused on Taiwan, Sri Lanka and other strategic and global issues.

Professor Mendis first presented the evolution of the geostrategic situation and the changing nature of bilateral relations between China and the United States. Thinking back to the history of the world, he highlighted how international relations between and among countries have known the different stages of change and engagement. He then highlighted the periods of “hostility and cooperation” while giving examples of the United States’ War of Independence (against the British) and the recently signed AUKUS Defense Pact with the United Kingdom, the United States. United and Australia.

With the continued economic growth and the global power of China, Beijing and Washington are increasingly involved in various types of political, economic, military and even technological conflicts, explained Professor Mendis. Today, the United States and China are vying for the control and implementation of new technologies around the world, such as 5G technology, artificial intelligence, space exploration and cybersecurity.

The increase in Chinese military power and influence in the Indo-Pacific region and other countries is of great concern to the United States. US leaders are now mainly alarmed by China’s strategic position in East and Southeast Asia as well as South Asia, where Beijing has undermined Washington’s traditional position in economic, political, diplomatic capacity. and military. This is most important in the South China Sea, where Beijing has built man-made islands projecting military and naval power.

To understand how the United States and China became the most powerful countries in the world, one needs to delve deeper into history. Professor Mendis said that since its inception, the United States has evolved into two traditions of politics and foreign policy. With the “experience” of pilgrims and settlers, the Founding Fathers began to have a new American “experience” in the new nation.

Along with the settlers, who landed in Virginia, the nascent nation pursued a strategy of centralized economic development while harnessing natural resources for greater wealth and capital formation through a federal banking system. The colonial experience influenced Alexander Hamilton to formulate manufacturing and industrial policy as first Secretary of the Treasury in the administration of President George Washington.

The Pilgrims, who arrived on the American coast near Boston in Massachusetts, focused more on religious freedom and popular democracy, which were later championed by Thomas Jefferson, Washington’s first secretary of state. Naturally, these motivations caused subtle but “creative” conflicts throughout the “American experience”. These conflicting motivations between wealth creation and religious sentiment have led to the development of a new American policy and an innovative business that is even visible in the current political environment, explained Professor Mendis.

Throughout the American Experiment, the United States pursued what is now dubbed “the Empire of Freedom,” which was invented by Thomas Jefferson, who became America’s third president. Influenced by the legacy of the Pilgrims, Jefferson promoted ideas of democracy and religious freedom that are still championed by the US State Department, the diplomat added.

Continuing the other traditions of the settlers, the young United States officially started and promoted its trade with China for economic development. Admiring Chinese culture and the economic prosperity of the Middle Empire, the new nation sent its merchant ship, “The Empress of China,” from New York Harbor in 1784 on President George Washington’s birthday to Canton (now Guangzhou near Hong Kong). He stressed the importance of China for the new republic.

These historical traditions have been revived in the recent past, especially after Deng Xiaoping introduced open economic and reform policies after the death of Chairman Mao Zedong. Hoping that Beijing would essentially follow the path of the American Experience, US President Bill Clinton and other congressional leaders supported China for its integration into the world market. Thus, the Clinton administration was a strong supporter of China’s entry into the World Trade Organization.

US and world leaders have now started to realize that China has other intentions as leaders in Beijing have taken a more assertive and confrontational path, in defiance of religious freedom and human rights than the United States expected China as a global player.

In addition, Professor Mendis noted that once the economic reforms were carried out, the Chinese people were no longer as poor as before; thus, a new form of nationalism has emerged with authoritarian and communist characteristics since President Xi Jinping introduced the Belt and Road Initiative (BRI). Therefore, when the people were finally given the opportunity to prosper and development began to gain ground thanks to the BIS, the desire for political freedoms and democratic values ​​is no longer a sensitive chord among the Chinese leadership.

In his lecture, Professor Mendis drew an appropriate parallel between the historic American push to the west and the “manifest destiny” with that of the ancient Silk Road and the Chinese attempts to gain influence over the Eurasian landmass. , as evidenced by the ongoing expansion of BRI projects. and activities in Central Asia and Eastern Europe.

This latest example of the Chinese desire to venture west into Eurasia was presented by the evolution of the Earth’s centuries-old Silk Road from the Han Dynasty to the height of cosmopolitan China under the Tang dynasty. The famous 15th-century voyages of Admiral Zheng He during the Ming Dynasty are the other part of the BRI’s Silk Sea Route that crosses Sri Lanka, Professor Mendis explained.

Developing this historical backdrop, he stressed the importance of the BRI and the psychological warfare waged by Chinese “Wolf Warrior” diplomats. In the light of growing Chinese dominance in the realms of space and cyberspace, this could prove vital in a struggle whose ultimate goal is to control the minds of people in China and countries associated with it. the BIS. Indeed, the Chinese Communist Party would end up realizing the “Chinese Dream” to revive “the Heavenly Empire”, predicted Professor Mendis.

The difference between the “Chinese Dream” and the “American Dream” is the idea that the former is formulated as a national dream with nationalism in mind, as opposed to an individual dream with “life, freedom and The pursuit of happiness “. in the USA. Thomas Jefferson is credited with the American phrase in the United States Declaration of Independence.

In addition, Professor Mendis also touched on geopolitical and geoeconomic issues with a focus on Taiwan and Sri Lanka, which he dubbed these island nations as the two “unsinkable aircraft carriers” that would supply China or United States indispensable bridgeheads. to mount additional attacks or to defend their spheres of influence and main supply routes. He applied the idea of ​​an “unsinkable aircraft carrier” to Sri Lanka which was originally referred to Taiwan (then Formosa) by General Douglas MacArthur of the United States.

Additionally, the professor said Taiwanese millennials born into a free and democratic society lack the “cold war” mindset that prevails in their ancestral circles. Importantly, he added that the recently signed AUKUS defense pact by Australia, the UK and the US identified itself as a “deterrent from China,” but not so much. as a step for another cold war mentality.

However, the military pact would serve as a catalyst to establish a block of democratic, like-minded countries in the Indo-Pacific as well as a force multiplier. The US-led defense agreement would also allow for a greater degree of military interoperability beyond the trilateral partnership to include French, German and Japanese naval and air forces operating in Indo-Pacific waters.

Overall, the conference was insightful and innovative about China’s hidden motivations and the founding vision of the United States, as Professor Mendis stressed the importance of looking back to try and get a feel for what that could happen to us.

A sobering statement by Prof. Mendis was that “Taiwan in the Pacific Ocean all roads” and “Sri Lanka in the Indian Ocean” sum up the historical Chinese sentiment emanating from the “century of humiliation” and the injustice felt by the Chinese people since the First World War.

(The two authors who wrote this report are postgraduate students at the Faculty of Political Science and International Studies at the University of Warsaw in Poland.)

High-yield loans are particularly concentrated in black neighborhoods in Chicago