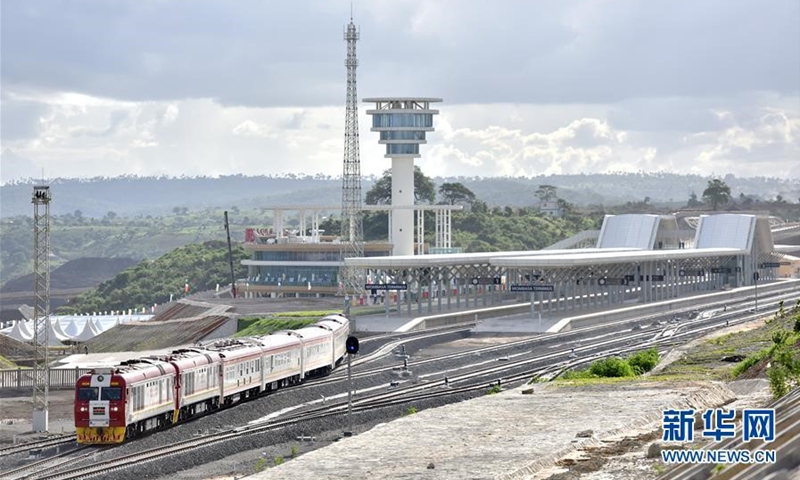 By Virginia A. Calvo Last updated Sep 14, 2021
Share
“My friend, please listen to my long history of the railroad.

It cements friendship and brings hope.

My hometown is more beautiful day by day,

My compatriots are more and more fiery day by day. “

The railway on which Kenyan singer Sudi Boy sings is the Mombasa-Nairobi Standard Gauge Railway (SGR). Stretching from the port city of Mombasa in the east to the capital Nairobi in the west, the SGR is Kenya’s first railway since independence. Although the construction only took less than three years, Kenya has been waiting for it for a long century.

Mombasa and Nairobi were previously connected by a narrow gauge railway (1 meter gauge) built in 1896. Due to dilapidated and aging equipment, the railway could travel at only 22 km / h on average. and the whole trip would take 21 hours. In addition, its operation was unstable. Any failure would put it out of service for days and there were frequent accidents such as derailments and collisions with animals.

The narrow gauge railway could also not meet the development needs of the port of Mombasa. Being the largest port in East Africa, the Port of Mombasa has 17 international shipping routes and trade links with 80 ports around the world. Most of the goods entering and leaving East Africa are processed here. However, due to the limited capacity of the narrow gauge railway, most goods had to be transported by road. To some extent, frequent overloading of road traffic and port loading delays have weighed on the development of Mombasa and Kenya as a whole.

A new railway was a hundred year dream for the country and the people of Kenya. Since its inception, SGR has fostered the growth of the local logistics industry. Goods loaded in Mombasa in the morning will arrive in Nairobi in the afternoon, with logistics costs reduced by up to 40%. The transport of goods from the port to the hinterland of East Africa has become much more efficient. As the rail network and supporting infrastructure in East Africa improves, the logistics sector across the region will be galvanized, and economic cooperation and cultural exchanges between countries will reach a new high.

Mombasa Terminal of the Mombasa-Nairobi Railway

The integrated development of the Mombasa-Nairobi Railway, Mombasa Port and Mombasa Special Economic Zone unveils an exciting scene of industrialization. As President Uhuru Kenyatta said with emotion, the SGR “will reshape Kenya’s history for the next 100 years”.

II. A nature railway that takes care of animals

The SGR passes through Tsavo National Park, Kenya’s largest wildlife reserve. The destination, Nairobi, is one of the few capitals in the world to have a nature reserve. The vast areas along the railway line are home to almost all African animal species, representing a natural environment of extraordinary value. How to make sure the railway works in harmony with the wildlife and how to make the SGR a nature railway that cares for animals – this question has been on the minds of builders from the very beginning.

During construction, China Road and Bridge Corporation adopted extremely strict standards and hired specialized companies for environmental impact assessments. Digging and other work along the line was carried out during the day only, and construction was banned at night so as not to disturb the animals. In order to avoid collisions with wild animals in Tsavo National Park, the SGR tracks are not laid on the ground like the narrow gauge railway. He used a closed design and built overpasses so that wild animals could pass safely.

To protect migrating herds, the builders painstakingly designed 14 large underpasses seven meters high, enough to allow giraffes to pass without lowering their necks. They also built more than 100 culverts, which allow animals like zebras to access water and serve as underground passages for small animals. Protective fences and embankments were built in parks and swampy areas, to prevent animals from climbing on tracks and running on trains.

Part of the SGR crosses the mangroves of the parks of Mombasa. The construction team drew an eco-friendly red line, minimized logging, and installed culverts in advance to ensure seawater could seep into construction areas and promote mangrove growth. The forests were as lush as ever after construction was completed.

The SGR is an important early harvest under the 10 cooperation plans announced by President Xi Jinping at the Johannesburg summit of the Forum on China-Africa Cooperation (FOCAC). It is also a flagship project of Sino-African cooperation on railways, highways, regional air networks and industrialization as well as industrial capacity.

The first train from Mombasa arrives at Nairobi Terminus in Nairobi, capital of Kenya, May 31, 2017.

Since the launch of the SGR, the Chinese company has offered Kenyan employees training tailored to their specific backgrounds, trades and roles. It is committed to transferring Chinese rail technologies, selecting talent in Kenya and building a talent pool for Kenya’s rail industry. Almost 80 percent of employees are hired locally. On the 1,000th day of operation of the SGR, the head of the Africa Star Railway Operations Co., Ltd. announced that the technology transfer has been carried out through 123 types of skilled work, marking an effective transfer throughout the industrial chain. Kenya has thus been provided with technologies and capacities to develop rail transport independently. There are 2,525 Kenyan employees and 676 Chinese employees working for the SGR. Kenyan employees began to work independently in key skilled positions. At present, 1,072 Kenyan employees are capable of performing 58 types of tasks on their own. The neat and graceful flight attendants trained to Chinese standards have become a beautiful sight of the SGR. The Qualified Personnel Training for SGR is an overseas training program of the Chinese railway industry with the longest duration, the largest number of trainees, and the most distinctive professional characteristics. The program covers more than 10 types of skilled work in fields such as railway locomotive (internal combustion), railway signaling and railway transport.

As early as 1421, Chinese navigator Zheng He of the Ming Dynasty (1368-1644) arrived in Mombasa on the East African coast, marking a glorious chapter in the ancient Silk Sea Route. Almost 600 years later, the SGR, Friendship Express Train, renews the history of China-Africa friendship and is heading for a bright and promising future.