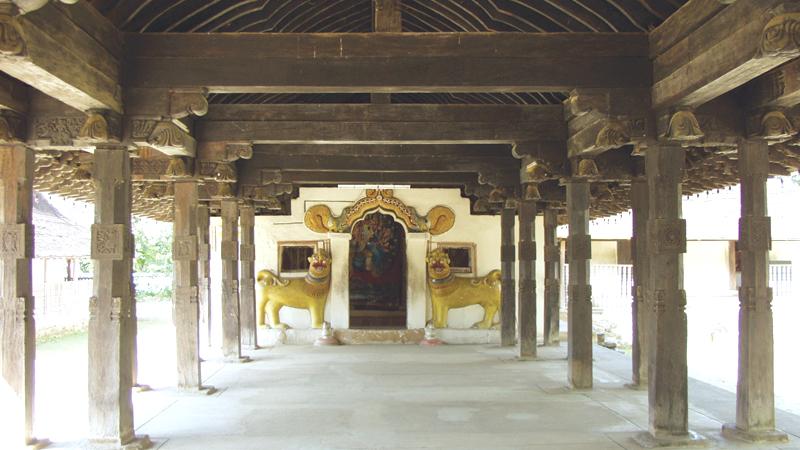 It wasn’t until years later, while I was in school, that I discovered that there was a lot more to see off the beaten path on the Kandy Road than what I did. had never been exposed. One of the most magical and beautifully designed places in the middle of the hinterland was Embekke Devale.

Calm and serene, I found the temple floor full of peace and beauty. I couldn’t believe that most of the locals had never visited this place, which has now become an important historic site of UNESCO. The location was five miles from the Peradeniya Botanical Garden and was never on my childhood traveler’s list of places to visit. This rustic temple is a must visit for anyone, especially if you are a history buff or a fan of exquisite architectural design. UNESCO has identified the wooden carvings on the pillars as the most beautiful that can be found in any part of the world.

My family and I would take a short trip to Kandy from time to time and spend many mornings visiting the three temples along the way. The three unique temples, Gadaladeniya, Lankatilaka and Embekke, were within a few kilometers of each other, just outside of Kandy. The best known and my favorite was Embekke because of the woodwork.

It was common to see groups of local students visiting the site. I always wondered why my friends from Colombo never came here on a trip. Maybe they never even knew this magical place existed. However, given the Covid-19 pandemic, there were fewer people at the temple in March of this year when we visited the Embekke Devale.

The Embekke temple was built in the 14th century as an audience hall for the kings of Gampola, a town near Kandy. Later, the hall was converted into a temple dedicated to the deity Kataragama, where locals came to make wishes and requests.

According to ancient documents and the epic Embekke Varnanawa, the Devale was built during the Gampola period of King Vickramabahu III (1371 AD). The story goes that one of the king’s beautiful wives, Henakanda Biso Bandara, together with a drummer named Rangama, had a miraculous dream in which he built this devale dedicated to the deity Kataragama in a three-story building today ‘hui nonexistent. . The Devale was constructed in two segmented buildings, the Digge (dance hall) and the Drummers Hall (Hewasi Mandappaya).

The temple is famous for its many intricately carved pillars depicting majestic birds such as eagles and swans. Each pillar has its own sculpture. In addition to the wildlife carvings, some pillars are carved with wrestling men, dancing women, and other human subjects. The load-bearing wooden pillars have taken on various shapes molded into these intricate wood carvings. The lower square is octagonal in shape, with carvings, while its top is expressed in a leaf emanating from the square.

Embekke Devale, nestled in Udu Nuwara, is near Daulagala, about 8 miles from Kandy. Embekke Devale is the finest example of Sri Lankan architecture and art presented in wood. Almost every inch of the wooden structure is decorated with elaborate and intricate carvings on rafters, beam columns, brackets, doors, doors and windows. Nothing was spared.

The sculptures include 125 sets of decorations, 256 liyawel, 64 lotus designs on Pekada (supports) and 30 decorative designs on wooden roof beams, for a total of 514 fabulous sculptures.

My favorite masterpieces on these amazing wooden pillars include the two-headed eagles Hansa Puttuwa (intertwined swans) and interwoven string patterns, the mother nursing her child, the soldier fighting on horseback, dancing female figures, wrestlers, an elephant-bull combination and the elephant-lion fusion.

The best examples of Sinhala art

The building on the temple floor called Drummers Hall has some of the most intricate carvings on the columns. Some sculptures at the entrance to the hall, known as Vahalkada, are among the best examples of Sinhala art in Sri Lanka. Some ancient stories claim that some of the beautiful woodwork in the Drummers Hall was originally found in the abandoned Royal Audience Hall at Gampola.

There are other stories about how all the different Sinhala Buddhist kings repaired the temple dedicated to the Hindu god Kataragama.

The roof of Drummers Hall has some important features. The rafters are all sloped from the top to the middle and are secured together and held in position by a Madol Kurupawa, a kind of giant pin, which holds together 26 rafters at the hipped end of the Digge roof of the Embekke Devale. The Madol Kurupawa is one of the finest examples of the excellence of medieval carpentry. This kind of spectacular architecture is very rare. I have always been grateful that I discovered this well-kept secret at a young age so that I could share this wonderful place with my family and friends.

A quiet and decisive election in the county | News, Sports, Jobs