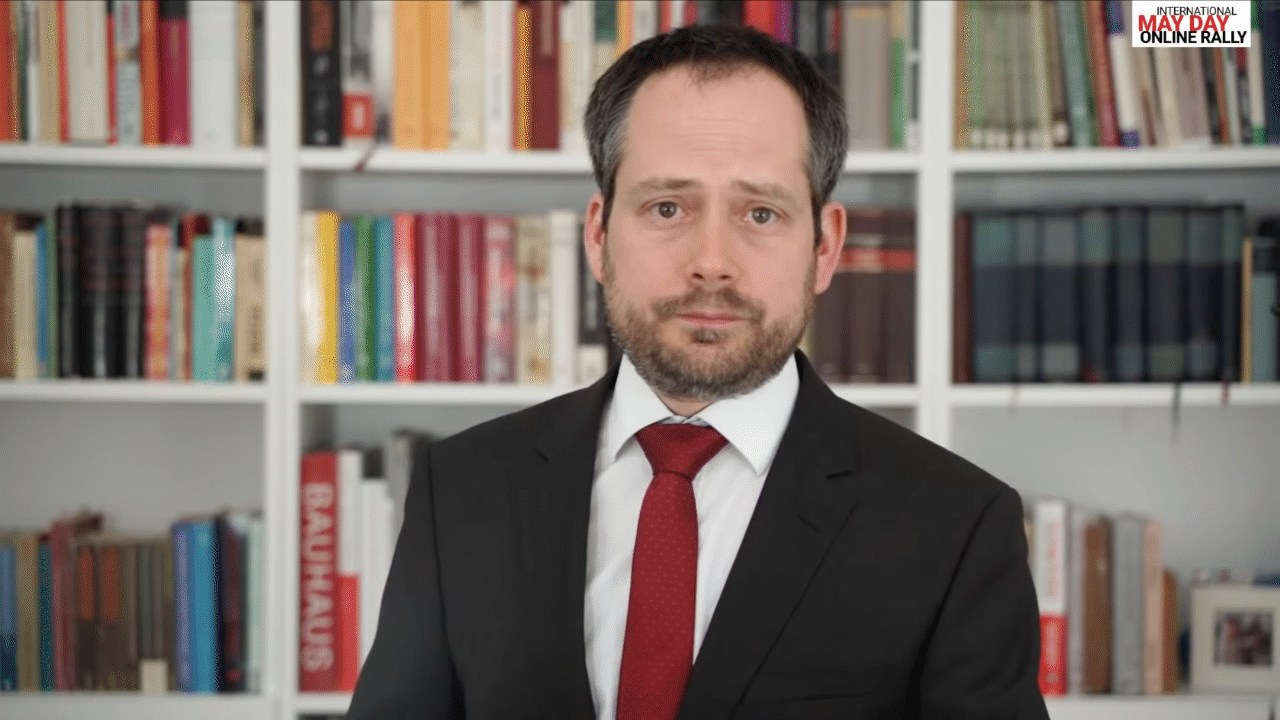 The revival of German militarism and the struggle for socialism

These remarks were made by Christoph Vandrier at the seventh national congress of the Socialist Equality Party (US), which was held from July 31 to August 5, 2022.

Vandrier is the national secretary of the Sozialistische Gleichheitspartei (SGP), the German section of the International Committee of the Fourth International.

Read the full report on the Congress and the resolutions adopted during it.

The fact that the Congress is dedicated to our unforgettable comrade Wije Dias testifies to this perspective. As Comrade David North noted, Wije’s life represents the historical depth of our world party. Starting from the fight against the betrayal of the LSSP, the RCL/SEP has based its work on the historical and political principles of the International Committee. This can be seen in the extremely strong declaration of the Sri Lankan comrades intervening in the explosive situation and giving leadership to the working class on the basis of these principles.

This is the essence of what we have called the fifth phase of the development of the Trotskyist movement. Our historical principles intersect with the growing class struggle internationally. And as comrade David North said, the more class struggles break out, the more important it is to base our party on our historical heritage.

Each Extremely Strong Resolutions report has shown how we base our analysis on exactly that legacy, a very fundamental understanding of our time and analysis spanning decades. All the central issues that we have been discussing in recent days are fundamental characteristics of the development of all countries in the world.

When it comes to the pandemic, Germany is a BA.5 wave hotspot. Infection, hospitalization and death rates are rising rapidly, clinics are at their absolute limit as thousands of doctors and nurses are down due to infection. Even Health Minister Karl Lauterbach warns of a catastrophic collapse and development, but at the same time threw all protective measures overboard. The government pursues a deliberate policy of mass social murder and destruction of the public health system.

While millions of workers are threatened with death and disease in order to increase the profits of banks and companies, radical reductions in real wages are organized with inflation. The same nurses who fought two and a half years on the front lines of the pandemic are now getting 10-20% pay cuts!

All social spheres are henceforth subordinated to the war against Russia. In Germany, natural gas prices have tripled. And now the government has also passed a law introducing an additional levy to protect the profits of energy companies. The workers must be forced to freeze so that they can wage war against Russia.

Under these conditions, the campaign of comrade Will Lehman also arouses great interest among the German workers. This is because the trade unions have fully supported the war policy and are imposing the wage cuts and price increases against the workers. With the war against Russia, the “German Labor Front” also returns.

In point 15 of the resolution against the imperialist war, we declare: “The conflict with Ukraine has provided German imperialism with the opportunity to carry out the greatest campaign of rearmament since the collapse of the Nazi regime.

It is very true. Seventy-seven years after the unconditional surrender of the Wehrmacht, German tanks roll against Russia again. By tripling the military budget, the ruling class in Germany is pursuing the stated goal of once again building Europe’s greatest military power. All restrictions imposed on Germany after the greatest crimes in human history are removed and the whole society is militarized.

The same arms companies that supplied the whole war and made their profits through forced labor and in the concentration camps are once again multiplying their production and mass manufacturing weapons for the war against Russia. After the German government has already delivered weapons worth 600 million euros to Ukraine so far, 100 more self-propelled howitzers worth 1.7 billion euros are now to be sent.

We had already shown in 2014 how this return of German militarism goes hand in hand with the trivialization and ultimately the justification of the crimes of German imperialism. This has been more than confirmed. The falsifications of history by Professors Münkler and Baberowski, which we have denounced and fought, are today the official line of the government.

For example, the Social Democratic Chancellor Olaf Scholz called the Russian invasion of Ukraine a war of extermination and the breaking of civilisation, terms which until now had been used in Germany exclusively for the campaign in the East and the Holocaust. To use these terms for the war in Ukraine is an incredible trivialization of Nazi crimes. The daily taz even claimed in an article that Stalin planned World War II even before Hitler came to power. The old Nazi lie of a preventive war and therefore of the justification of the war of extermination is revived today in the newspaper of the Greens.

With our struggle against this falsification of history, we have linked ourselves to the historically deeply rooted opposition to the war in the German working class. This was possible only on the basis of the decades-long struggle of the International Committee for the defense of historical truth and the struggle against subjective idealist ideology. On this basis, the SGP is today the only party in Germany that opposes militarism and arms the working class with a socialist perspective. As Johannes pointed out yesterday, the Greens are today the most aggressive pro-war party and the left-wing party and its pseudo-left satellites also support the war against Russia.

As the comrades have already explained, the same applies to all central questions of political development. Our World Party is the only political trend that has a progressive response to war, mass social murder in the pandemic and the danger of fascism.

This is also the reason why the German state is waging its furious campaign against us under the banner of anti-communism. “The Verfassungsschutzthe German secret service, make it clear that they regard the SGP and the ICFI as the standard-bearers of contemporary Marxist socialism”, as Comrade David North said in his opening report to the summer school of the SEP (US) in 2019. They put us on the list of extremist organizations because they understood that our program had the greatest objective significance.

The government justified explicitly naming the SGP because we campaigned against nationalism and militarism and advocated for an egalitarian, democratic and socialist society. He developed an argument declaring unconstitutional and illegal any criticism of state organs, and in particular of the army and the secret services. Two courts have since blessed this outrageous Nazi revival Gesinnungsjustizthat is why we have now filed a constitutional complaint.

Our complaint is not a defensive act and is certainly not based on illusions within the Federal Constitutional Court. On the contrary, with our complaint, we go on the offensive and put the Verfassungsschutz on trial. We put ourselves at the forefront of the fight against the radical right-wing conspiracy in the state apparatus and the return of fascist methods.

The ruling class is turning to authoritarian and fascist forms of government all over the world because its policies of war and social attack are meeting with enormous opposition in the working class. The fight against fascism is therefore inseparable from the fight against war, the pandemic and social attacks. The only way to defend democratic rights is to mobilize the international working class on the basis of a socialist program.

This perspective is now very concrete. The class struggle is developing rapidly and the interventions of our party are of the highest objective importance. These interventions must be based on our living historical principles and experiences in order to harness the objective power of the working class. This congress is undoubtedly an essential step in this direction.

Paladin, where are you going?