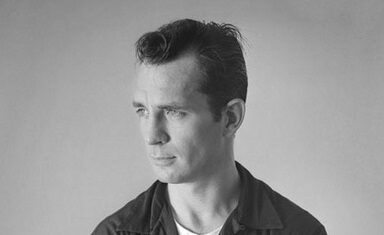 The Road Ended Where It Began for ‘Father of the Beats’

LOWELL – Whether or not they’ve read his books, a must-stop for many visitors to this city is the final resting place of writer Jack Kerouac, one of America’s most famous travelers.

The grave is near the gatehouse of Edson Cemetery. At lot 76, row 96, grave 1. So many visitors looked for it that the caretaker printed out a map with directions.

The simple slab on the grass bears his name, birth and death dates. March 12, 1922. October 21, 1969. His life began several years before America’s Great Depression. It ended when the US President was Richard Nixon. The tribute on the gray stone is in capital letters: “HE HONORED LIFE”.

A larger memorial stone added long after his funeral, located behind the grave, contains a quote from his most famous book, On the road. The quote is “The road is life.”

There are often handwritten notes and pens, or open bottles of Jack Daniels whiskey or half-empty wine bottles placed on the grave. They are appropriate since biographers agree that the writer was an alcoholic. His lifelong affinity for cheap wine gave way to his oldest favourite: the “boilermakers”: shots of whiskey and small beers that led to the alcoholism that caused his untimely death at the age of 47 years.

Only Kerouac’s books would have made him famous. A remarkable feat since the French Canadian spoke only French until the age of seven or eight. His book On the road is consistently ranked in the top ten of American novels, the top 50, or the top 100, depending on which list you believe.

“TI JEAN” or “Little John” was Kerouac’s family nickname. Legend has it that visitors to the tomb include multiple escapades of Pulitzer Prize-winning folk singer Bob Dylan, known for his own famous lyrics.

Kerouac had an influence far beyond literature

But it wasn’t just the admiration of songwriters like Dylan that led to his fame. He was influential not only in literature but also in film (Francis Ford Coppola), music (The Doors), politics (Barack Obama) and even fashion. The latter was illustrated under the name Dior Homme, under the creative direction of Kim Jones, who recently offered a collection honoring the Beat generation created by Kerouac during its Fall 2022 show last December. In 1993, The Gap featured Kerouac in an advertisement for its khaki pants.

Kerouac grew up in Lowell and was buried there. Curiously, he was hardly praised in his hometown during his lifetime, largely due to his bohemian lifestyle, generally rebellious nature, bisexual activities, and excessive drug and alcohol use. . But today, one could easily argue that he is Lowell’s most famous figure of the 20e century.

And visitors are expected here from all over the world this year during the 100e anniversary of his birth in this faded industrial city of about 116,000 people, located less than 35 miles from Boston.

The year-long celebration ran throughout 2022. October will feature a weekend of Kerouac-themed events and tours, including a walking tour of historic sites often featured in his books.

For years, Kerouac was frequently on the move: New York, California, Lowell and Florida. He spent time in Mexico and Morocco and had a brief stay in Paris. His wandering also led him to seek faith not only in his way of life, but in religion. He started as an altar boy and a Roman Catholic, became an atheist, then a Buddhist, then a Buddhist-Christian. And finally, a straight Christian.

Even at an early age and years before his stardom, Kerouac was a jazz lover who lived by his own beat. While at Columbia University in New York, where he met other “Beat” personalities like Allen Ginsberg, he often felt like an outsider. Like “Lil’ Abner in the big city of New York”, as he put it.

His reconciliation of the Buddhist principle of reincarnation with Christianity’s heaven and hell afterlife is what drew retired Universalist minister Steve Edington to him years ago.

Edington has been president and a 30-year member of the Lowell Celebrates Kerouac Committee. He leads tours of sites described in the books. He also leads tours in nearby Nashua, New Hampshire, where Edington was a minister. It was also the home of Kerouac’s parents, Leo and Gabrielle, who met and married in Nashua before moving to Lowell.

Kerouac has often referred to his writing style as “spontaneous prose”. Although it was written supposedly without edits, he primarily wrote autobiographical novels based on actual events in his life and the people he interacted with. His his insistence on “first thought, best thought” and his refusal to revise were controversial.

He typed “On the road” onto a 120-foot continuous roll of tracing paper in just three weeks, although he made some text revisions before publication six years later. Kerouac also resented all critics such as novelist Truman Capote, who said his work was “not written but typed”.

“It was a cruel remark and quite typical of the reception he received from the literary community. I believe Kerouac knew about it,” said Edington, who is also the book’s author. Kerouac Nashua Connection of his parents’ time there before they moved to Lowell.

Kerouac has often been called “Father of the Beats” or “King the Beats”. Jean-Louis Lebris de Kerouac (his real name) certainly paved the way for the hippie movement in the 1960s. But he didn’t like the designation. And that was just one way for Kerouac to see himself as often misunderstood. When a TV reporter asked him about coining the word “beatnik”, he denied it. He said instead: “I am a Catholic. He coined the term “beatnik” in 1948, but considered that to be misunderstood as well. It was not a reference to guitar and bongo playing hippies, but had a religious connotation, meaning “blessed”.

Other sites of interest

Edington says the author’s grave and his home at 9 Lupine Street in Lowell are the two pillars most visitors want to see. The house is a private residence and there are no visits. But another center of common interest is the district of Beaulieu and Boisvert streets, described in the novel Visions of Gerard. It was a reference to Kerouac’s older brother Gerard, who died of rheumatic fever at the age of nine when Jack was four. The writer idealized his brother and later said Gerard followed him through life like a guardian angel.

Yet another sector of interest: The Archambault Funeral Home. This is where Kerouac’s funeral wake took place. And the former Saint-Jean-Baptiste Church, where he was an altar boy, and now a possible site for a Kerouac center project that is in its early fundraising days.

The writer spent the last six years of his life in St. Petersburg, Florida, where acquaintances said he often enjoyed his anonymity. Few of his drinking buddies knew he was a writer. He hung out at a dive bar called “The Flamingo”. This is where Kerouac is said to have had his last drink before being taken to hospital the next day for internal bleeding. For years, the bar, now known as “Flamingo Sports Bar”, offered Jack’s drink for $2.50. It was called the “Jack Kerouac Special”.

Why was Kerouac an alcoholic? “It ran in his family,” Edington said. “My research showed that his father and grandfather died prematurely, not because of alcohol, but it was a contributing factor. Maybe it was a genetic factor. But creative people often seem have this craving (for alcoholism) running through them.

On his tours, visitors range in age from twenty to retirees of Edington age and up. Why did the Beat writer attract such a diverse group? Edington, during his ministry in Nashua, gave sermons on the various religious aspects of the writer, despite his sometimes amoral conduct. “He spent his whole life trying to figure out who he was,” he explained. “The idea of ​​breaking up and struggling with ‘who I am and what I’m doing here’ has an identity with different generations.”

The weirdest islands to add to an island-hopping odyssey