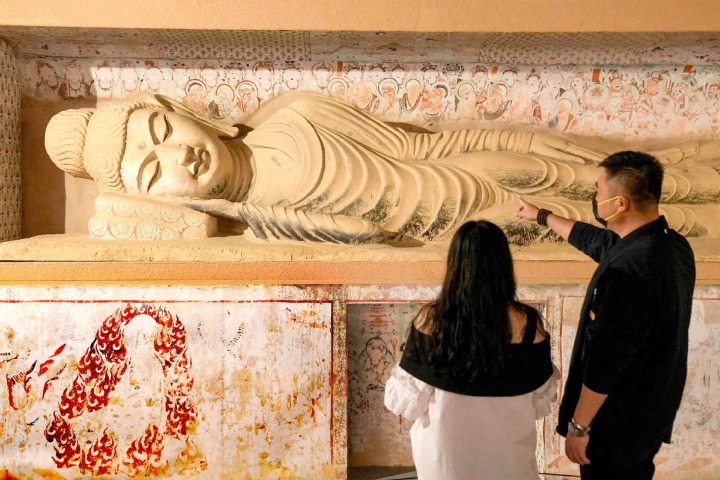 The successes of the heritage sector are generating enthusiasm for more

The past decade has witnessed a booming scenario for cultural heritage work in China, and Xi Jinping’s report presented on Sunday in Beijing at the 20th National Congress of the Communist Party of China gives stronger impetus to heritage administrators. of the country to uphold the spirit of intercultural communication in their work.

The report pledged to make greater efforts in protecting cultural heritage and expanding the reach and appeal of Chinese civilization.

Cheng Liang, head of the Gansu Provincial Bureau of Cultural Heritage, said that based on its resources and characteristics, the province will fully showcase the value of cultural relics and cultural heritage. It will also attempt to make Dunhuang Academy – the institute that oversees the Mogao Grottoes, a UNESCO World Heritage Site in Dunhuang – an example to the world of cultural heritage protection and a vital place for Dunhuang studies.

In August 2019, when Dunhuang was President Xi’s first stop during his visit to Gansu Province, he stressed the importance of better protecting the Mogao Grottoes and strengthening Dunhuang Studies to promote the inclusive spirit. they stood for and to consolidate people’s cultural confidence.

The Mogao Grottoes, a group of hundreds of Buddhist caves dating from the 4th to 14th centuries and featuring exquisite murals and statues, are often seen as a symbol of exchange and mutual learning between various civilizations.

The Hexi Corridor, where the Mogao Grottoes are located, is the main artery of the ancient Silk Road and remains a key example of cross-cultural communication.

“We will build a national cultural heritage road along the corridor and improve our research on the origin and formation of Chinese civilization,” Cheng said.

“By taking advantage of the culture of Dunhuang and the Silk Road, we will promote cooperation and communication among various cultures and tell the beautiful story of Gansu to the world,” he added.

The ancient communication routes linking China to the rest of the world not only passed by land, but also crossed the seas.

According to Fu Qisheng, head of the Fujian Provincial Bureau of Cultural Heritage, Fujian will step up research efforts on the Maritime Silk Road, an ancient trade route beginning in China and linking Asia, Europe and Africa, and will unveil Fujian’s participation in communication and exchanges between different civilizations.

The Song (960-1279) and Yuan (1271-1368) dynasties witnessed a peak of ancient Chinese maritime trade. Quanzhou, a city in Fujian that was once a trading center, was added to UNESCO’s World Heritage List last year as “Quanzhou: Emporium of the World in Song-Yuan China.” .

In May, at a group study session of the Political Bureau of the CPC Central Committee, Xi also stressed the importance of a national research program devoted to researching the origins of Chinese civilization.

According to Liu Runmin, head of the Shanxi Provincial Bureau of Cultural Heritage, Shanxi has participated in the program’s archaeological research.

The work includes archaeological work at the Taosi site, a Neolithic site dating back approximately 4,300 years. It is generally believed to have been the political center during the reign of the legendary ruler Yao.

Shanxi has a large number of cultural relics and ancient architecture. They are loosely distributed, posing challenges to protection efforts. According to Liu, priority has been given to the protection of relics, and people working in this field are reminded to fulfill their duty to protect relics.

“By exploring the thoughts hidden in relics in a modern context, we can present excellent exhibits and thus deepen mutual understanding of different civilizations,” Liu said.

Wen Dayan, director of the international cooperation department of the National Cultural Heritage Administration, said cultural relics can help better tell Chinese stories abroad and connect China with the rest of the world.

Other joint projects with other countries on archaeology, conservation of endangered cultural heritage sites and cooperative exhibitions will be launched by China, Wen said. He promised that China would contribute to a more balanced and rational international order for repatriating lost relics.