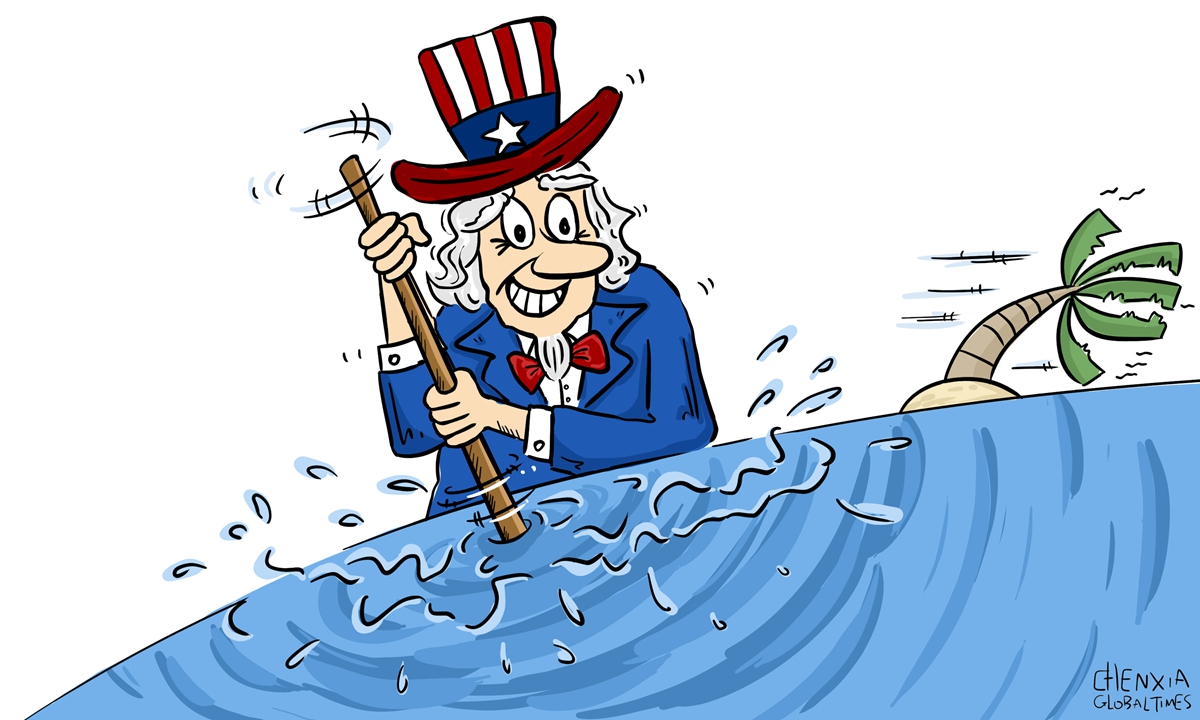 In recent years, hegemonism has not been weakened in the field of maritime security. On the contrary, he got stronger and stronger. Relying on its maritime military might, the United States frequently conducts freedom of navigation operations in the waters of other countries with its warships.

At the same time, Washington is trying to implement the so-called rules-based free and open maritime order designed on the basis of its hegemonic advantages. It also uses its advantage of global discourse to stigmatize China’s maritime operations and highlight ideological competition.

In addition, the United States is also trying to consolidate and improve its regional alliance partnerships, thereby enhancing its ability to contain China. However, American maritime hegemonism will lead to problems such as disorderly competition between the great powers, turbulence in the region, the degradation of multilateralism and the failure of institutional governance. Therefore, we must maintain the maritime governance framework within the framework of multilateralism and oppose maritime hegemonism.

First, it involves opposing the use of military superiority to be flamboyant in the waters of other countries. In recent years, the frequency of US warships and military aircraft entering the South China Sea (SCS) has increased dramatically. Equally serious is the fact that some ships sail under the guise of science expeditions to bolster military recognition in the SCS. This increases the risk of conflict. Since Joe Biden took office as President of the United States, the intensity of military operations in the SCS has steadily increased.

US warships also conducted so-called freedom of navigation operations alternately in the waters of Nansha and Xisha, frequently crossing the Taiwan Strait. The United States also conducts various military exercises in the SCS to improve interoperability between ships, military aircraft, and other weapons. The United States is not requesting the SCS. That being said, its military actions in the SCS demonstrate that its ambition is to contain China. The frequent entry of US military forces into the SCS can easily lead to military errors of judgment between the two great powers. This naturally increases the risks to regional security and endangers regional peace and stability.

Second, to oppose the creation of “rules and orders” consistent with the rights and interests of unilateral hegemony. In recent years, US politicians, think tanks, and some academics have frequently used the “rules-based free and open maritime order” to put pressure on China. They are simply trying to restrain China’s actions with the rules and order set by the United States. In fact, the so-called rules-based free and open maritime order is just one manifestation of American institutional hegemonism.

Third, to oppose the stigmatization of ideologies and behaviors. The Trump administration has intervened with the SCS by stigmatizing Chinese ideology in the maritime sector as an important means. This was inherited by the Biden administration. Regardless of the administration, the United States still hides its strategic intention to contain China under the rhetoric of ideological discourse, portraying China’s maritime operations as a challenge based on values ​​and standards. The United States has branded China as autocratic in the SCS. He slandered the Chinese Communist Party by saying that he coerced other applicants into the SCS. He used ideological vocabulary to attack China’s actions, including an ideological narrative that involves more allies and partnerships to contain China.

Fourth, oppose the establishment of military alliances against other countries. In recent years, the United States has actively built a maritime security alliance in the Indo-Pacific region. The Quad, AUKUS and Five Eyes Alliance countries have all become important helpers for the United States to intervene in the SCS. These quasi-military alliances view China as an imaginary enemy and explicitly or implicitly view China’s containment as a common goal in military exercises and joint declarations. The alliance is a product of the Cold War mentality. This can only increase the insecurity of the adversary and will ultimately lead to a security dilemma between the two great powers.

History has proven time and time again that maritime hegemony can only lead to wars and conflicts. Since the great geographic discovery of Western countries at the end of the 15th century, the ocean covering 71% of the earth’s surface has become one of the most important arenas of power struggles. Countries that practice maritime hegemony have emerged in turn, trying to build maritime security and trade order on the basis of their strength and unilateral interests, creating countless “human tragedies” of slavery and corruption. fight against slavery, oppression and anti-oppression, colonization and anti-colonization. . The governance of maritime security in the new era must abandon hegemonic thinking and build an order in accordance with the majority of the interests of humanity within the framework of multilateralism.

The author is an assistant researcher at the Maritime Silk Road Research Center of the National Institute of South China Sea Studies. [email protected]

Flood warning after heavy rains in Chennai; congestion in parts of the city