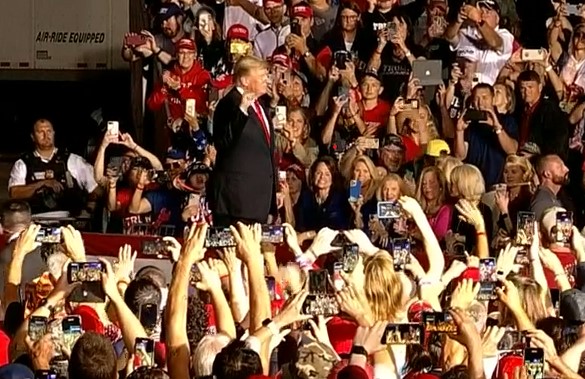 Former President Donald Trump ruminated on election fraud and Democrat wrongdoing on Saturday while teasing a possible race in 2024 at a rally in Des Moines.

Trump warmly greeted the people of Iowa, congratulating the Hawkeyes on their victory over Penn State. He touted his victory in Iowa in 2020 and his last Des Moines Register / Iowa Poll Numbers.

â€œAs dire as the Biden administration has been, no one can blame the great state of Iowa because my boy, we’ve been doing really, really well here,â€ he said.

Saturday was Trump’s first visit to Iowa since before the 2020 election. Although he did not announce his candidacy for 2024, Trump gave a campaign speech, denouncing President Joe Biden and highlighting his own success. in power. He joked with the audience about a potential new slogan: â€œMake America Great Again, again. “

Throughout his speech on Saturday, Trump continued to claim he won the 2020 election, noting that he “never conceded.”

â€œRemember, this is not about stealing an election from me,â€ he said. “This is about the American people being taken from their country.”

He spoke in detail about specific grievances with specific states, arguing that widespread fraud had occurred to prevent him from taking office. To date, there has been no evidence of large-scale election fraud and several court cases on the issue have been dismissed.

Even so, Trump noted that he received the “biggest cheers” when he spoke of voter fraud. He called for a complete overhaul of the electoral system “to ensure that it is free, fair, honest and that it can be fully and quickly audited”.

Another common thread of the speech was that Biden had canceled the success of his administration. â€œIf Biden had just gone to the beach,â€ Trump joked, the southern border would have remained secure.

He pointed out that crime was a growing problem in the United States, alleging that other countries were intentionally bringing criminals into the country and that there were “bloodthirsty gangs” roaming the streets.

As for politics, Trump lingered on a Democrat-led spending bill that would include a wide range of Biden’s priorities, like a free community college and a child tax credit.

â€œWe cannot allow America to become a socialist country. That’s what they do, â€he said. “And I really think it’s a step beyond that, to be a communist country.”

Trump has also spent much of the speech on Biden’s withdrawal from Afghanistan, focusing on the decision to leave equipment behind.

“We should have taken everything,” he said. “Most importantly, we shouldn’t have lost 13 warriors.”

He said the pullout was “the most embarrassing event in American history.”

The vast majority of Trump’s nearly two-hour speech focused on criticizing the Biden administration, praising his own record and claiming electoral fraud, but Trump also repeatedly told the crowd to vote against the Democrats next November.

“Virtually all Democratic lawmakers in the House and Senate have approved this deranged legislation,” Trump said, referring to the spending bill. “And that is why each of them must be removed from their posts next November.”

Trump backed US Senator Chuck Grassley in his bid for re-election, calling the 88-year-old young, strong and “very handsome.”

â€œIf I didn’t accept the approval of someone who has 91% of the Republican voters in Iowa, I wouldn’t be too smart,â€ Grassley said. “I am smart enough to accept this approval.”

Democrats in Iowa criticized Grassley and other Republicans for lining up with Trump even after the Jan.6 uprising on Capitol Hill.

“Republicans in Iowa have linked themselves to a man who attacked the foundations of our democracy throughout his tenure,” Iowa Democratic Party Chairman Ross Wilburn said in a statement.

Trump has said he plans to support Gov. Kim Reynolds as well, but won’t officially do so on Saturday at his request in order to keep the spotlight on Grassley.