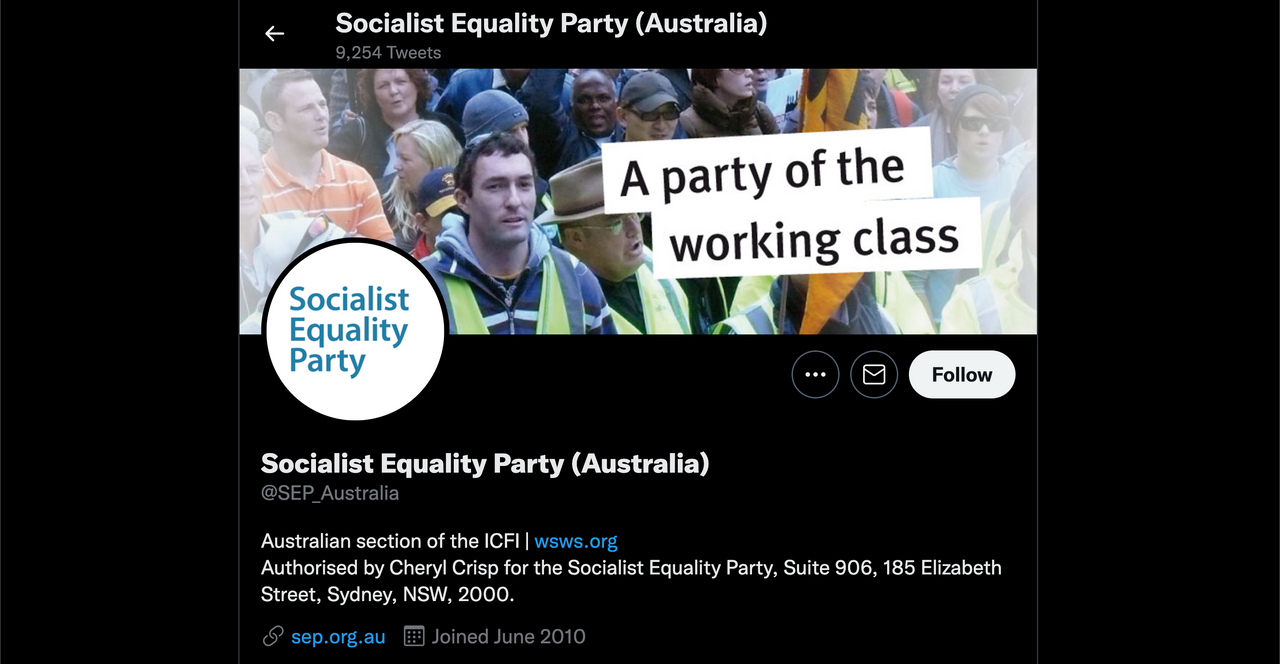 Late last night, Twitter lifted the lock on the Socialist Equality Party (Australia) account which had effectively deactivated it from July 21. The account has been fully reinstated, with all functionality previously denied to it, including posting, retweeting, replying to posts and commenting on other users’ posts, restored.

In an email, Twitter said, “Our support team has reviewed your account and it appears we’ve made an error. We have determined that there was no violation and have restored your account to full functionality. We sincerely apologize for any inconvenience and thank you for taking the time to submit your appeal request to us.

The social media company contradicted itself, with the automated message informing the SEP of the reinstatement on Twitter itself stating, “Thank you for addressing the issue. Your account is now available for use. To avoid future lockouts or account suspensions, please review the Twitter Rules and help us maintain a safe environment for everyone on Twitter.

As clear as mud!

Twitter’s reversal is nonetheless a welcome development, undermining a precedent of broader attacks on left-wing, anti-war and socialist material on the internet.

The lockdown had ended a significant component of the public presence of the SEP, a political party with a history spanning 50 years. This has limited the SEP’s ability to intervene in growing Twitter discussions about war, COVID “let it rip” policies and a broader attack on democratic rights.

The targeting of an organization opposing these policies of the ruling class and advancing a socialist, revolutionary and internationalist alternative for the working class was undeniable political censorship.

This conclusion is supported by the fact that Twitter has provided no explanation for its actions. In effect, this means that the SEP’s analysis of the politically motivated nature of the lockdown is valid, as it has not been contradicted by the social media company and no other plausible explanation has been offered.

The timing and character of the action demonstrates that it was not the result of a single “mistake” or glitch in one of the social media company’s many opaque and mysterious algorithms, themselves designed and implemented by Twitter administrators.

The lockdown was imposed on the morning of July 21 Australian time. The measure was originally to be limited to 12 hours and no reason or avenue of appeal was provided.

A video posted by the SEP account minutes before the lockdown was lifted and replaced with a message claiming he broke unspecified rules.

When the first 12 hours passed, the lockdown was extended. A message was sent by Twitter, demanding the removal of the video and claiming that it violated prohibitions on “posting or sharing intimate media produced/distributed privately of someone without their express consent”.

This statement was as bizarre as it was false. There was nothing in the 59-second video that could be remotely described as matching the description provided by Twitter.

Whatever the role of algorithms, the timeline shows that Twitter administrators dodged and sat on the call, while making serious accusations against a long-standing and well-known political party. Even a cursory viewing of the video, which would have taken less than a minute, would have shown that it broke no rules.

Highlighting other issues of concern, the fact that on Monday morning another Twitter user posted the same video, with an identical caption to that which had been used by the SEP. The post has not been removed or disrupted in any way, indicating that the content of the video alone did not trigger any automated algorithmic error.

As many opponents of the lockdown have noted, it was ironic and striking that the video targeted by Twitter for censorship focused on significant attacks on free speech.

The video was part of the SEP’s campaign in defense of Dr. David Berger. He has been threatened with disbarment by the Australian Health Practitioners Regulatory Agency (AHPRA) and instructed to complete a special ‘education’ course if he wishes to remain a doctor.

Berger’s “crime” is vocally opposing the “let it rip” COVID policies adopted by governments around the world and in Australia, and advocating for the science-based measures needed to eliminate transmission and end pandemic.

The attack on Berger comes as all Australian governments, led by the Federal Labor Administration, waive the latest nominal security measures. They are implementing this under the conditions of the worst surge of the virus to date, which now frequently claims more than a hundred deaths a day, more than double the level a month ago.

The video linked the attacks on Berger to the persecution of other Zero-COVID activists. Among them was Lisa Diaz, a British mother facing prosecution for removing her immunocompromised children from a COVID-infested school, and who staged a powerful parents’ strike. Another was David O’Sullivan, a London bus driver sacked for campaigning against “herd immunity” policies that had killed dozens of his colleagues.

Finally, the video raised the case of Julian Assange, the publisher of WikiLeaks who was hunted down and persecuted for 12 years because he exposed US-directed war crimes in Iraq and Afghanistan. Assange has been targeted by the major imperialist powers and their intelligence agencies with more intensity and persistence than anyone in recent decades.

It is clear then that the video was not only highly political. It raised, in an engaging visual medium, issues that cut across and opposed some of the key policies of capitalist governments and their state apparatuses, including in Australia and the United States, where Twitter is headquartered.

It is common knowledge that intelligence agencies spend a lot of time monitoring and intervening on social media. One of their goals is to try to prevent leftist and opposition content, often in the form of videos and visual media, from going “viral” amid widespread and growing social anger and a re-emergence of the workers’ struggle.

Twitter ended its lockdown on the SEP page, only after a protracted campaign by the party and its supporters, which won widespread support. The tweets demanding an end to the lockdown have been liked thousands of times and shared by the hundreds.

This campaign, and the response to it, shows the way forward in the fight for democratic rights and against online censorship. Fundamental civil liberties, everywhere under attack, can only be defended by the mobilization of the working class, the only social force committed to democracy, with young people and the principled strata of the middle class.

The Road Ended Where It Began for ‘Father of the Beats’