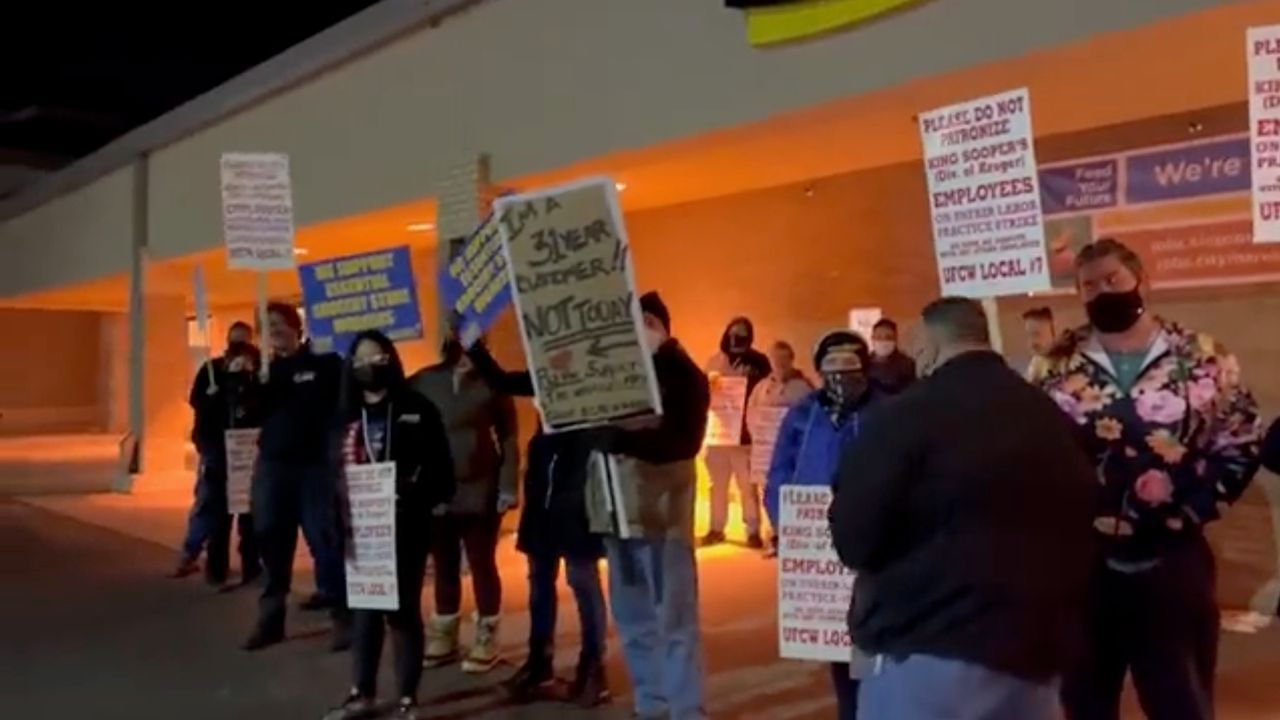 Are you a King Soopers employee? Contact the World Socialist Website today to discuss your reaction to the end of the strike and the way forward for grocery store workers.

In a blatant sell-out, United Food and Commercial Workers (UFCW) Local 7 abruptly announced a tentative agreement with King Soopers early Friday morning and ended a 10-day strike by 8,000 workers in the Denver, Colorado area. The strikers were ordered to dismantle their pickets and contact their store managers to be put back on the work schedule. Workers will have seven days to report for work.

In a blatantly undemocratic procedure, workers at King Soopers were instructed to close the picket line and begin returning to work before they had seen a single word of the deal and before the union had even announced a timetable for a vote. It now looks like the vote will take place throughout the day on Monday, but workers won’t have a chance to review the contract before ratification meetings.

Many workers expressed their concern and suspicions on social media about the deal. “No, that doesn’t sound good at all,” said one worker. “We should still be on strike until we get to vote on the contract. I’m sorry I don’t trust [UFCW 7 President Kim Cordova] at present. And I don’t trust the company. Another said: “I will be back when the contract is officially voted on and ratified. I don’t trust companies or union bosses. I only trust my fellow workers!

The vote is being conducted in a way clearly designed not to convince workers to back the deal, but to intimidate them and present it as a done deal. Even the vote itself is designed to suppress voter turnout; two meetings are to be held at a hotel near the Denver airport more than an hour from downtown by public transit, and those who have returned to work will be required to request unpaid leave from management to attend the meeting.

In a “Frequently Asked Questions” flyer posted on its Facebook page, UFCW Local 7 described the voting process as nothing more than a formality. “Your vote is essential,” the union said dishonestly, “and we need you to come to hear the details and make your voice heard. For the agreement to take effect, the members will have to ratify the agreement. There was no indication of what, if anything, would happen if the workers voted against the contract; instead, the members’ vote is presented as “critical” only to the extent that they are voting to ratify the contract.

Workers should reject this deal, as a matter of principle, by the widest possible margin, and not agree to any deal without receiving a copy of the full contract and at least a week to review it. Moreover, they must demand the immediate resumption of the strike until all their demands have been satisfied.

“So there are no further meetings for this?” I know a lot of people who won’t be able to come,” said a worker. “I’ve already told my manager I’ll be back, I can’t tell him I’ve changed my mind [and] I won’t be back until Tuesday. It’s kind of messed up as we were supposed to call our store managers to go back on schedule so I did.

A worker who spoke to the WSWS said, “We are waiting for the details to come out on the new contract, then we can vote on it. We are all a little suspicious.

Another said: “That doesn’t sound good. we did not vote. If we stop striking before we vote, we lose ground with our loyal customers. I really think this will confuse the minds of the public into thinking that it is okay to shop at [King Soopers] again, before we even have an official contract.

The end of the King Soopers strike is just the latest in a series of betrayals by pro-corporate unions. Just a week ago, the Chicago Teachers Union ended a citywide industrial action in public schools, using virtually identical methods. CTU made a deal behind the teachers’ backs to send them back to schools, only to force them to vote on the deal after the fact and the schools had already been reopened. To cover their tracks, CTU President Jesse Sharkey claimed that the teachers were helpless in the face of the intransigence of the city’s Democratic administration. It was proven to be a lie days later by a growing wave of sick students and teachers across the country and around the world demanding that schools be closed.

While no details of the King Soopers deal have been made public, the circumstances of the announcement can only indicate that this is a sale that meets virtually all major management demands. News reports just hours before the deal was announced suggested negotiators were still a long way from a deal. The chairman of King Soopers was also reportedly defiant, spending only a few minutes at the negotiating table. Moreover, the company had just obtained a court injunction restricting picketing, a clear sign that it was in no mood to negotiate but intended to crush the strike.

If King Soopers management plays hardball, it’s because of the strength of the strike, not its weakness. The grocery chain was unable to hire enough scabs and was forced to bring in managers from out of state in an effort to keep their stores running. Additionally, the strike received huge support from workers in surrounding communities, who refused to cross the picket line to shop, causing the chain’s sales to slump.

But the biggest indication of potential support for the strike came at the end of the week when the wave of student walkouts reached metropolitan Denver, when students from multiple schools joined in protests to end to in-person learning. The school closure campaign is part of a growing international movement among the working class to oppose the subordination of public health policies to private profit and the reopening of schools to force parents back to work. .

This outpouring of support and potential support came despite attempts by the UFCW to limit and isolate the strike. He called off the strike in Colorado Springs without explanation shortly before its scheduled start and also unilaterally extended a contract at Safeway stores that was due to expire this month. Safeway workers in Denver say they have to work 14-hour days to meet growing demand from customers refusing to shop at King Soopers. One worker, criticizing the move, said on social media: “King [Soopers] went on strike, leaving Safeway employees who are under the same union status facing insanity. Their contracts are also up and you don’t hear about them nearly as much.

Particularly in the past year, an unmistakable pattern has opened up in which unions have responded to a growing wave of worker resistance not by bowing to popular pressure, but by acting more openly and treacherously to sabotage their struggles. This was the case during last year’s strikes at Volvo Trucks, John Deere and Kellogg’s, as well as potential strikes that were called off at the last minute at Kaiser Permanente and in the film industry. The reason is that unions have long since ceased to function as workers’ organizations and are pro-corporate bureaucracies controlling billions of dollars in assets that work hand-in-hand with management to enforce concessions.

As for the UFCW, they have been instrumental in keeping food processing plants open throughout the pandemic, even during a massive infection. Local 7’s inaction in the summer of 2020 in the face of a major outbreak at the nearby JBS beef plant in Greeley, Colorado claimed the lives of six workers, until workers finally took the things in hand and organize wild walkouts to shut down the factory. . At a hog plant in Waterloo, Iowa, UFCW responded to mass absenteeism during a major outbreak by working with management to create a perfect attendance bonus, even though the latter was privately betting on the number of workers who would be infected. He also worked to sabotage one fight after another at Kroger stores across the country, including Arkansas and Houston.

The way forward in this struggle is for workers to take matters into their own hands. Workers must act now to organize rank-and-file committees to oppose the end of the strike, demand sufficient time to study the contract and call for the widest possible support of workers across the region and country. in their fight against not just management but the UFCW.

the World Socialist Website, which has helped workers around the world form such committees in factories, schools and other workplaces, stands ready to help King Soopers workers. To contact us to start building a grassroots committee, fill out the form below.

We are building a network of rank-and-file worker committees in key industries and workplaces to stop the spread of COVID-19 and save lives, and prepare for a political general strike.