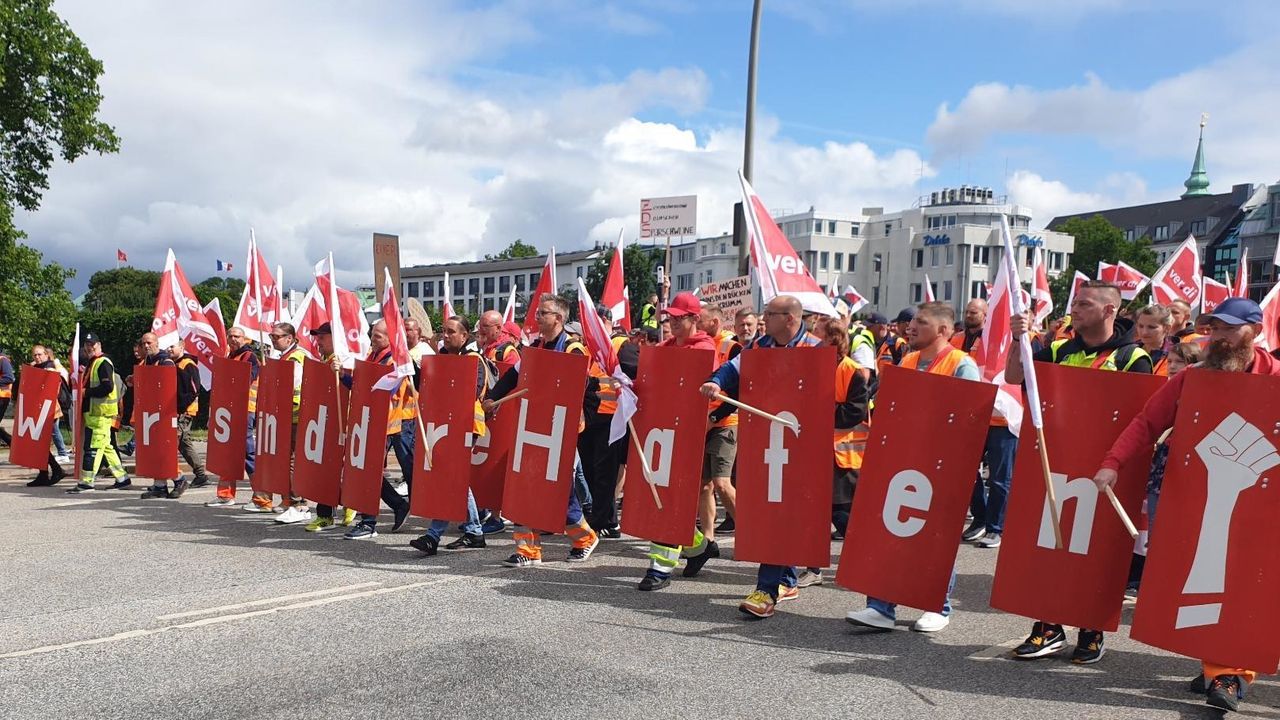 Port workers are expected to reject the agreement reached last week by the Verdi union with the Central Association of German Port Operators (ZDS). Contrary to Verdi’s presentation, this is neither a “very good result” nor a “real compensation for inflation”.

On closer inspection, the wage settlement turns out to be a sham. The announced salary increase is supposed to be 7.9 to 9.4%. However, the only elements included in the base salary are an increase in hourly rates of €1.20 and a flat rate of between €750 and €1,500. The so-called inflation allowance of €700 is a one-off payment.

Base salary increases vary across different port operations. In those carrying out full container operations, it is 7.7% this year and 4.4% next year; in other port operations, including car handling, it is 6.24% and 4.4% respectively; and in “operations which, because of their economic difficulties, are placed under special conditions to safeguard employment”, only 3.5% and 2.5%.

The media are presenting this agreement as an astonishingly high wage agreement. Verdi himself hails it as “the best collective agreement in Germany so far this year”. The 12,000 dockworkers it covers are led to believe that they have received “real” compensation for inflation.

But the sober facts paint a different picture. Firstly, the agreement, which only applies from July 1, 2022, when the old contract had already expired in May, does not cover the inflationary first half. Well-calculated percentages should therefore be halved, leaving only between 3.95 and 4.7% for 2022. On average, only 2 to 3.5% of this will end up in net salaries.

Second, Verdi completely ignores the miserable deal he made with German port operators in June last year. This was a measly 3% and meant a reduction in real wages as inflation rose above 5% from July 2021, and to 7-8% from March 2022. So this deal meant that the workers had suffered a substantial reduction in their real incomes. Nevertheless, Verdi had also called it a “great success”.

Third, during the 10 rounds of negotiations between June and August, Verdi assured its members that it would never agree to a contract length longer than 12 months. But the current deal lasts 24 months, six months longer than what the port companies themselves had proposed in June.

Although inflation is expected to remain high at around 10% in 2023, Verdi only agreed to a further maximum increase of 4.4% from July 2023. If the rate of price increase is above 5 .5%, an agreed clause provides that wages be equalized up to this threshold.

Verdi knows no shame and sells that extra percentage to compensate for inflation. In an attempt to silence the dockers, the negotiators are considering a “commitment to negotiate” in “the event of a rise in the rate of inflation”, with the possibility of a special termination clause in the contract.

The industrial struggle in the five northern German seaports, which Verdi now wants to end with this rotten deal, has been going on for more than three months. It is of great importance in several respects.

In addition to the Central Association of Seaport Operators and Verdi, the financial and business elite also have a huge stake in anticipating an all-out strike by dockworkers. The dockworkers can paralyze large parts of international logistics and so their strike wields great power. Companies and their political representatives fear that a large-scale industrial action by dockworkers in Germany could join a strike movement already underway in other countries.

Since the start of negotiations, German dockworkers have repeatedly shown their willingness to strike – for the first time in more than 40 years – for adequate inflation compensation in the face of rapidly rising prices.

In June and July, thousands of dockworkers took part in three warning strikes in the main seaports of Hamburg, Emden, Bremerhaven, Bremen, Brake and Wilhelmshaven, the last lasting 48 hours. The employers’ president, Rainer Dulger, took advantage of the warning strikes to call for a restriction of the right to strike and invoke a “national state of emergency”.

When the employers’ association defiantly canceled the seventh round of negotiations in July, Verdi refused to do what the dockworkers expected: declare the negotiations a failure, call a ballot and stage an indefinite general strike.

This only encouraged employers to go on the offensive; seeking to ban further strikes through court injunctions. Labor courts in Bremen, Oldenburg and Wilhelmshaven rejected it. The Hamburg court, on the other hand, doubted the legality of the strike decision due to a formality and advised a settlement.

Verdi accepted this decision with gratitude, voluntarily refraining from industrial action for six weeks and initiating the threat to vote on an indefinite all-out strike. During those six weeks, the port companies and Verdi then developed “new instruments” behind the scenes to undermine the port workers’ will to strike, with ZDS negotiator Ulrike Riedel declaring: “In a joint effort, we succeeded in finding a compromise, also with the help of new instruments.

In an Aug. 24 news bulletin on contract talks, Verdi made it clear that he would push through the deal ruthlessly in all workplaces and would not allow affected dockworkers to hold a strike ballot.

A “restitution phase” will take place in all companies until September 5, during which the results of the negotiations will be “explained” and discussed “in assemblies and company meetings”. Since members of Verdi’s Federal Collective Bargaining Commission (BTK) have already agreed to 90% of the new contract, according to the union, “BTK is refraining from conducting a member survey.” After the “discussion phase”, on September 5, the BTK will take the formal decision to recognize the result of the collective agreement, to which, according to it, there is no alternative. According to the BTK, there was “no possibility of improving the result obtained”.

The dockers should sow discord with union officials who want to impose this result on them. Nothing is decided yet and the dockers should make it clear to Verdi that they will not accept this sale.

To do this, we must immediately organize independently of Verdi. Verdi officials view port companies from the same pro-capitalist perspective as corporate executives, and there is a revolving door between union headquarters and boardrooms. For example, in the current round of collective bargaining, Torben Seebold, former head of Verdi’s specialized federal maritime industry group, sat at the bargaining table for the employers.

And like all trade unions in Germany, Verdi is closely linked to the Social Democratic Party (SPD), the Greens and the Left Party, parties that govern at the federal or state level. Verdi backs the federal government and its wartime policies, which place the cost of billions given to corporations and military buildup on the backs of the working class through massive price increases and bargain-basement deals. wages. The agreement in the ports also serves this purpose.

Dockworkers must create independent grassroots action committees that take up the fight for higher wages and cost-of-living compensation. First, they must pass a Democratic vote against the settlement, reject the BTK’s recommended resolution, and plan and launch a full-scale strike.

Second, they must unite in all workplaces, industries and countries to unleash the full fighting power of the working class. Millions of workers are also in conflict with employers and governments around the world. The most powerful allies of the dockers in northern Germany are the workers in the rest of the world who are suffering the same attacks. Ports are important nodes of globalized production, connecting workers around the world.

The time has come for an international portworker counter-offensive. Not only have the port owners made huge profits, but the power of the port workers has also become visible in the strikes staged so far. In Felixstowe in Suffolk, 2,000 workers have just concluded an eight-day strike at the UK’s largest container port.

Felixstowe crane operators, machine operators and stevedores have rejected an offer of a 7% pay rise from port operator CK Hutchison Holding Ltd. The Unite union, like Verdi here, did everything to prevent a strike. It was only under pressure from its members that it was forced to hold polls and reluctantly call for a longer strike. In WSWS interviews and discussions during the strike, many British dockworkers appealed directly to their German colleagues.

Workers in Germany, Britain and around the world have come under massive attack over the past two years, forced to work despite a pandemic, soaring living costs and working conditions intolerable. More and more workers are fighting back and responding with strikes and other industrial action.

The dockers in Germany who do not accept Verdi’s sellout and want to fight against the port corporations must contact us to form action committees and prepare the fight.