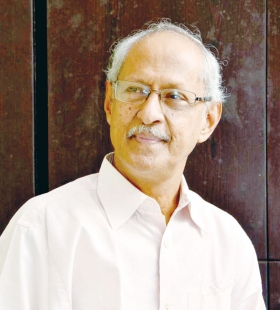 I feel terribly disappointed, said Damodar Mauzo; the official explanation does not appear to be the real reason, Prof Madhavi Menon said; canceling a dialogue is never successful. I have always found myself on the side of dialogue and communication, said Dr Suraj Yengde

By Vivek Menezes for O Heraldo

Govind Gaude is not responsible for the shocking and shameful cancellation of this week’s DD Kosambi Festival of Ideas, but that is the only thing certain about this shameful debacle. We also know – because it’s obvious – that this dynamic young minister was forced to pull the plug at the very last minute, even after the invitations had been circulated, but the who and why are entirely obscure, none of the speculation does not make logical sense. It is deeply tragic that after several years of disappointment, this year’s edition was uniformly superb, meaning Goa lost something truly significant for no good reason.

“I feel terribly disappointed,” said Damodar Mauzo, winner of the Jnanpith Prize 2022, who was not only to open the Festival of Ideas, but who also played the crucial role in the selection committee (of which I was also a member). .

“It’s not just because I couldn’t give my talk (which I had spent days preparing, and I believe others did too), but because I contributed to persuade other speakers to accept our invitations,” said Mauzo.

“On a personal note, my family members had bought tickets to attend, and I myself turned down two other invitations to prestigious events in Trivandrum and Mumbai to be here. It was absolutely shocking to learn of the cancellation, which unnecessarily tarnished the reputation of our state,” the Jnanpith award winner said.

Professor Madhavi Menon of Ashoka University was to speak after Mauzo, on The Law of Desire, which is also the title of his most recent book.

“I was very saddened by the cancellation. The official explanation didn’t seem to be the real reason. And if the real reason, as reported by the press, is the choice of speakers, then that’s very sad. J ‘was, and am, proud to have been included, and all of us are, I would like to think, not only intellectually rigorous, but also ethically committed to the cause of intellectual debate and critical inquiry,’ said the Professor Menon.

“Calling these traits undesirable is not appropriate for an event dedicated to culture, especially on behalf of such a brilliant thinker as DD Kosambi. Diversity is essential for survival. Intellectual debates are crucial for a democracy. And thinking differently is a skill to cultivate. Goa has for so long been a haven of understanding. I hope it will be the same in the future,” she said.

Dr Devdutt Pattanaik, a hugely popular bestselling author and illustrator of over 50 books, intended to talk about the spectacular diversity of the gods of Goa – “the various deities from Sateri to Mangesh to Betal” – and goes from ahead to do so via Instagram Live today at 5pm (@devduttmyth).

“I was surprised at the cancellation until I realized that there are some crazies who blocked the project. But I will still use the internet to share this interesting topic. Saraswati is free to roam everywhere – in Delhi and Goa too,” he said.

Each of the speakers scheduled for this year’s “Festival of Ideas” are stellar luminaries, bar none. However, Goa’s biggest loss is failing to listen to Dr. Suraj Yengde.

This brilliant young scholar and public intellectual – who is also said to have rekindled Kosambi’s connection to Harvard – has been thinking and working hard to understand and contextualize Goa, for several months in anticipation.

“The invitation allowed me to engage in the history of Goa and I even went to Portugal to better understand this paradigm. I was going to trace the lineage of Kosambis via the father, the great Dharmanand, an erudite scholar of the Sanskrit and Buddhist India. Until this invitation came, I did not pay attention to the Goa part of their history, but then I started to think about the Goa particularity of this history,” he said. -he declares.

Yengde said, “I was also going to invoke the hallways the Kosambis and I share at Harvard, and the libraries where they must have conducted their research and writings. Then I would delve into the issue at hand, the caste system and its flaws.

“The question of the evolutionary nature of caste and what that means for the materiality and spirit of a tradition must fade as a prolegomena of modernity takes shape. I would have presented case studies and research findings on caste, especially in India but in some parts of the world – this was the first time I discussed the upcoming book project in depth. The only other place where I presented this new research was Stanford earlier this year,” the famed researcher said.

It is extremely frustrating to see and hear Yengde’s enthusiasm for Goa, which he can no longer share on the state’s first intellectual platform: “I was introduced to writings and voices phenomenal like the scintillating poetry of Vishnu Wagh, the history of backward caste communities through The Work of Paresh Parobo, the exile of the Gomantak Maratha Samaj and the new era of Goan scholarship cutting the ceiling with Anjali Aarondekar, young Kaustubh Naik and Angela Barreto Xavier,” he said.

“I developed an affectionate friendship with certain writers from Goa whose love of literature and taste for genres were reciprocated. I was going to try to reinsert the scientific importance of Kosambi in caste studies, does not occupy a seminal role. He is treated with many prefixes, which sometimes works against a polymath. I will come and always do the above,” he said.

“I want to learn and grow by spending time with the brilliant minds of Goa and people in general. I wanted to make Goa accessible to the underlings of India who do not see this space as theirs,” added Dr Yengde.

Some people assume that Dr. Yengde is the reason why “the powers that be” suddenly got cold feet, but that would be particularly absurd: “Since I received the invitation, I have shared with many colleagues Goa government had invited me, and some raised a disappointed eyebrow because of the ruling party. This is precisely what I wanted to say to them: canceling a dialogue is never fruitful,” he said. he declares.

“I have always found myself on the side of dialogue and communication. Goa is different, I insisted. When they shared with BJP friends at the center, they wanted to come down to watch this event.

“After the news of the postponement, they sent me a message asking if I was still coming. A senior BJP official invited me to his state and offered me a meeting with the central leadership of the party later this month,” he said.

The final speaker this year was going to be Pranay Lal, the award-winning author whose Indica: A Deep Natural History of the Indian Subcontinent is one of the most treasured books of our 21st century.

“I was shocked by the cancellation as I did not expect a government supported event to be cancelled. But I have been dealing with pushbacks for some time. I have been thrown a chappal at a university when I mentioned species labels derived from names of Indian gods (Vishnufelis an extinct cat, Ramapithecus an extinct ape from the Siwaliks, which is actually named after Ramnagar where the first fossil was discovered). It is sad that academia has become callous and mean-spirited,” Lal said.

“I actually felt nervous when the organizers asked me to speak at the festival because DD Kosambi Sahab was a revolutionary thinker and an incendiary intellectual. It is sad that the Festival of Ideas that bears his name has been canceled , because the Kosambi family embodied a culture where ideas flourished.

“I hope that the people of Goa will stay in a space that will promote openness and protect the arts, science and free thought, and that books or paintings or indeed works of scholarship will be kept for posterity. I hope this is a one-time event and that intellectual freedom and the liberties of free-spirited individuals will be restored,” he said.