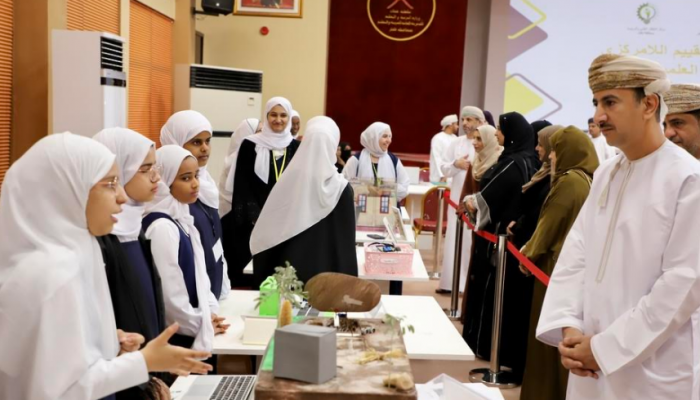 Muscat: Here is what is happening in the governorates of the Sultanate of Oman.

The Education Theater at the General Directorate of Education of the Governorate of Dhofar, represented by the Department of Innovation and the Scientific Olympiad, concluded the activities of the Exhibition of Scientific Innovations for the Development of Knowledge and Environmental Projects of the Globe at the level of the schools of the governorate for the year 2022 / School year 2023.

The exhibition included a decentralized evaluation of a number of student projects and innovations in the fields of science, mathematics, engineering sciences, energy, as well as information technology. , biology and the environment.

The exhibition aimed to introduce the mechanisms for evaluating scientific innovations and the necessary steps, and to acquire a culture of competition in this field.

The exhibition was attended by Sheikh Yaqoub bin Saif Al Shehimi, Director General of the General Directorate of Education of Dhofar Governorate, and a number of administrative and educational officials.

Foundation stone of monument to Chinese navigator Zheng He laid

A ceremony was held in the Wilayat of Salalah to lay the foundation stone of the monument project to Chinese navigator Zheng He, which was organized by the Embassy of the People’s Republic of China in the Sultanate of Oman in cooperation with the Ministry of Foreign Affairs and Dhofar Municipality.

The ceremony included a visual presentation on the design of the monument to Chinese navigator Zheng He using 3D printing technology, as well as an overview of the arrival of the ship Sohar in China and historical Omani-Chinese relations.

HE Li Lingping, Ambassador of the People’s Republic of China to the Sultanate of Oman, delivered a speech in which she highlighted the depth of historical relations between the Sultanate of Oman and the People’s Republic of China since ancient times, noting the role of the historic Maritime Silk Road in strengthening the friendship between the two countries.

The Chinese Ambassador to Oman spoke about some stages in the life of the Chinese navigator Zheng He and his visit to Oman, in particular the governorate of Dhofar in the 15th century AD, and his commercial sea voyages in the Western Ocean (l Pacific Ocean and the Indian Ocean).

Abdullah bin Khalid Al-Sulaimani, head of the operation of the East Asia Department at the Ministry of Foreign Affairs, gave a speech in which he explained that the volume of trade between the two countries amounts to 33 billion at the end of last year. .

Dr. Khalid bin Salim Al-Saidi, chairman of the Omani-Chinese Friendship Association, said in a speech that the association was established 12 years ago with the aim of promoting business and cultural communication between the Sultanate of Oman and the People’s Republic of China.

Al-Saidi said that the relations between the two countries are witnessing further development and progress in various fields.

His Excellency Dr. Ahmed bin Mohsen Al Ghassani, Governor of Dhofar Municipality, sponsor of the event, and the Ambassador of the People’s Republic of China accredited to the Sultanate of Oman laid the foundation stone for the monument project at the Chinese navigator Zheng He, whose construction should start early next year.

The establishment of the monument to the Chinese navigator Zheng He in the Wilayat of Salalah aims to strengthen the historical relations between the Sultanate of Oman and the People’s Republic of China, thus strengthening the bonds of friendship between the two friendly peoples of Oman and from China.

Port of Salalah receives Viking Mars cruise ship with over 1,000 passengers on board

The Port of Salalah welcomed the Norwegian cruise ship “Viking Mars” with 1,332 passengers on board, including 881 tourists as part of its tourism program in several ports around the world.

The sightseeing program for cruise ship passengers arriving from the Jordanian port of Aqaba and heading to the port of Sultan Qaboos in Muscat included visits including the most important archaeological and historical monuments for which the governorate of Dhofar is famous, in addition to visiting the beaches and markets of Salalah.

Abdullah bin Omar Al-Sabbah, deputy director of the promotion department at the general directorate of heritage and tourism in Dhofar governorate, said the movement of cruise ships is a pull factor in the growth of the season. winter tourism by stopping at the port of Salalah, and tourists roaming around the governorate, which brings added economic value to the Sultanate in general and to the Governorate of Dhofar in particular.

“The current season is expected to witness growth and prosperity thanks to the intensified promotional efforts by the ministry in partnership with all relevant authorities, tourism enterprises and shipping agents,” Al-Sabbah added. .

Ahmed bin Abdullah bin Shammas, head of department of tourism models and markets at the general directorate of heritage and tourism of Dhofar governorate, said that the ministry, in cooperation with tourism partners, succeeded in attracting more group trips. of European tourists, as part of its continuous efforts to promote the Dhofar Governorate throughout the year. The governorate has all the ingredients and elements of tourist attractions that allow it to become the favorite tourist destination for many visitors from different countries of the world.