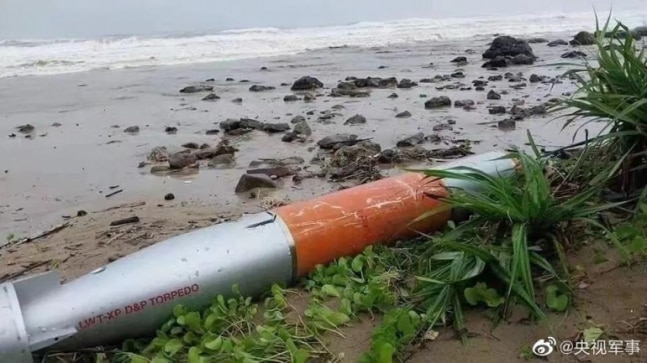 Viral footage of what appears to be an Indian-made torpedo washing up on a beach in the town of Munaung, Rakhine State in Myanmar, has raised alarm at the Myanmar security establishment and sparked an investigation of the country’s army. Images of the torpedo began circulating on social media on the morning of July 13 after a Twitter user shared four for the first time. Local reports claimed that residents of Munaung encountered the torpedo while enjoying a day at the beach.

Rakhine State in western Myanmar is near the Bay of Bengal. Security experts are analyzing how the torpedo ended up there, as the bay is frequently used by various navies for international military drills and exercises. For example, at the end of February this year, the Indian and US navies had participated in “Exercise Milan 2022” in the Bay of Bengal.

There has been no official comment yet from the Indian Navy on the discovery of the silver colored torpedo, which is said to have been inscribed with “D&P torpedo” and the serial number “LWT-XP”. “D&P” could stand for “exercise and practice” – a term frequently used to refer to inert training weapons and ammunition.

“Pending confirmation, each ammunition should be considered live and lethal, whether inert or not. Even without a warhead, weapons may contain other hazardous materials. Bystanders should never approach too close to them,” says Girish Linganna, a defense and aerospace analyst in India.

For context, Myanmar signed a $38 million (about Rs 300 crore) contract with India in March 2017 for the supply of an unspecified number of Shyena advanced lightweight torpedoes for its navy. The Shyena is the first indigenous lightweight anti-submarine torpedo to be deployed by India since production began in 2012. Myanmar received the first shipment of these torpedoes in July 2019. In 2020, India has donated a Russian kilo-class submarine, Sindhuvir, to the Burmese Navy. Sharing submarines and torpedoes is part of India’s Act East policy to counter China’s growing influence in the Indian Ocean region.

The nine-foot-long Shyena torpedo was developed by the Naval Science and Technology Laboratory of the Defense Research and Development Organization (DRDO) for the Indian Navy. It is designed to be launched by specific ships, submarines and helicopters which are among the assets of the Indian Navy.

While orange appears to be the color frequently used in the design of the Shyena torpedo, images of the torpedo that have surfaced at Munaung show a silver coating with thick orange stripes. The fact that bright colors are used to facilitate the retrieval of ammunition after training exercises supports the theory that said torpedo could be a training ammunition.

Apparently, the Myanmar Navy had recently issued a warning in Rakhin State about naval exercises scheduled between June 23 and July 9. Local people have been told to stay away from the seafronts for specified periods. However, information regarding specific military drills has not been shared.

Linganna said such warnings usually precede exercises that involve some form of live-fire component, whether test firings of torpedoes or anti-ship missiles. Protocols, however, may be different in Myanmar which, in the words of UN human rights chief Michelle Bachelet, is now increasingly plagued by civil unrest.

Torpedoes used in training are usually recovered after military exercises, such as during “Sea Shield 2022” held in Myanmar in July. Reports of bad weather during the training may have compromised the recovery process, i.e. if the torpedo in question was part of this military exercise.

This is not the first time that people living in coastal areas around the world have come into contact with munitions. Last year, a US Air Force BQM-167A target drone loaded with expendable decoys ran aground in Palm Beach County, Florida. In 2020, an Indonesian fisherman discovered a Chinese underwater drone not far from Selayar Island.